What happens to waterfowl in an oil spill?

Board members of the Friends of Ecological Reserve have expressed concern about the risk of Oil spills with projected taker traffic past our BC Ecological reserves :https://ecoreserves.bc.ca/category/issues/oil-spill-threat/

Our major concern has been the many Ecological reserves which have been created to provide habitat and shelter for the millions on Shorebirds that nest in British Columbia.  No amount of mitigation can be done for most of the birds that get caught in an oil spill. This article addressing that issue appeared in the Straight.com online news source:

Dee Walmsley: What happens to

waterfowl in an oil spill?

“Oil spill”—these words evoke visions of devastation and suffering. Black ooze coats the wings and bills of helpless seabirds. Deadly vapors permeate the air. The putrid stench burns our lungs and scars the memory. Ebony mousse seeps into the sands, suffocating invertebrates and crustaceans en route. Like a tentacle, the black tide reaches for the shore, killing all in its path of destruction. 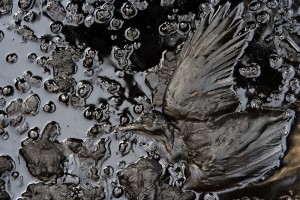 Wildlife rehabilitators’ and response organizations’ hearts fill with dread as they immediately deploy their skimmers, booms, and absorbents, and initiate care facilities. In a matter of hours, the first shivering, sick seabirds will arrive. The initial response is the capture. Oil-sick birds make their way to shore and hide amongst rocks, logs, and natural debris. Each step in the capturing, caring, cleaning, and rehabilitation is as important as the next.

Stress on workers and animals must be kept to a minimum, respecting each bird’s trauma. With the use of a towel, blanket, and net, the trained volunteers, working in pairs, must slowly and quietly maneuver the bird into a situation where it can be captured. The bird’s first line of defense is to re-enter the water; therefore, the volunteers must position themselves between the water and the bird. Voices are kept low, decreasing the stress level on the birds; hand signals are recommended. Eye contact, another stress factor with wildlife, is kept to a minimum as the ducks are circled, herded, and captured.

Once the bird is netted, the towel is used as a wrap to soak up excess oil and to retain body heat while transporting the oiled-drenched bird to the stabilization unit. Ventilated computer-paper boxes or pet carriers serve as cages en route.

Ideally, a triage would be carried out on the beach. This consists of sorting the birds—the injured and sick, the malnourished or dehydrated, and those that are oiled but healthy enough to wait until they reach the centre for care. In a large spill, most birds with physical injuries would then be euthanized immediately.

Cleaning oil-soaked waterfowl is a very labour-intensive process, requiring tedious hours of work per animal. Many do not survive. Vapors inhaled while trying to escape burns their lungs. Oil burns their skin; oil on feathers causes the ducks to preen, and with ingestion comes more fatalities as the black death slips into their bodies, burning everything in its path. The bird’s loss of waterproofing causes death by hypothermia or drowning.

Anemia is also a factor. Studies have shown that for every bird that is captured alive, five die a slow death in the water. A number of birds involved in oil spills are diving ducks. They never come ashore. Adding to the shock of being oiled and handled is their limited contact with humans. This trauma alone can kill the birds. Inexperience in handling on the part of unskilled volunteers may also injure or kill them.

Prior to washing a bird, it must be stabilized. Eyes, nares (nose), beaks (bills), and mouths are cleaned of oil with a saline solution and cotton swabs. The birds are then rehydrated, warmed and, in some cases, flushed out to combat the toxicity of ingested oil by tubing with a charcoal mixture.

Tubing is a simple procedure that requires inserting a catheter-tip syringe or a feeding tube into the bird’s stomach. This procedure is used for warming the animal with a heated solution of electrolytes, feeding a sick bird, or, as mentioned, cleaning out the gut. This task is best accomplished by using two volunteers; one holds the bird, while the second person inserts the tube down the creature’s throat. Experienced wildlife rehabilitators are able to perform this procedure one-on-one.

After the initial examination at the stabilization unit, the birds are fitted with a numbered band, and an admittance form is completed with particulars of the capture site, type of oil, degree of oiling, species of bird, weight, temperature, abnormalities, and feeding schedule. They are then placed under heat lamps to await their first washing procedure. Only when the contaminating oil is known to burn, as in the case of gasoline or jet fuel, is the bird cleaned immediately. Studies have shown that, by allowing the bird to rest and feed for about 48 hours, their chances of survival increases. Periodic checks are made for overheating, tube feeding, and the birds’ general condition.

Two volunteers spend a minimum of 45 minutes removing the oil from each bird through a series of baths. The water must be soft and hot—102 to 110 degrees Fahrenheit (39 to 43 degrees Celsius). A degreaser such as Dawn dishwashing soap must be measured according to the viscosity of the oil. The same amount of time is used in the rinsing procedure. When the bird is completely cleaned, water will bead on the feathers and the feathers will appear dry. They are then ready for the dryers. Eye drops (artificial tears) are administered and the feet are treated with KY jelly to prevent cracking.

Drying may take from 45 minutes to two hours depending on the type of bird. The pens are large mesh-bottomed holding tanks fitted with removable separators. Pet dryers are attached in the corners. A sheet is used to cover the entire area once the birds have been placed inside. Careful consideration of species compatibility is mandatory; therefore, the ducks are separated as deemed necessary by the rehabilitators. Once completely dried, they are placed into clean water where they are carefully monitored for waterproofing and post-trauma shock. Some birds will begin to eat on their own whilst others have to be tubed and or hand fed. Periodic weighing and blood tests will follow.

When the birds have regained their waterproofing and are healthy, they are released back into the wild. The cost of saving each bird is approximately $75, which without the services of volunteers would be considerably higher.

It should be noted that B.C. has no designated site to carry out the above procedures. This needs to be part of the planning process prior to any spill.

Prevention is the only real alternative. Tighter restrictions on ships through legislation, spill prevention plans, double hulling, inspections, and response drills will help to minimize the risk of oil spills. Being prepared will enable responders to do their jobs more efficiently and with less stress to the workers and wildlife.

Oil spills not only kill and pollute our environment; the health hazards to humans are only now being studied. The results are linking cancer and other diseases to the list of maladies caused by coming in contact with this toxic substance.