and What are Ecological Reserves?

How did they originate?

Between 1964 and 1974 Canada participated in a decade of research known as the International Biological Program (IBP), a worldwide endeavor involving 58 nations. A subcommittee for the Conservation of Terrestrial Communities (IBP-CT) was created, aimed at the establishment of a system of representative terrestrial and aquatic ecosystems around the world.

In Canada this was largely funded by the National Research Council, and involved the description of biologically important sites on standard international check-sheets. Nearly 1000 check-sheets were completed in Canada, placing this country at the forefront of IBP-CT efforts, along with Australia and the United States.

The next step was to legally and permanently protect the identified lands, as an effective conservation program requires more than identification and description of important ecosystems. Most public lands in British Columbia are under provincial jurisdiction so the provincial government became involved. 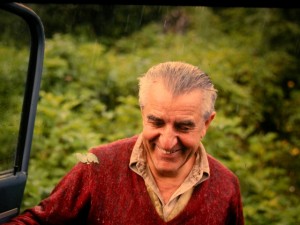 Encouraged by the late Dr. Vladimir Krajina (at left, former professor at the University of British Columbia) and other scientists, the government of BC agreed, in 1968, to form an Ecological Reserves Committee that would advise on the selection of potential reserve sites. A year later, the government formally embarked on setting aside ecological reserves under the Land Act.

A list of the reserves proposed at the meetings between 1968 and 1984 is contained in this 44 page PDF file.

In 1971, the Legislature gave unanimous approval to the Ecological Reserves Act. With this act, British Columbia became the first province in Canada to formalize and give permanent protected status to ecological reserves. Quebec, the second to do so, established a similar act in 1974, and New Brunswick in 1975.

Other provinces have since enacted similar legislation, or use other legislation such as Land, Park and Museum Acts for designation of natural areas.

On May 4, 1971, the first 29 reserves received protective status by Order-in-Council – a conservation landmark for the province. A full-time ecological reserves coordinator was hired in 1974, regulations related to use and protection of the reserves were enacted in 1975, and a volunteer warden program put into effect in 1980.

How are Ecological Reserves created?

Prior to the 1990s, any member of the public could propose an area as an ecological reserve.

In the past, proposals have been put forward by scientists, educators, government agencies and naturalist/conservation groups. Proposals submitted were reviewed by BC Parks to determine the significance of the natural values present, the relationship of the area to other ecological reserves and protected areas, and whether the proposal filled existing gaps in the ecological reserve system. Following the review, proposals were referred to all interested government ministries and agencies to ensure conflicts with other land or resource uses were not present. Where values were considered significant and land use conflicts were resolved, the proposed area was designated by provincial order-in-council under the Ecological Reserve Act.

In the 1990s, the provincial government embarked on a province-wide program of land use planning. At the regional and sub-regional level, round-tables were established of government agencies, First Nations, public stakeholders, environmental organizations and industry representatives.

Recognising the importance of the identification and dedication of a system of natural features and communities representative of the geographically and biologically diverse environments of BC, the Protected Areas Strategy was developed with two primary goals: to protect viable, representative examples of natural diversity in BC; and to protect special natural, cultural heritage and recreational heritage features.

In order to meet the goals of the Protected Areas Strategy, the land-use planning tables worked to determine land use designations over set geographical areas, including in their decisions the selection and designation of protected areas and the type of designation that they would receive (Park, Ecological Reserve or Protected Area).

The Benefits of Ecological Reserves

Ecological reserves are established for the maintenance of biological diversity. They assist in developing and promoting an environmental consciousness and provide outdoor laboratories and classrooms for studies concerned with the natural environment and they are benchmarks against which environmental changes can be measured.

As many ecological processes are as yet poorly understood, today’s scientists cannot predict some of the questions that will require research in unaltered ecosystems. Ecological reserves keep our options open for the future. Ecological reserves provide a “genetic data bank” which may hold the key to new discoveries in forestry, ecology, agriculture and medicine.

Ecological reserves contribute to the maintenance of biological diversity and the protection of genetic materials. Appropriate research and educational functions are the primary uses of ecological reserves. They are not created for outdoor recreation and should not be confused with parks or other recreational areas.

Most ecological reserves, however, are open to the public for non-consumptive, observational uses, such as nature appreciation, wildlife viewing, bird watching and photography. Parks and ecological reserves, although serving somewhat different purposes, complement one another. Together they provide a wide range of opportunities for people to experience and learn from the natural world.

The management and protection of ecological reserves is the responsibility of BC Parks.

All consumptive resource uses, such as tree cutting, hunting, fishing, mining, domestic grazing, camping, lighting of fires and removing materials, plants or animals, and the use of motorized vehicles are prohibited in ecological reserves. Visitors to ecological reserves are asked to co-operate in caring for these areas and some reserves, notably seabird nesting colonies, are so sensitive that access is only allowed under ministerial permit.

More information is available about ecological reserves at the links below:

Research and Education in Ecological Reserves