I have had an ongoing question about the native Common Reed grass Phragmites australis var americanus  and its occurence in Ecological Reserves . Two Reserves have had it listed in plant surveys in the past, but I have been unable to determine whether it still exists in those reserves.
Recently, John Field, the Ecological Reserve warden for Ambrose Lake ER wrote the following:

“Regarding Phragmites, the Wildlife Society’s survey in 1988-1991 did not record it, which in retrospect is surprising.  Dr Kay Beamish, who first found the species at Ambrose Lake ER in 1977, was an active consultant and participant in our survey, including doing most of the plant identifications.  I wish I knew where to look for it, but I’ll keep it in mind for future visits to the reserve.  Judging by its size, it should be easy to find!    “
John.

The Purpose statement lists it as one of the species:

The first record of it is In the 1968 Species List of Beamish :

However In 1982 Lynne Milnes and Sydney Riley did not include Phragmites on their list:

In the Species lists complied  from May 1988 to June 1991 by John Field for the Pender Harbour and District Wildlife Society,  Phragmites was not recorded 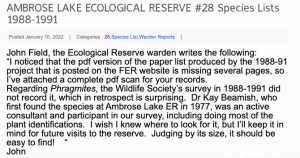 The other Ecological reserve where Phragmites was identified was The Galiano Island Bog ER.  again it is listed in the Overview statement

A comparison was made of HarveyJanzen’s and Hans Roemer’s reports:

Here we note that both Roemer and Janzen recorded it in 1980 , and Hans Roemer recorded it again in 2000.

In 2012 Samples were collected for DNA and morphological data by B.Brown and B. Smith. the table below is from the list of locations in BC where samples were taken. At that time the population in the Galiano bog still existed. 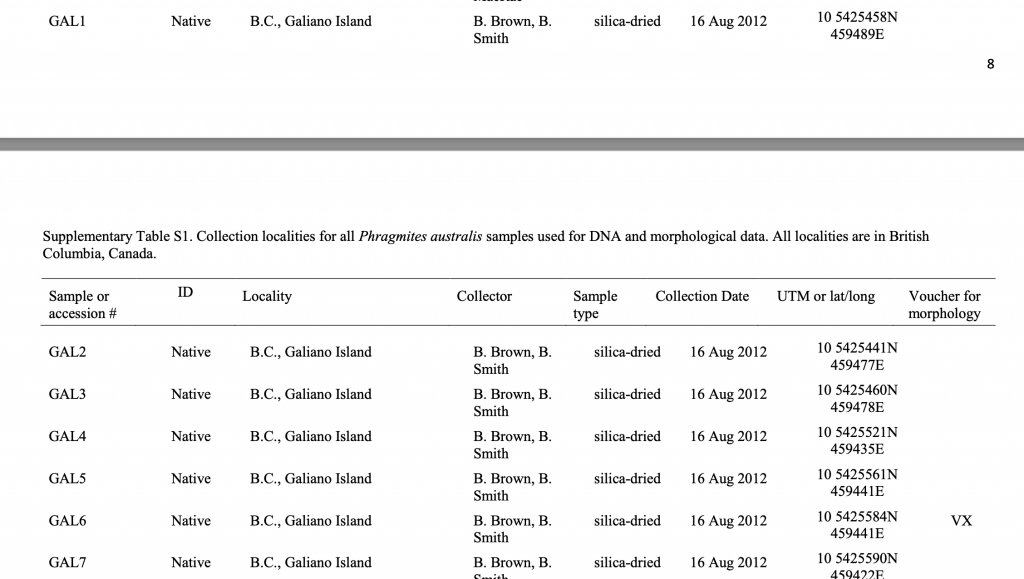 So the mystery is not solved yet, and we have yet to find any evidence of it still occurring in the Galiano Bog. I am hoping that it never met the fate of mistaken identity as almost happened in the case I have referred to in the report I have linked here about the native Phragmites species from my Metchosin Coastal website :

A new Lease on Life for the Rare Marsh Plant: Phragmites australis subsp. americanus–A note of caution when attempting to control Invasive Species

Abstract:  Phragmites australis (common reed) is a wide-
spread perennial grass of wetland habitats, with cryptic native and introduced subspecies in North America. We determined the relative abundance of the subspecies and the distributions of plastid DNA haplotypes throughout British Columbia, Canada, at the northwestern distribution limit of common reed in North America. Of 203 specimens assigned to subspecies using molecular markers, we identified only 9 plants as the introduced ssp. australis; all remaining samples were the native ssp. americanus. The two subspecies co-occurred at only one locality. We identified four native haplotypes (one wide-spread in British Columbia and three others more localized) and two introduced haplotypes. Using plants of known haplotype, we assessed the utility of different morphological traits and trait combinations for distinguishing native and introduced subspecies in this geographic region. No single morphological trait was diagnostic, but principal components analysis and identification indices based on combinations of traits consistently separated the native and introduced subspecies in our sample. Two- or three-trait combinations of ligule length, lemma length and stem anthocyanic coloration gave the best separation. These indices could reduce the need for confirmation of the introduced subspecies using molecular tools, facilitating efforts to monitor and control this invasive plant.