BRYOPHYTES ON THE SUMMIT OF PINK MOUNTAIN

BRYOPHYTES ON THE SUMMIT OF PINK MOUNTAIN, NORTHERN BRITISH COLUMBIA 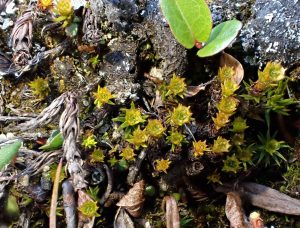 The bryophyte diversity in northern British Columbia is insufficiently studied. We conducted a bryophyte survey in a 2.2-km2 proposed ecological reserve at the summit of Pink Mountain in the Peace River District of northern British Columbia. Pink Mountain is at the southern periphery of the ranges of several arctic flora species as well as the northernmost reaches of other temperate flora species. The south summit of Pink Mountain has a high floristic diversity coincident with its limestone geology, which provides a more alkaline condition for plant growth than the north summit does. We documented 65 species, including 2 new provincial records for British Columbia (Polytrichum hyperboreum and Tayloria hornschuchii), one red-listed (threatened) species (Tortula systylia), and one blue-listed (at-risk) species (Mnium arizonicum). Polytrichum hyperboreum and Tayloria hornschuchii have affinities to habitats more typical of polar regions. The presence of P. hyperboreum at Pink Mountain represents a southward range extension from 61°33′ N in western North America. Because isolated populations at species distribution limits are likely to be vulnerable to climate change, the establishment of an ecological reserve on the south end of the summit of Pink Mountain is important for the preservation of bryophyte habitat.