COMPOSITION
Physical: The bog, about 900 m long and 125 m wide, lies in an elongate depression
between NE-SE trending ridges of Cretaceous sedimentary rock. It has a
centrally located open-water area about 0.5 ha in size, and drains southward to
Trincomali Channel via an intermittent stream. Soils in the bog are primarily
Fibrisols and Mesisols. The climate is characterized by a winter precipitation
peak and summer drought.

See the full PDF : galiano
Biological: The predominant bog vegetation consists of ericaceous shrubs and sphagnum
moss, a wetland association that is rare in the Coastal Douglas-fir Zone. Three 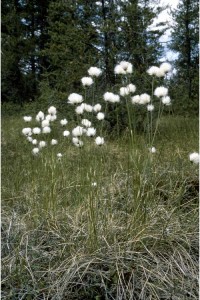 Ten species of rare plants have been identified in the reserve, nine of which are
in the categories of least rarity. The other species, pointed rush, was previously
known from only five locations in the province. Regionally uncommon bog
plants found here include bog rosemary, bog cranberry, round-leaved sundew,
Chamisso’s cottongrass and arctic starflower.
Beaver are present and periodically dam the outlet stream, causing variations in
water levels in the bog. Faunal surveys have not been done.

Climate Change: Bogs have been assessed as vulnerable to climate change due to
projected changes in hydrology and increasing temperatures, both
of which may contribute to altered water levels and quality and
subsequent shifts in community composition.