Eagle Ridge is mentioned in part of this report: 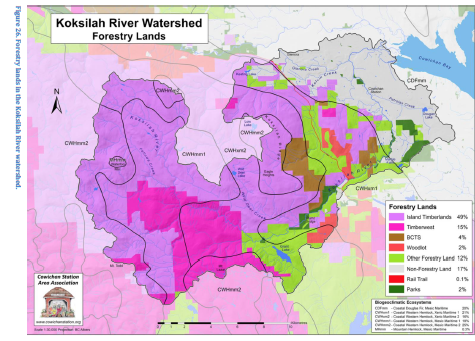 The approximately 30,000-hectare Koksilah River watershed is a place of deep human history and immense ecological richness. Like all watersheds, it is a drainage basin comprised of many smaller drainage basins—where mountains and hillsides are like the edges of a bowl, guiding water to drain downhill into streams, rivers, lakes, and aquifers. From the sub-basins that feed the 44 km-long Koksilah River, to the smallest puddles found in the forest, each is a watershed that is connected to another that is larger or smaller. The highest ground in the watershed also creates a natural boundary, defining distinct (although still interconnected) ecological units. The use of ecological boundaries to define a study area is fundamental to undertaking an ecosystem-based assessment, and is the starting point for this assessment of the Koksilah River watershed.

The Koksilah watershed is located on Vancouver Island, south of the City of Duncan—the nearest urban centre. It is primarily located within the political boundaries of the Cowichan Valley Regional District (CVRD), with a small portion of the upper watershed located in the Capital Regional District. Within the CVRD, the watershed spans five electoral areas: B – Shawnigan Lake, C – Cobble Hill, D – Cowichan Bay, E – Cowichan Station/Sahtlam/Glenora, and F – Cowichan Lake South/Skutz Falls.

The mountains of the upper and middle watershed form part of the Victoria Highlands physiographic region, a transition zone between mountains and lowlands, that is characterized by gently sloping mountains interspersed with deeply incised valleys (Trofymow et al. 1997). Within this region, the Koksilah River and its many tributaries eventually join the Cowichan River, where together they flow into the Cowichan Bay estuary– the ecosystem where freshwater from the rivers meets tidal saltwater.

It is along Koksilah Ridge where one of the first Quw’utsun’ (Cowichan) people fell from the sky, and along the Koksilah River where, for thousands of years, many Quw’utsun’ people fished and called home. In addition to the Quw’utsun’ people, the watershed has been home to many species of animals, plants, fungi, and microorganisms. Even the water itself has a spirit, as discussed later in this report. In recent history, the watershed has become home to a large settler community, whose livelihoods and well-being also depend on the ecological health and integrity of their environment.

Full of life, the Koksilah watershed can easily be seen as a living entity in and of itself. We attempt to capture this essence in the descriptions of ecological character that follow. We then move on to a discussion of the watershed’s current condition, where we find many indications that the future of the watershed is in a delicate position. We hope that this report inspires both conversation