May 10 – first seasonal visit to ER. Observed lots of Russian Knapweed growing inside and outside the south fence. Recorded Killdeer, Spotted Sandpiper, Mallards, Barrows Goldeneye, Bufflehead, and Northern Shoveler on the lake. There were fifteen species of songbirds as well. Picked up garbage at the pullout by the sign.

May 22 – took pictures of the Russian Knapweed for Senior Ranger Sara Bunge. Cleaned graffiti off the information sign. There was little garbage this time.

May 26 – received email from Sara regarding plans for Russian Knapweek and photographic monitoring.

July 26, 29 – Cut Russian Knapweed and pulled Blueweed along southwest fence; found none on the southeast side this year.

August 2 – Received email from Sara saying plans were to treat the Russian Knapweed chemically rather than cut it again.

September 26 – Took pictures from monitoring points for annual records. Sara was treating Russian Knapweed with glyphosate. Water level appeared to be lower than in previous years; could smell sulfur.

October 9 – Took Garry Fletcher from Friends of Ecological Reserves and his friend Niran Lella on a tour of the ER. The water appeared quite purple, and a line of purple structures was visible along the east shore. While we were near the east pullout, a group of three young men came along with a bag of chips and a bottle of wine . We pointed out that the location was an ER, not a party spot, and warned them about a cigarette one was carrying. We drove down to the south side and walked down to the water, keeping an eye on them. After about fifteen minutes, they left. Two adults and a small child also stopped to read the sign while we were there.

Found another patch of Russian knapweed on the northwest corner of the “hump.”

November 29 – took pictures of water to show Garry Fletcher how color had changed. Cleaned up much fireworks garbage at the pullout. Noted that south fence near Russian Knapweed was down.

Suggestions for next year: 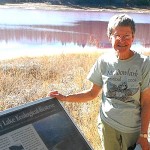 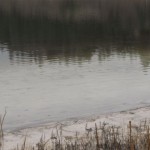 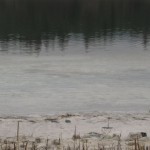 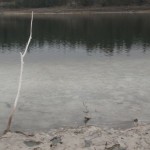 Kathryn took these pictures at Mahoney Lake about six weeks after Garry’s visit from pretty close to the spot on the east side from which his pictures were taken. As you can see, the purple had receded considerably. The day was cloudy, so the water wasn’t as blue, either.

For other images of the Lake see the Photo index at https://ecoreserves.bc.ca/category/130+photos/