Ed Note: I am including this as it refers to four of the Marine Ecological reserves of BC.,  three on sets of islands which are in the direct path of the proposed tanker route:  See the map at: https://ecoreserves.bc.ca/?p=14583

Thank you for inviting me to speak to this panel .

My name is Garry Fletcher and I live in Metchosin, on the coastline south of Victoria. 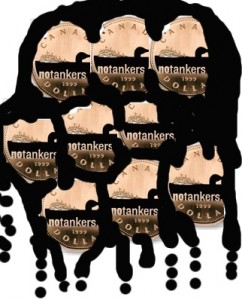 Adapted from the No Tankers decal of The Dogwood Initiative

For this submission I have 5 parts:

First –My rationale for objecting to the Northern Gateway project, and then 4 concerns selected from many.

I grew up on the prairies, and  have a good  appreciation for what little most land-locked Canadians know about our oceans—That water we see out there—, its not a lake!

So I hope the panel gives highest priority to the opinions of BC citizens.

I retired 9 years ago having taught Biology, and Marine Environmental Systems  at  Lester Pearson College on the southern tip of Vancouver Island for 28 years. I also taught scuba diving to over 300 students in that time,

In 1980 my students in Diving and Marine science persuaded BC Parks to create the Race Rocks Ecological Reserve in the Strait of Juan de Fuca where  I still volunteer as  warden,  and for which I run the  educational website racerocks.com .

In the early nineteen eighties, an unidentified  ship passed through the Strait of Juan de Fuca dumping oil perhaps from bilge or a leak. The next day from our dive boat on our way to Race Rocks, my students and I captured 26 oiled Common Murres which we took to the SPCA for cleaning or euthanasia.

Perhaps everyone needs to go through that experience in order to realize how vulnerable Marine animals are to oilspills, and how helpless  WE  are to do anything about it.

You have already heard of the 1988, Nestucca disaster,  well, my students and I captured oiled birds in Sooke, the following week,  and later gathered garbage bags full of mats of sea grasses, and dead seabirds, on our shores within two kilometres of Race Rocks. Rarely is rehabilitation successful. The gory saga doesn’t end there, as oiled birds then become part of the food web. ( and I have brought the panel a small sample of that spill with a mat of seaweed– still perfectly preserved after 24 years.)

After that, I was asked to sit on the Oil spill committee , started by David Anderson to advise the government on Policies regarding the transport of crude oil along our Coast. I went to seminars learning how to clean oiled birds, and watched boom deployment from a ship in Prince Rupert harbour, and then we were disbanded…change of provincial government priorities?

In 1994 I received training for the BC Marine Oil Spill Workforce from the Environmental Emergency Co-ordinating office of BC’s Department of the Environment, and still have my card from them although no one in government remembers that phase.

I wonder whatever happened to those government initiatives, designed to involve the public in monitoring the oil industry, and coming to the help of the environment when disaster strikes.

So now I use the Race Rocks Ecological Reserve as a model for many of the islands and coastal areas up and down Vancouver Island. I know first hand what lives there, from the tidepools to the bottom sediment.  In that Ecoreserve alone , we have recorded 370 species of animals,  including 77 bird species and  13 species of marine mammal. Probably only a tenth of the biodiversity that is really there.

I have experienced first hand the interrelationships of many of the species.  Not only those  with so-called direct commercial value, since those species only survive by intricate linkages with other seemingly insignificant ones. This allows me to know also of the incredible risks posed in our coastal waters when even one disaster occurs.  I cannot ignore that if oil from a disaster spreads anything like that of the Exxon Valdes, It would blanket the coast of BC.

Perhaps  this project has triggered a threshold for what  we are prepared to accept as progress. We can no longer accept that  large corporations and governments concerned mainly with immediate profits make decisions which forever jeopardize our cherished values.

I have many concerns about this project but only time to submit a few:

I understand it is part of your  mandate to look at this— As soon as you start looking at isolated examples in a little box you destroy the integrity of how things really work. I hope your review is inclusive of all aspects of our Natural Capital, from the geological realities of this coast and  the untameability of the ocean to the ecological integrity of our ecosystems

is the effect on humans, and in particular the effect on First Nations people. They have evolved along with the ecosystems. The slightest disruption of that way of life, when they do not choose that path as we have seen in so many examples in Canada, can lead to untold social problems in the future. Natural ecosystems to some extent, can recover over time. There are very  few examples where cultures impacted negatively by so-called development can recover over time.

Can we Trust our Governments to Protect even the basic needs of our Environment?

You have already heard in Monday night’s presentations about  the long history of inaction and delay on the part of government regulators.

Now I am deeply concerned with the omnibus bills of the Harper government stripping critical regulations,

seriously compromising the environmental impact assessment act, the inland Waters act, and the fisheries act , giving industry free reign to ram through projects having serious implications on water quality, ecosystems, climate change and public health. Why were significant rivers in BC such as the Kitimat and Upper Fraser which lie along Northern Gateway pipeline, excluded from the  Schedule of ‘protected waters.’?

These changes highlight a larger problem : – that the Harper government is shirking responsibility in several critical areas including a long term energy strategy and water protection strategy as well as respect for First Nations Treaty rights

—-no wonder that even as these hearings proceed , two First Nations bands take  the federal government to court to protect the environment in their ancestral lands , and the” Idle no More “movement gains momentum.

How can we take seriously our government’s platitudes  about concern for environment when such backwards thinking and policies prevail.

Concern #3——- The Vulnerability  of our Coastal Ecological reserves:

Among many protected areas along the coast, I am especially concerned for the fate of 12 Ecological Reserves from Haida Gwaii to the north end of Vancouver Island, at risk from tanker traffic in Hecate Strait.  Please have a look at ecoreserves.bc.ca, and understand what scientists have determined is special about Dewdney and Glide Islands  with nesting sandhill cranes,  or the Byers/Conroy group with 100,000 nesting seabirds.. or Moore Island with 40,000 pairs of nesting Rhinocerous auklets.  These islands just outside  of Douglas Channel support  many of the breeding colonies of seabirds on the West Coast. And what about the habitat protection for four species at risk that our federal government is by law required to achieve along the very route proposed.

If the trajectory of ocean currents spreads out anywhere near as far as the Exon Valdez spill did , then all of the coast of BC could be vulnerable in the event of oil disasters.

Concern # 4——Can we really trust Enbridge ?

They have spent thousands of dollars on advertisements greenwashing the project, and their website assures us that everything is under control.  But their record from the recent past has not bought out my skepticism.

The chairman of the National. Transportation Safety  Board in the US, showed that Lax Canadian as well as US regulators share blame with Enbridge  for the massive 2010 bitumen spill in Michigan.

Both Enbridge and its public regulators were found to be guilty of negligence and incompetence during the costly rupture which contaminated 38 miles of the Kalamazoo River with toxic diluted bitumen,  or Dilbit, a corrosive dilutant containing carcinogenic Benzene among other nasties which is used to be able to move the heavy tar sludge from the Tar sands of Alberta.

Another report From the Globe and Mail Nov 23rd 2012

About 900 barrels of crude oil leaked from an Enbridge Inc. facility near Chicago this week ——-

Just one  example of how Enbridge plans to deter  disasters leaves me skeptical.

On their  website  they state confidence in being able to predict weather patterns along the marine route in Douglas Channel because of  the installation of the new Meteorological stations .

In  Appendix A: of the 2012 technical data report by  Hayco , the  station descriptions of the six weather stations along the route in the Douglas channel is very disconcerting

Only one of the 6  stations, has a  good location for a meteorological  tower–

The remaining 5 stations however are not so encouraging :

Example:  Kersey Point —and I quote:

“The tower is located just behind the navigation aid on the narrow rocky shore up against the trees. The station is exposed to winds from the north, east and south, however winds from the west will be blocked by trees and Maitland Island.”

And likewise  for the other 4 met stations along Douglas Channel, always a wind blockage from at least one direction.

Just what kind of wind readings  do they expect to achieve from these six stations, when 5 of them have blocked access to the weather. Are we to believe that they have an adequate early weather warning system for the area??

And my last concern: The real Economic Costs.

“An Economic Assessment of Northern Gateway,” from Robyn Allen,  former CEO of the ICBC where  she concluded that “Enbridge doesn’t have adequate insurance coverage or the corporate structure to cover a multi-billion dollar spill either.

And then in December we hear of the UBC Fisheries Centre Study : ” the cost of cleaning up a major oil spill on the North Coast of B.C. could hit $9.6 billion, as well as accost to commercial fisheries, port, ferry transportation and tourism industries of more than $300 million wiping,  out any economic benefits from the project for the region, in which the study says ” Each year, ocean-based industries on the North Coast of B.C. generate about $1.2 billion, provide employment for more than 9,000 people and contribute approximately $700 million to GDP.

How can anyone justify a project of this scope if what  these expert say is true? Has the project not always been about  Enbridge making more profits, and never about any benefits to impacted communities or Canadians.

Hopefully Canadians east of the Rockies will learn that this pipeline and tanker project means higher gas prices which the Harper government needs to keep up its agenda.

These are only a few of my concerns. I sincerely hope they will help the panel in rejecting the Northern Gateway Proposal.

For further information on the National Energy Board hearings see the following:

Here is a link to the transcript January 7th. with the presentation of Mike Fenger.

You can also read Mike’s presentation on this website .