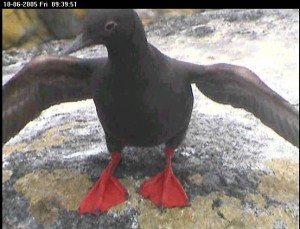 The ecological reserve comprises a group of low-lying islands, islets, and reefs along the east side of Hecate Strait. The largest island, South Moore, makes up most of its land area. The islands are deeply incised, and have generally rocky, sloping shorelines with few cliffs. Though exposed to the southwest, the effects of surf are probably moderated slightly due to protection given by the Queen Charlotte Islands, (now Haida Gwaii) which lie to the west.

Fork-tailed storm-petrels nest on the smaller islets; Leach’s storm-petrels use both the small islets and headlands of Moore Island. Scattered pairs of Cassin’s auklets nest on the small outer islands, as well as about 30 pairs of tufted puffins and 40 pairs of glaucous-winged gulls. An unknown number of ancient murrelets are present on South Moore and the smaller islands. At least 40 000 pairs of rhinoceros auklets nest on Moore Island. This island also supports numerous pairs of pigeon guillemots, and is a probable nesting place of marbled murrelets.
Other birds thought to nest on the islands but not confirmed, include the black oystercatcher, belted kingfisher, northwestern crow, chestnut-backed chickadee, winter wren, varied thrush, and Swainson’s thrush.