The e-mail at the end of this file offers a  new video and raises the same concerns we had over a year ago.

We involved Don Guild as the Big White  ER warden to help the FER board decide what to do in response to the Big White Master Plan.  As a result of that dialogue FER Board over my signature wrote a letter to government and we got a response saying no application had been made. Until that is done there is no issue for government staff to deal with. Rather than lean on the government and Parks I think a more effective strategy maybe to put pressure on Big White to amend their Master Plan and to stop showing investors they want or are able to develop the ER.

We do not want FER to raise concerns or ask for public support as Randy is suggesting and more letters to government which will get the same response we got UNLESS the status of the development has changed.
The video link below needs a caveat to write to Big White or the news paper .

Feb 24 2010
To:   The Honourable Barry Penner Minister of the Environment
The Honourable Kevin Krueger Minister of Tourism, Culture and the Arts
Re: Big White Ski Resort Master Plan proposal to expand into Big White Ecological Reserve
The Friends of Ecological Reserves (FER) is a non-profit organization that supports the Ecological Reserve (ER) system and the Ecological Reserve volunteer wardens program. The volunteer wardens assist government staff to safeguard the natural heritage and ecological integrity of British Columbia’s ERs.
The FER Board members are extremely concerned about what we understand is a proposed expansion of the Big White Ski Resort that would include facilities within the boundary of the Big White Ecological Reserve (ER). ERs are provincially protected areas which, as noted on the BC Parks/Ecological Reserve website1 “are not created for outdoor recreation and should not be confused with parks or other recreational areas”. As well, ERs are places with special features and attributes; with few exceptions other lands cannot be substituted nor ER boundaries reduced or shifted without serious damage to the values for which these protected areas were set aside. It is disturbing that the Big White Ski Resort hasn’t acknowledged the existence of the Big White ER in any of its plans, even though it is immediately adjacent to their operations. None of their maps show the ER and there is no reference to it in any text, yet it is a provincially significant benchmark area.
We appreciate clarification on a number of questions critical to this matter. The Ministry of Tourism, Culture and the Arts provides guidance on resort development and lists a number of resorts with approved plans on their web site2; however, neither the status of the Big White Master Plan nor a possible public review process is present on this site. Has the Master Plan been approved and not yet posted or is it under review? We are pleased that the government’s strategic plan includes a pledge to “to make decisions in a manner that is consistent, professional, fair, transparent and balanced.”3. We are not clear on whether a decision has been made and whether government has approved the ski
resort plans to expand into the Big White ER. We are also not clear on public review process, timelines and opportunity for public input to land use decisions and ER?
We understand that Big White Ski Resort has expressed interest in exchanging land on the eastern side of their area for Ecological Reserve land on the west side adjacent to the resort’s Gem Lake lift terminal. We would appreciate knowing if the Resort owners have approached the government about a possible land exchange or boundary change in order for them to expand into the present ER as shown on their 2009 Master Plan. According to the Ecological Reserves Act changes would necessitate a legislated amendment and any exchange of land would require the conservation values of the Ecological Reserve land be matched or improved by the land offered for trade. As well, the overall effect of such an exchange on the values for which the Ecological Reserve was created would have to be evaluated.
Below are the details on the Big White ER’s reason for being.

Big White Ecological Reserve (BWER)
The Big White ER was established in 1972 and is 951 ha in size. The Primary Role for this ER, as stated in the Management Plan is “is to protect a small example of the Engelmann spruce-Subalpine Fir and Alpine Tundra zones in the southern interior. The Ecological Reserve protects old growth stands of Engelmann spruce and sub-alpine fir and high elevation wetlands. It is also representative of the only true alpine in the Northern Okanagan Highland Ecosection with large areas of krummholz. Known rare species include Engelmann’s sedge (Carex engelmannii), Elmer’s Indian paintbrush (Castilleja elmeri), alpine Indian paintbrush (C. rhexifolia) and alpine-wintergreen (Gaultheria humifusa).”. Aside from the protected status of the ER, this fragile alpine ecosystem would take centuries to recover from any disturbance. We have included pictures from the ER to show the general ecology in question.
FER also has serious concerns about the adequacy of current inventory and monitoring of flora and fauna within the ER, information which would be crucial to any discussion about a land exchange. The adequacy of inventory in the ER needs to be established and a suitability detailed baseline determined. FER would be most willing to assist Ministry of Environment staff and the Big White ER warden in this critical work.
We are not aware of any equivalent alpine and subalpine on Big White outside of the ER which could scientifically be judged as of equal and equivalent ecological value and therefore worthy of being considered for a land exchange.
2
The Proposal
The Big White Ski Resort Master Plan 2009 (4)  states that it is the “basis for detailed design, engineering and implementation planning which will see Big White effectively double in size.”. One aspect of this proposed expansion would see ski runs through the Big White Ecological Reserve. This is shown clearly on the map below, on which the ER boundaries were drawn for purposes of this letter when it was noticed that the Master Plan expansion included lands in the ER. We are not absolutely certain that the ER boundary has been accurately transferred onto the Master Plan so there may be some slight differences; however as shown, three new ski lifts and numerous trails would be within the ER boundary.
As mentioned earlier, Big White Resort knows the location of the ER and we believe are contemplating requesting a land exchange to allow the expansions as shown. The Big White Ski Resort is very aware of the ER and has been cooperative with the ER wardens over the years. To date, their operations have had minimal impact on the ER, so they have been considered to be a good neighbour. 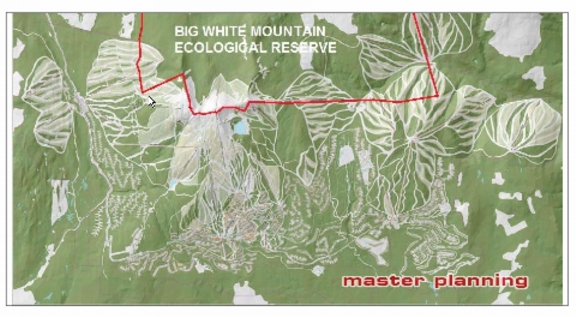 2. Not all approved Resort Master Plans are available in electronic form at this time. http://www.tca.gov.bc.ca/resort_development/resort_plans/approved_resort_plans.htm
3. Province of British Columbia STRATEGIC PLAN 2009/10 – 2011/12. http://www.bcbudget.gov.bc.ca/2009/crown_toc.htm

Thank you for your letter of February 24,2010, also addressed to the Honourable Kevin Krueger, Minister of Tourism, Culture and the Arts, regarding the possible expansion of the Big White Ski Resort into the Big White Mountain Ecological Reserve. I am pleased to respond to your inquiries that are within the purview of the Parks and Protected Areas Division of the Ministry of Environment.
To date, the Ministry of Environment has not been formally notified about any proposed expansion of the Big White Ski Resort. Recently, regional planning staff have spoken to staff within the Resort Development Branch (Tourism Division) of the Ministry of Tourism, Culture and the Arts (MTCA). They confirm that the master plan project for Big White Ski Resorts Ltd. is conceptual at this stage, and that no formal application for increased land tenure has been initiated by the resort owners or received by MTCA. The Resort Development Branch of MTCA is fully aware of the protected area status of land (that is, the Big White Mountain Ecological Reserve) in proximity to the existing Crown land tenures that the resort holds.
Ministry of Environment regional planning staff will remain in communication with MTCA’s Resort Development Branch to ensure there is continued discussion about any proposed expansion of the existing Big White Ski Resort.
If you have any further questions on this issue, please feel free to contact Mr. Keith Baric, Regional Planning Section Head for the Okanagan Region, Ministry of Environment, at 250 490-8260 or at Keith.Baric@gov.bc.ca.
Thank you for your continued interest and efforts in maintaining and protecting the values contained within our ecological reserves and other protected lands in British Columbia.

So in light of the government’s reply, we would like to see a different approach used than that suggested below. It would be much more productive to communicate with the Big White Resort and insist that they remove the overlapping extension shown on their development  plans that go into the ecological reserve.

Write letters to the newspapers if  Big White response is not satisfactory.

Would you be so kind as to pass on this information to your members who might be interested? As well, would you know of anyone who might have photos or video clips of ecologically significant features in the Big White Mountain Eco Reserve? I am hoping to possibly add more clips and photos to the video, as I was only able to hike in to the reserve for one day.

I have already noted one technical error on the video (BWMER was established in 1972, not 1970). As well, the photos of plant species may not match the narration. Any suggestions are appreciated. I am hopeful that some of your members might have photos of specific flora and fauna  (I.e. photos of wetlands, unique species, etc.) found in the reserve that could be added.

I don’t believe that the proposed Big White Resort Master Plan has been approved, so it is not too late to mount opposition to Schumann Resorts’ plans. I believe the reserve was established by Order in Council, which may also mean that its boundaries can be altered  by same, without debate in the legislature. I’m not sure.

I do appreciate the letter or concern which the Friends submitted to MTCA (now MNOR) last year. Thank you. I do believe however, that there needs to be more public awareness of this issue.