The primary role of the Kotcho Lake Ecological Reserve is to protect Colonial
Waterbird nesting sites and their migration stop over. This reserve includes two flat
islands (partly boggy) and an area around the mouth of Kotcho River. Kotcho Lake is a
large, very shallow lake located within the Etsho Plateau ecosection, a region of
extensive muskeg, lowlands and rolling plateau dominated by Boreal White and Black
Spruce.
The Lake is a site of traditional First Nation settlement, and contains a significant fishery
and significant cultural and archaeological values. 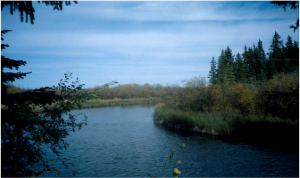 Conservation
Representation  – ecosection:  Kotcho Lake Ecological Reserve is located  within the Etsho Plateau Ecosection. Only  0.01% of this ecosection is represented in  the protected areas system. This ER  contributes almost half (48%) of that  representation.

Relationship to other PAs The ecological reserve is located adjacent  to the Kotcho Lake Village Site Provincial  Park.
Collaborative Management Arrangements This ecological reserve will, once the agreement is signed, be subject to the  Memorandum of Agreement respecting the management of provincial parks between  the Government of BC and the Treaty 8 First Nations.