FROM: THE LOG FRIENDS OF ECOLOGICAL RESERVES NEWSLETTER SPRING/SUMMER 2016 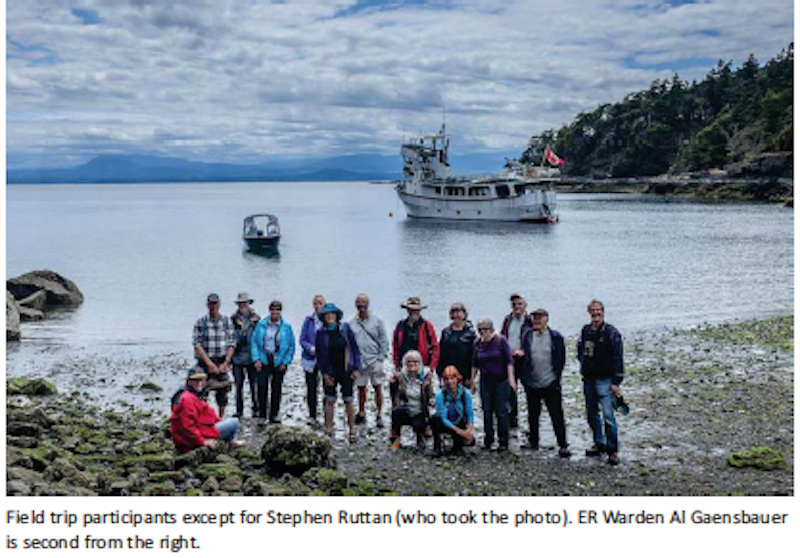 Board members and friends took a field trip to the Lasqueti Island Ecological Reserve # 4. Lasqueti

Island is a small island located North of Parksville in the Strait of Georgia, between Vancouver Island and the British Columbia mainland, and  adjacent to Texada Island Lasqueti Island is approximately 8 km wide and 22 km long, with an area of 73.56 km . About 425 2 permanent residents call Lasqueti home (2011 census). It is accessible by foot passenger ferry service only, or by private boat or plane.

The roads are unpaved and the island has no public transportation. There are no public camp grounds. Lasqueti is not serviced by B.C. Hydro. Residents live either without electricity or with alternative sources of power like solar or micro-hydro. There is very little industry and no bustling economy.

The reserve was established in 1971 and is 201 ha in size and from sea level to 240 meters in elevation  Oddly, despite generally being in an area of temperate rain forest, it is very dry and has prickly-pear cactus as a result of being in a “rain shadow” caused by both the Washington State Olympic Mountains and the Vancouver Island central mountain range depleting much of themoisture.

Many of us travelled by car pool from the Victoria area that morning and we all met at a marina by the Departure Bay ferry terminal in Nanaimo for a planned departure at 8:00am aboard the Bastion City, a 60 foot twin-engine boat skippered byDave, with Evelyn as first mate (a biologist). Also along for the trip

were: Fred and Louise Beinhauer, Mike Fenger and Val Hignett, Rick Page and Joan, Garry and Helen Fletcher, Michael and Jean Brinsmead, Marilyn and Phil Lambert, Liz Williams, and Stephen Ruttan . A total of 16 of us which the vessel was able to accommodate quite nicely.

We made breakfast aboard ship on the way from Nanaimo to Lasqueti, a voyage of some five hours motoring at around 5 knots. We arrived about 1:00pm and motored behind Jenkins Island (yes, yet another island) where we saw quite a few pigeon guillemots in the water along the shore. Garry noted that the cavities in the fractured rock face along the shore were used for nesting.

We dropped anchor in a little bay just off the western edge of the ER. We took a tender to shore and met Alfred Gaensbauer (Alf or Al), an 87-year old long-time resident and the warden of the ER. After Garry commented on the pigeon guillemots that we saw, Al noted that 2,000 of the birds use the ER’s rocky boulder shoreline for their nesting sites. He says they are always here this time of year.

Al owns many acres which he lives on adjacent to the ER; hence he is ideally located to monitor what happens in the ER, and was able to provide us with a vast wealth of stories, information and history while he guided us through the ER. Al was more agile and fit than most his visitors and every bit as quick minded! 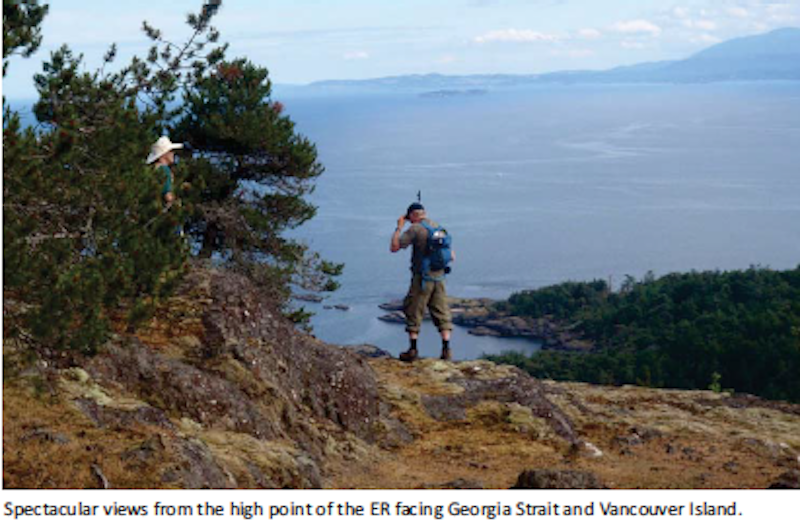 Our first tour started from the west side of the ER at sea level, along the foreshore and up towards the back of it climbing to a high point, with spectacular views of the Strait and Vancouver Island.

We saw some of the notable species for this ER such as seaside junipers, shore pine, and very dry, crackling reindeer lichen underfoot on the rocky slopes. Much of the under story was very open due to the heavy grazing of feral sheep and deer. We saw a garter snake on the upper swales which was on the list of reptiles in the ER.

The reserve contains a rocky, irregular hill with slope exposure to the south and east, the steepest slopes, including cliffs to 30 m in height, being near the shoreline.

About two kilometres of shoreline is included. Large areas of bare volcanic bedrock are exposed on hill tops, steep slopes and along the shoreline. Significant soil formation is limited to a few narrow draws and small valleys, and to less rugged terrain near the north boundary.As a result of southerly exposure, location at sea level and thin soils, the vegetation here is representative of the very driest habitats within the Coastal Douglas-fir forest. Most of the reserve is covered with open stands of Douglas fir, arbutus and shore (lodgepole) pine, interspersed with mossy, grassy or bare rock openings. Western redcedar, western hemlock and red alder occur in a few moist draws, and wetland plants in three small swamps. Seaside juniper including specimens of record size  is common near the shoreline, in association with other dry-site plants like prickly-pear cactus, Puget Sound gumweed, and introduced species such as early hairgrass and soft brome.

We took many photos that first day and we ended the day with a visit to Alf ’s home which we walked to from the ER. Al has a fence surrounding much of his property as he grows many fruit trees and vegetables. The difference in vegetation outside and inside his fence was very noticeable. Outside, the vegetation at ground level was quite sparse while inside the fence it was very lush – largely due to th feral sheep and deer outside the fenced area. As well, some watering goes on inside the fence too!

We went back to the ship for the evening, raised anchor and moved up island to False Bay and dropped anchor there for the night. We made dinner onboard and for sleeping arrangements, having some three decks, some of us slept in the cabins below, some on the large sofas in the lounge area, some in tents on the upper deck, and one  in the upper wheel house. It was a beautiful night with many stars visible in the clear sky.

In the morning we made breakfast and raised anchor to move back to the same bay behind Jenkins Island and again met up with Alf. However, this time we took the launch to the east side of the ER where the prickly-pear cactus are more viewable along the cliffs of the foreshore and also to walk the smallportion of the ER that was fenced to protect it from feral sheep. The cactus patch was in full bloom so our timing was excellent.

The ER has a very long history of grazing primarily from feral sheep and goats. Al says the goats have notbeen seen in the last few years but the sheep remain. We did not see any, but the sheep were very much evident from droppings, bleached bones and a skull, and wool hanging from branches and on the wire mesh of the non-functional fence that was to enclose about 20 per cent of this ER from constan therbivory. Deer also browse withinthe ER but there was little evidence of their presence and we conclude that they are a minor influence in comparison to feral sheep.Lasqueti Cont’d. from page 10

The prolonged grazing by sheep has resulted in seedlings that do not germinate and establish so the stand structure is very much older trees in the over story with no pole sapling layer.

This ER has ground lichens that are in excellent condition. Seems the sheep only make trails through it and leave it to develop into dense continuous deep mats. We attributedthis pristine condition due to isolation and lack of human trampling.

We stayed on the animal paths too. The fence in this ER was installed in the 1990s. It is a half circle with one end at the shoreline at the east edge of the ER and the other end at the shoreline at the middle of the ER. In all, there is about 1 km of fenced shoreline and 1.5km total of fence line. Unfortunately there was no difference inside and outside the fence. The fence had a number of breaches, many having sheep wool stuck to them which obviously let the sheep roam into the protected area. It was noted that most of the fence is in good condition and only a small bit of repair would be needed to fix it. Some portions have fallen trees that collapsed the fence. The eastern edge is rusted and breached in places for about 200 meters from salt spray. Also it was noted that on the eastern edge it appeared that people coming ashore purposely breached the fence, perhaps for walks. It was suggested that a gate and a sign be placed there saying in effect “Please keep this gate closed to keep the sheep out. Thanks”! 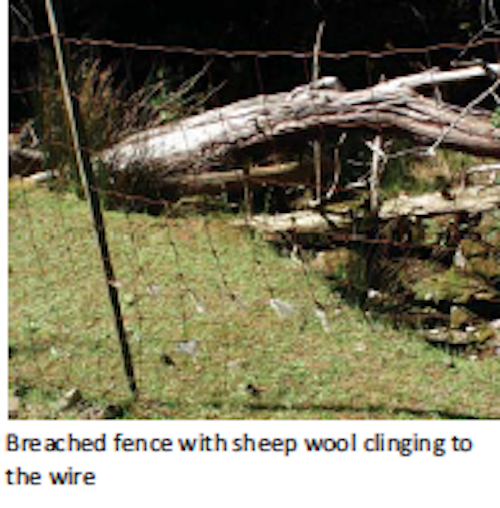 Our conclusion after assessment of the fence and the ecosystems is that the fence was put up to allow a portion of the ER to develop with reduced grazing pressure from feral herbivores. The fence was a good idea and well implemented but is now in disrepair. Al was keeping the windfall off the fence for some time u n t i l instructed to stop by BC Parks staff. We think this may have been out of concern for liability issues. We think this liability issue has been resolved but the change in policy has not been communicated to thiswarden. Al says he is done with that kind of power saw work but would help if asked to by Parks. In a letter to Al, Parks staff indicated that they would take care of fence maintenance but there has been no follow through on this. 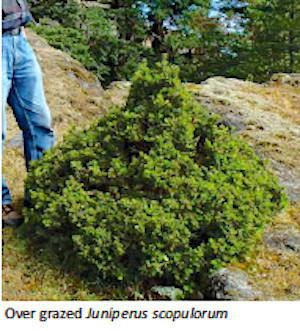 On the return trip to Nanaimo, a small group compared their field notes and plant samples with the species on the published lists of plants and animals. An alligator lizard which was spotted on our hike, was not on the original list published in the 70s. A great deal of new information was found and we are fairly certain there are new plant species for the ER to be added to the list.

It was a really fun and informative trip to Lasqueti Island. Thanks again to Al, the warden, and the crew of the Bastion City: David Littlejohn and Evelyn Hamilton!!