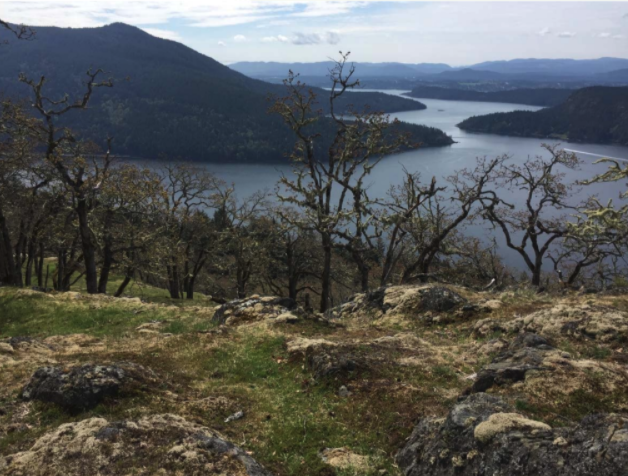 Acknowledgements: This report and the data analysis that supports it were prepared by Jenny Feick with assistance from Marilyn Lambert, Ian Hatter, and Louise Beinhauer, and research and data input from Mike Fenger, Garry Fletcher, Stephen Ruttan and Rick Page.

Photo on Front Cover: A view of part of the extensive Garry oak ecosystem in the Mount Maxwell Ecological
Table of Contents

3.0 Establishment Date and Location of Existing ERs in B.C. 3

4.1 ERs with No Management Planning Direction. 5

On May 4, 1971, the Government of British Columbia became the first jurisdiction in Canada to pass legislation to protect ecological reserves. May 2021 marks the 50th anniversary of the Ecological Reserves Act and regulations and the establishment of B.C.’s first ecological reserves. No new reserves have been established since 2009 and the 2005 assessment of the condition of existing reserves raised “concerns that the ecological values of many individual reserves are at significant risk and a more proactive approach to managing the reserves is required to reverse this trend.” (FER, 2006)

Despite FER’s periodic communications with BC government agencies about worthy candidates, no new ecological reserves have been added as of 2020 and from the reports of volunteer wardens, the state of existing reserves continues to deteriorate. At their November 2019 meeting, the Board of the Friends of Ecological Reserves (FER) decided to make a renewed and concerted effort to encourage BC government officials to establish several new ecological reserves and to address management, conservation and stewardship issues in existing ecological reserves in time for the 50th anniversary of the Ecological Reserves Act. FER developed this report (and the spreadsheet containing the data used to inform it) to provide background information for a meeting on June 3, 2020 with BC Parks focused on improving the management, conservation and stewardship of existing ecological reserves.

Six Board members researched specific information on the BC Parks and FER websites to inform development of an Excel spreadsheet[1]. Information sought included the presence of approved management planning direction documents, the dates of each, and management issues identified in them; the existence, dates and topics of scientific research papers and monitoring reports on the FER website; the existence of ER warden reports on the FER website, which ERs currently have wardens, and whether FER has contact information for them. Ecological reserve wardens described current issues in emails, phone calls or in person[2]. FER members Louise and Fred Beinhauer provided additional information, as did Dian Moran, a member of the public. Ian Hatter led the quality control and analysis of the spreadsheet data. Jenny Feick wrote the report based on the data analysis.

&nbsp;
3.0 Establishment Date and Location of Existing ERs in B.C.

Nearly one-third of the ERs have been established in the West Coast administrative region of the BC government. The Skeena Region has seventeen percent of the ERs. The South Coast has 11%. The Omineca and Thompson-Okanagan each have ten percent, and the Kootenay-Boundary and Northeast regions each have seven percent. The Cariboo Region has six percent of the ERs in B.C. Small in size, the 148 ERs still under provincial juris-diction comprise 0.008% of the BC Parks Protected Area System (Fenger and Feick 2020).

Table 2: Distribution of Ecological Reserves in BC Government

Administrative Regions  &nbsp;4.0 ER Management Planning Direction Gap Analysis (n=154)&nbsp;4.1 ERs with No Management Planning DirectionOut of 154 ERs, 22 (14%) have no management planning direction listed on the BC Parks website. Of these, six ERs have been transferred to other jurisdictions, five to Parks Canada (three to Gwaii Hannas and two to Gulf Islands national park reserves) and one to Metro Vancouver Regional Parks. Fourteen (9%) of these ERs have an old overview statement on the FER website.

5.1 Monitoring Reports Out of 154 ERs, 52 (34%) have some type of monitoring report listed on the FER website. Sixty-six percent of the ERs (102/154) have no monitoring reports listed on the FER website. The date range for the most recent monitoring report for a particular ER is 1972-2020 (with 1 from 1969). The median date is 2000. The average is 1996. The most common topics of these most recent monitoring reports are the results of surveys of: vertebrate fauna, especially birds, vegetation (vascular, non-vascular plant species), management issues/state of the ER, ecology/general natural history, invasive plants, hydrology, invertebrates, marine environment and wildfire impact.

Table 3: Distribution of ER Wardens by BC Government Administrative

7.1 Management/Conservation/Stewardship Issues in Management Planning DocumentsIn most cases, management planning documents listed on the BC Parks website contain a section that identifies management issues for the ecological reserve. In some cases, the ER is included with an adjacent protected area with no issues identified for the ER. FER Board members reviewed the list of issues and identified the top five.

ER #1-25  Garry Fletcher reviewed all of the management issues listed in the management planning documents for ERs #1-25. The top issues mentioned were

ER #51-75 Jenny Feick reviewed the management documents and analyzed and coded the text on issues for ERs #51-75. The top five most frequently mentioned issues are as follows:

ER #76-100 Stephen Ruttan reviewed all of the management issues listed in the management planning documents for ERs #76-100. He reported the following observations.

ER #126-154 Marilyn Lambert reviewed all of the management issues listed in the management planning documents for ERs #76-100. The top five issues mentioned are:

From time to time, ER wardens contact FER to highlight important issues they face in the management, conservation and stewardship of the ecological reserve(s) they voluntarily care for. FER informed wardens with known contact information about the upcoming meeting with BC Parks and asked if they could identify their top 3-5 issues.
The issues most mentioned in the communications (email, phone call, in person) received by FER between December 2019 and May 2020 include:

Other issues mentioned once include: Climate change effect on rare plants; the need for updated monitoring (e.g. an updated review of rubbing beach use by orcas)
7.3 Prioritized List of Management, Conservation and Stewardship Issues

FER recommends that priority be given to addressing the following issues in existing ERs: