Walking distance – 13 kilometres, with loops around upper and lower islands

The water level was very low. After crossing the first main channel with strong current, and a stretch of gentle current, we landed on the gravel bar of the ER upper island, but a long distance offshore from where we usually land. It seemed like we walked about a third of the distance that we usually paddled.

On landing, similar to last year (April 10) we had views of a pair of Bald Eagles, one sitting in the nest in the large cottonwood stand, and its partner perched in a cottonwood a short distance away. This nest has been used consistently for as long as we have been wardens.

Due to the cold winter and spring, the cottonwoods and willows and most all the vegetation is ‘grey’ coloured. There was only a slight hint of green new growth from some of the shrubs – the Indian Plum and Snowberry Bush about to leaf out, but the gentle power of the new-green flush of new growth had not yet emerged. Dramatic was the extent of large branches than had broken off from the large Cottonwood trees and along the shoreline and inner swales were many snapped off willows and cottonwood. This was likely caused by the weight of the winter snows and for the trees lining the shoreline and edges of the swales, their branches were extending outwards and one-sided, so the weight of the snow toppled those trees.

During our paddle to the islands and for about the next half hour, there were two helicopters flying from the area downriver of Chilliwack Mountain and flying low around the Ecological Reserve, almost as if this was a training exercise. One helicopter came down on the upper island to within about 15 feet above the ground, but did not touch ground. One helicopter flew fairly low over the eagle nest, but the eagle did not fly away. We thought there was a height restriction for helicopter flights? One helicopter later sounded as if it had landed for a short time on one of the farm fields on Nicomen Island. The helicopters were small sized.

We walked towards the sand dune, which with lower water level rose high above the river. Heather found a large freshwater mussel shell, intact, which we think is similar species to what we found On Dec 7, 2014. Interesting the water level that December was similar to water level on today’s trip. We later found two other intact shells (smaller), plus a couple of broken shells. The 2014 specimen was identified as: western-river pearl mussel, Margaritifera falcate

Then we found a large egg, emptied through a small hole, possibly by a raven. Egg ID? Unknown, but possibly a farm goose egg or Canada goose egg.

We continued walking on the very extensive gravel bar extending from the high sand dune to the upstream tip. Much of this area was now sand, with interesting patterns left by the wind. Some

areas where young saplings were growing had the sand eroded away so that their bare roots were exposed.

We saw what appeared to be quad tracks, and an area near the main river channel where shot gun firing had occurred, possibly target practice, as there were about 50 empty shells in one location. Label on shells (blue) is “Challenger 12 Canada”, which from the internet looks like lead shot.

At the upstream tip, there were no Black-bellied Plovers loafing in the gravel at the edge of the river. We are about two weeks earlier than the previous three years when we had observed the loafing Black-bellied Plovers in this area. Similarly there were not the large numbers of Glaucous-winged Gulls seen here in previous years in the second week of April. There were however more than one hundred Violet-Green Swallows gliding over the gravel bars and over the flowing river, dipping close to the water to pick-up insects and also soaring above us.

We continued downriver along the southern side of the upper island, where erosion of its shore bank continues. We saw a garter snake, fairly active considering the temperature. Next we followed the broad inner swale, entirely dry now, and as we approached the more central cross swale area, much of the previous gravelled area was covered with clay/silt soil topped with moss.

We followed the wide gravel/sand/dirt channel back out to the southern main channel, noting more ATV tracks along the way. Near the southern main river channel, we found an area of ‘clay-pigeon’ target practice, also a structure lashed together with logs as a sort of a shelter. We removed the lashings and garbage from this site. The water level was so low we were able to follow the shore of the next small island downriver along the main channel, to the large inner deep water-filled channel that crosses the islands at a horizontal angle to the main river current. There were six Mallards here, fewer than seen before.

Violet Green Swallows were also feeding in this area, some swooping over the gravel bar right beside us.

The beaver lodge built on the bank of this main cross channel (still with lots of quiet water) looked well used, plus lots of tracks into the woods and cut willows and cottonwoods. We heard a lone Pacific Chorus Frog (Tree Frog).

There was a fire pit on a bank of this interior water course. We had not seen fire pits in this area before, as the people fishing usually are positioned along the main channels. We figured this fire pit was likely hunters. There were also several quad tracks in the interior gravel channels.

We walked past the eagle nest (at quite a distance) and were able to wade across the water flowing gently from the inner cross channel, near its downstream end. Looking further downriver we could see hundreds of ducks, most loafing/sleeping on the shoreline of the accreting island adjacent to the ER, some on the ER island itself, and the rest of the ducks were floating on the quiet channel (almost no current) between the lower ER island and the accreting island. Approaching closer, we focussed the spotting scope on them and counted close to 2000 ducks. We estimated about ¾ of the ducks were Mallards and ¼ American Widgeon.

We made our way across the larger of the lower islands, along the old inner swale (now vegetated). Likely as a result of the heavy winter snow, we had to step over or around many broken branches and fallen trees. The inner shallow pond still had water, despite the low water of the Fraser River itself, possibly due to the heavy rains of previous days and weeks. This pond had about 30 large egg masses, which we identified as Northwestern Salamander, similar to what we had seen in this pond in spring 2014.

We then walked along the wide inner swale, largely gravel surfaced and sand, between the two large lower islands. At the downstream end of this swale, the large pond has a new beaver lodge built into its bank. We observed a dead fish in this pond (see photo) a non-native Pumpkinseed, or common sunfish. We later learned that Pumpkinseed fish have now invaded the lower Fraser River.

At the downstream tip, we were able to observe the ducks again, now closer. There were at least one Pintail and one Ring-necked Duck amongst the 2000 or so ducks. They are hard to count as many are loafing tight together right on the shoreline of the accreting island just across the quiet inner channel. This island is proposed to be included in an expanded protection zone boundary.

The lower tip of the ER islands appears to be extending/accreting further downstream, while the side of the island facing the southern main channel (looking towards Chilliwack Mtn) continues to erode.

We continued back up the side of the island (northern) facing towards the ducks. Along the way, near the older beaver lodge, there was a beaver floating in the river watching and smelling us. It would slap its tail, then dive, come up and watch us again. Then repeat with another slap of its tail. Further upriver we saw a second beaver that then swam downriver to the first beaver. The beaver antics continued for more than half an hour.

We came across the remains of a deer, with lots of fur and bear scat in one area. Nearby was the deer’s partial skeleton including cleaned ribs, backbone and head, but no legs.

It was dusk by the time we reached the shore of Nicomen Island and the take-out.

Mallard 1500 loafing in mass, + 20 in small groups spread around the islands

American Wigeon 500 loafing in mass, + 16 in two small groups in other areas of the islands

(includes pair of adults at nest with one adult always on the nest, 6 other adults, 4 immature eagles. Other than the 2 adults at the nest, most eagles were soaring overhead, although at least 2 were perched in tall cottonwoods on the islands and 2 perched on beached logs on upriver gravel bars)

flying over gravel bars and over river, swooping down feeding on the river, plus some circling high above

Deer – perhaps not as extensive tracks and scat as previous years; one area along sand bar with a dead deer, remains of fur and lots of bear scat

Coyote – lots of scat and tracks, plus saw a coyote watching us in early evening; it howled and was responded to from coyotes in two other locations on mainland. In a few locations saw diggings in sand of new accreting areas, possibly digging for roots, or beetle larvae.

Garter snake on upper island, plus one dead on lower island swale – its tail broken near the tip

Pumpkinseed or Common Sunfish – an invasive, this fish was dead and in large interior pond between two lower islands 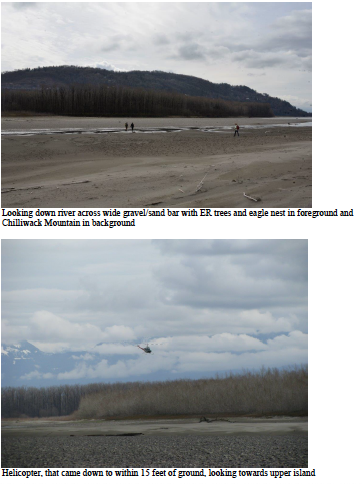 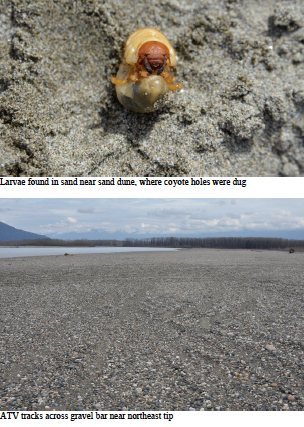 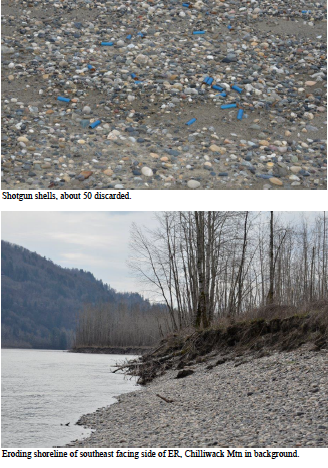 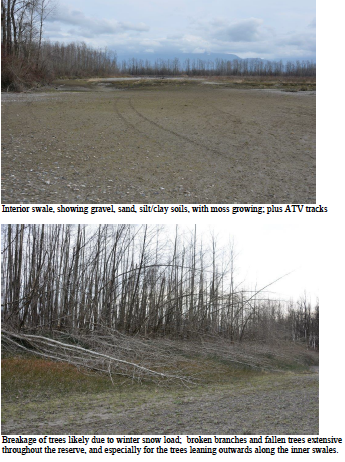 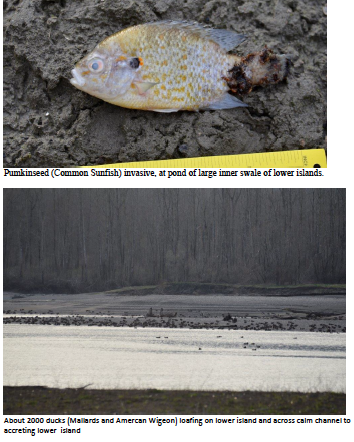 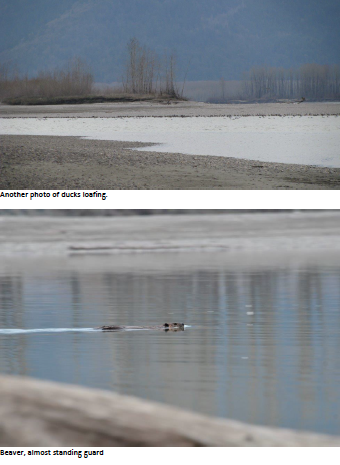