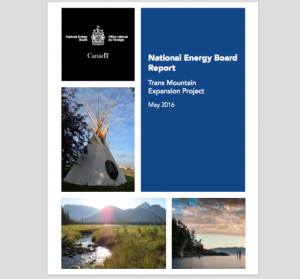 Our efforts as Intervenors for the Board of Friends of Ecological Reserves and similar concerns of many other intevenors to deal with the risk to the marine environment and the 19 Marine Ecological Reserves have not been considered to be important in this process.  Our recommendations for a thorough environmental assessment of the marine areas impacted by transport of the highly toxic diluted bitumen  and the contribution of this project to the cumulative effects of Chronic Pollution which will be the result of the project have been dealt with in one brief statement quoted below:

The following section explains very clearly their rational for not following up on one of the issues they had been tasked to deal with, as they have simply abrogated their responsibility and passed it back to the Federal Regulatory Agencies.

“1.2.4 Issues outside of the Board’s regulatory oversight
The Board is an administrative tribunal created by Parliament under the NEB Act. The NEB Act lays out in detail what must be considered, and the extent of the Board’s authority is set out in its governing legislation, including the NEB Act and the CEAA, 2012.

When the Board established the List of Issues to be considered in this hearing, it included Issue 5:
The potential environmental and socio-economic effects of marine shipping activities that would result from the proposed Project, including the potential effects of accidents or malfunctions that may occur.

The Board stated that this would be considered under the NEB Act.5 On 10 September 2013, the Board issued specific filing requirements related to the environmental and socio-economic effects assessment of increased marine shipping that Trans Mountain should consider in its application to the Board. The Board’s regulatory oversight of the Project, as well as the scope of its assessment of the Project under the CEAA 2012, reaches from Edmonton to Burnaby, up to and including the WMT. Marine vessel traffic is regulated by government agencies, such as Transport Canada, Port Metro Vancouver, Pacifc Pilotage Authority and the Canadian Coast Guard, under a broad and detailed regulatory framework. All of these agencies participated in the Board’s hearing process. As the Board does not have regulatory oversight of marine vessel traffic, any changes to the existing regime would be the responsibility of those competent authorities. However, the Board did consider the potential environmental and socio-economic effects of Project-related tanker traffic, including the potential ffects of accidents or malfunctions that may occur in coming to its public interest determination under the NEB Act.”

And this is what it had to say about our concerns for the Southern Resident Killer Whales: A Species at Risk:

The Board is mindful that Project-related marine vessels would follow an established shipping route that currently has high volumes of vessel traffic and that, even if the Project does not proceed, the intensity of commercial and recreational traffic along the shipping route is predicted to increase in the future. The Board is encouraged by current initiatives being undertaken by Trans Mountain, Fisheries and Oceans Canada, and other organizations to support the recovery of the Southern resident killer whales.

The Board also took into consideration the likelihood and potential consequence of a spill from the Project or from a Project-related tanker. The Board found that while the consequences of large spills could be high, the likelihood of such events occurring would be very low given the extent of the mitigation and safety measures that would be implemented.”

Some of the concerns The Board of Friends of Ecological Reserves were mentioned  in the report.

from page 390
Baseline data
Numerous participants raised concerns about the sufficiency of marine resources baseline data. The Board of the Friends of Ecological Reserves and the City of Port Moody raised concerns over the adequacy of baseline data of marine resources (i.e., fish, vegetation, etc.) within Burrard Inlet and along the shipping lanes. They emphasized that such baseline data is crucial in considering what might be lost if there is a spill, determining effects after a spill, and in crafting criteria for monitoring during post-spill restoration efforts. In response, Trans Mountain said that it conducted the marine transportation effects assessment based on up-to-date research, does not believe that additional data collection would affect the conclusions presented in the Application, and that vessel traffic associated with the Project would represent a relatively small proportion of total vessel traffic along the marine shipping lanes.

from page 394
A number of participants noted the potential for terrestrial vegetation close to shorelines to be effected  by a marine spill. The Board of the Friends of Ecological Reserves, for example, said there are numerous rare plants and lichens in the spray zone of terrestrial ecological reserves along the marine shipping lanes that would be susceptible when storms are blowing sea spray laden with toxic oil, and that this would very likely lead to local extirpations. Trans Mountain said that 43 SARA-listed plant and lichen species, and their critical habitat, have the potential to occur in the supratidal zone; and that high wind and wave conditions leading to the formation of sea spay could result in oiling and death of vascular plants, mosses or lichens. Trans Mountain said with regard to SARA-listed terrestrial plant and lichen species in the supratidal  zone that could be affected by oiled sea spray, that although the recovery potential of such communities following oiling is unknown, in consideration of their SARA status and the documented sensitivity of some lichen species to air pollution, it must be assumed that the prognosis for recovery would be poor.