What Lies Below at Baeria Rocks Ecological Reserve

In 2016 The Friends of Ecological Reserves provided funding to the Diving Class at Bamfield Marine Station to do an underwater survey in the Ecological reserve to document for baseline Data purposes the species of the Underwater and Terrestrial portion of the reserve. The report by Isabelle Côté and Siobhan Gray is documented in the Autumn /Winter issue of the Log 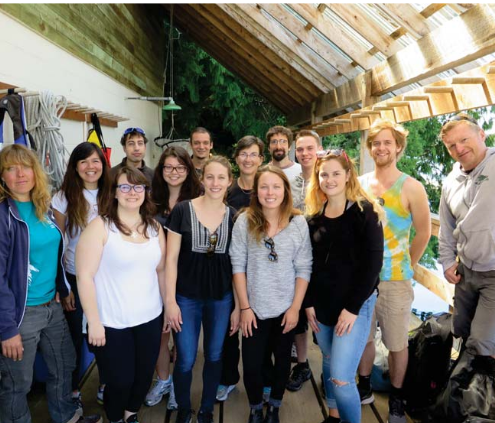 What Lies Below at BaeriaRocks Ecological Reserve?

By Isabelle Côté and Siobhan Gray

With funding from the Friends of Ecological Reserves, the instructors of the Bamfield Marine Science Centre (BMSC)Scientific Diving class mounted an expedition to survey the waters around Baeria Rocks Ecological Reserve. The reserve consists of small rocky islets in the middle of Imperial Eagle Channel, in Barkley Sound. It is a remote and beautiful place, accessible only by boat.On 19 May 2016, 15 divers (including the whole of the Scientific Diving class) were ready to plunge in. The excitement was palpable.This was the capstone exercise of a physically and academically gruelling course. All divers were well trained in survey techniques and identification One diver was assigned to videography. Surveys were.conducted by six dive teams. Three teams conducted roving timed surveys and three teams conducted transects. As in previous years, the teams were deployed around the north islets for the first dive and around the south islet for the second dive, alternating roving and transect teams long the shore.Each roving team carried out a 30 to 50 minute roving survey, from a maximum depth of 50 feet (14 metres), where possible, to the top of the reef, swimming in a semi-systmatic zigzag pattern from deep to shallow water. Both divers counted every individual observed of each species listed on an underwater roving survey sheet. When a species was very abundant (i.e., more than 100 individuals), surveyors recorded numbers as ‘lots’. Divers noted the duration of each roving survey, as well as the depth range surveyed.The maximum number of each species recorded between the two divers in each buddy pair was retained, and maximum numbers were averaged across roving teams for each islet. This method generates an index of abundance for each species expressed in number of individuals per 30 minutes.

CONTINUED with photos at