Pink Mountain – A Strong Case for a New Ecological Reserve

FROM: THE LOG– FRIENDS  OF ECOLOGICAL RESERVES NEWSLETTER SPRING/SUMMER 2016

As one of the FER board

members present at the Victoria Natural History Society’s Botany Night held at Swan Lake Nature Centre on February 16th, I could not have been more stirred by a talk given by Ron Long, long-time advocate for a new Ecological Reserve in northern BC.

Pink Mountain, named locally for its pink glow at sunrise (and Ron rose very early to see for himself) is 112 miles north of Fort St. John and 27 miles west of the Alaska Highway. A 2.2 square kilometre section of Pink Mountain awaits a future of long-term protection or certain demise as one of B.C.’s most significant and interesting wild places. This extreme tundra habitat has a high, possibly the highest, biodiversity in B.C. in spite of having one of the harshest environments. Although the two nearest ERs, Ospica Cones and Sikanni Chief have similar habitats, there is almost no overlap of plant species. 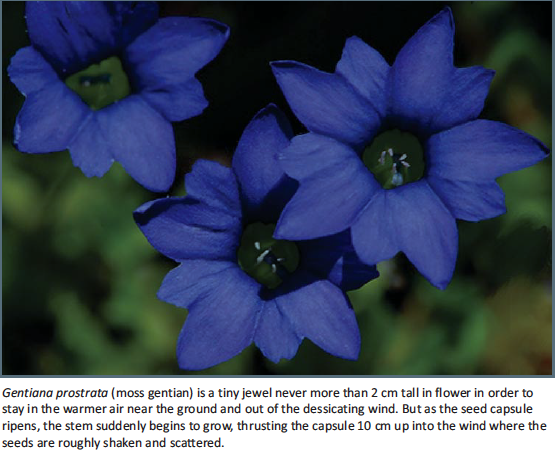 One fascinating inhabitant is Gentiana prostrata which flowers low to the ground to avoid wind but later sends a stem high to receive a sound thrashing by the wind, sending its seed flying. Over the last 30 years Ron has kept track of the life and features of this lone gem of biodiversity that exemplifies the progression of evolutionar experimentation and possibly a wider range of micro-habitats
Ongoing inventories for the entire plateau since 2014 are not complete. Of the 200 species of flowering plants (not including grasses, many rare), three red-listed, eight bluelisted can be named so far. Thirty-one species are rarely seen because of their normally remote habitat but are easily found on Pink Mountain. Seven plants that don’t normally grow on tundra, including three orchids are there as well. Soil samples indicate a high Ph on the south end indicating high levels of plant nutrients, low Ph on the north end indicate low nutrients levels; a moss study has found one red-listed, one blue-listed and two species not previously recorded in B.C. The weather stations (at the top and bottom of the mountain) indicate 0 mm of rainfall on the summit and yet the soil is moist (possibly from the uniformly high humidity at the summit). Many groundcover berries draw American Robins in the fall and support six out of seven ptarmigan and grouse species in B.C. (a remarkable concentration). Bairds Sandpiper uses the Pink Mountain tundra area as a resting spot during migration between the Arctic and South America. Seven raptors can be found including Golden and Bald Eagles, American Kestrels and Sharp-shinned Hawks and Townsend’s Solitaire, Horned Larks, Rock Wren and Pine Siskin have been seen. Eighteen mammal species (not including bats) include Hoary Marmots, silver fox, pine marten and every ungulate in northern BC except Mountain Goats. The mammal of primary concern is the blue listed Northern Woodland Caribou which uses Pink Mountain daily, year round. 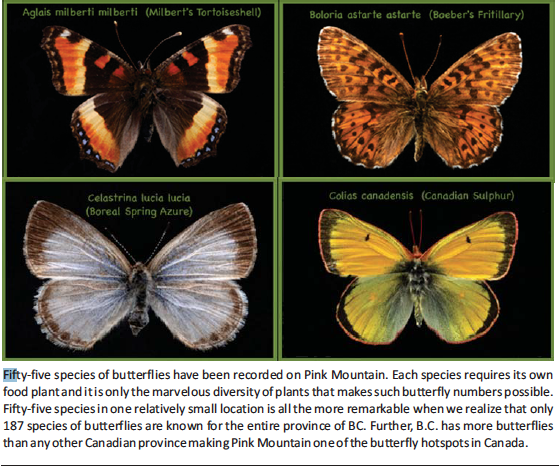 Just under 30 per cent of B.C.’s butterfly species(55 species including two bluelisted and two red-listed) have been catalogued on pink Mountain by an expert from the Czech Republic and there are an estimated 200 species of moths. Even geological features deserve scrutiny, like the rock river that melting permafrost has created. 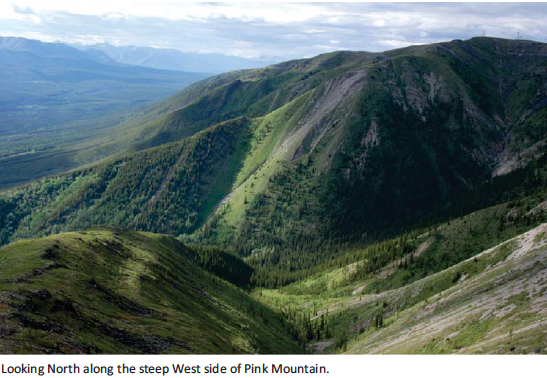 Many threats face Pink Mountain: potential placement of 40 wind turbines, (Ron hopes to persuade the company to build them further along the mountain); the proximity of fracking sites surrounding the mountain that will bring roads, trailer camps and human disturbance for decades to come; people trashing fragile plants near the fossil beds that are the reason for the Parks designation. In 2011 Ron raised $60,000 in private money and designed a research program with expert opinion coming from the UBC Botanical Garden. In 2015 Ron made personal contact with B.C. Parks and FLNRO employees in Fort St. John (none of whom had ever visited Pink Mountain) with the result that 10 of them came for a tour of the mountain. They are now seriously concerned. Another hopeful proposal, the Yellowstone to Yukon wildlife corridor within which Pink Mountain sits, is gathering momentum. Ron recommends the provincial park be folded into the ER proposal and that a new road by built in a different location. He is working on a report about this unique and endangered ecosystem. Pink Mountain is at the top of FER’s proposal and priority list. Thank you, Ron! You’re amazing! For more information and images of flora and fauna found on Pink Mountain, please visit: