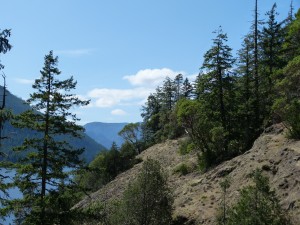 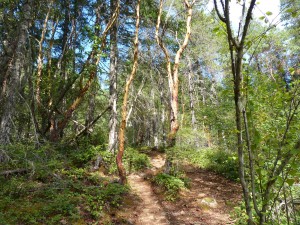 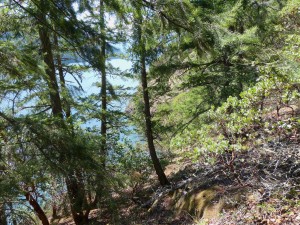 “As ER warden, I try to visit Comox Bluffs Ecological Reserve at least once a month, from April to Oct.  The CBER has two main components, lake level second growth forest and beach, and steep rocky bluffs supporting dry open-site plant communities.  The beachfront forest is attractive and accessible to those who come by ATV or boat to camp,” but Amanda also reports on some abuse in campsites used by the public. It’s unfortunate that a few individuals abuse the privilege of  visiting such a pristine ecosystem.
“I visited the reserve yesterday, Tues 25 Aug.  I arrived at the pullover about 11am, just as a loaded logging truck kicking up clouds of dust went by.  Once it was gone, I was left with a gorgeous morning, broken cloud, warm and so quiet, only the sounds of firing from the nearby Fish and Game Club!   As I entered the reserve, a young couple were walking out, carrying their tent and sleeping bags.  I introduced myself, pointed to the no camping sign and said that I hoped they hadn’t left any garbage.  They promised they hadn’t, and they didn’t look the type.  I hadn’t been to the NW corner of the reserve for a while, so I followed the old logging road up to the top of the bluffs and along the height of land.  I dawdled along, soaking up the sunshine, the palpable peace, the sweet scents of the forest and sounds of the occasional bird.