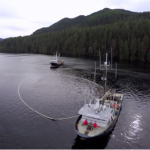 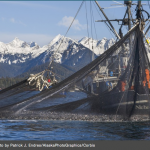 –Hakai magazine about the negative human impact on wild populations by size selection in fisheries and hunting.

The research was authored by Dr. Tom Reimchen and former students , with some of the research based on the many years of work done in the Drizzle Lake Ecological Reserve. 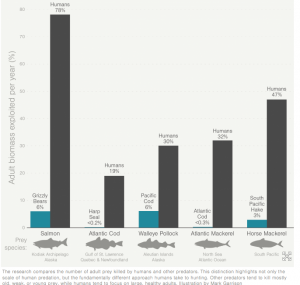 Graph from the Hakai article

ABSTRACT:
“Paradigms of sustainable exploitation focus on population dynamics of prey and yields to humanity but ignore the behavior of humans as predators. We compared patterns of predation by contemporary hunters and fishers with those of other predators that compete over shared prey (terrestrial mammals and marine fishes). Our global survey (2125 estimates of annual finite exploitation rate) revealed that humans kill adult prey, the reproductive capital of populations, at much higher median rates than other predators (up to 14 times higher), with particularly intense exploitation of terrestrial carnivores and fishes. Given this competitive dominance, impacts on predators, and other unique predatory behavior, we suggest that humans function as an unsustainable “super predator,” which—unless additionally constrained by managers—will continue to alter ecological and evolutionary processes globally.”

Former Friends of Ecological Reserves Board Member Lynne Milnes also sent these links today emphasizing the importance of Dr. Reimchen’s long term research in ER’s. ” His work at Drizzle Lake is the longest and most comprehensive research we have in an ER over so many years. The fact that this research is now being recognized internationally at the Smithsonian, Nature and Science Magazines is important and should be recognized provincially–.” 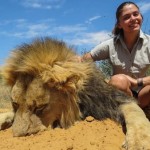 “The new study originated in a casual observation. Thomas Reimchen, an evolutionary ecologist at the University of Victoria in Canada, has spent years studying how predators impact the stickleback fish on an island 130 kilometers off the Canadian Pacific coast. Over the decades he determined that each species never kills more than 2% of the sticklebacks per year and usually attacks juveniles. Yet off that same island, fishermen seemed to be taking a far higher percentage of salmon, mostly adults. The contrast bothered him, so Reimchen and a few former students searched the scientific literature for data on the rate at which humans and other animals were killing other species.“ 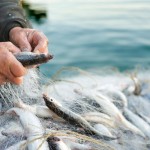 http://www.smithsonianmag.com/ist/?next=/science-nature/modern-humans-have-become-superpredators-180956348/
“The new study got its start back in the 1970s, when Thomas Reimchen of the University of Victoria was studying predator-prey interactions in a remote Canadian lake. There, 22 species of trout, loons and other predators fed on stickleback fish. Despite the number of predators, the stickleback population remained steady. This was because the predators overwhelming consumed fry, juveniles and sub-adults, eating only 5 percent of the reproductively valuable adults each year.

“This situation contrasted dramatically with the commercial fishing I observed in adjacent marine waters, which were taking from 40 to 80 percent of the biomass of salmon and herring, and then predominantly the reproductive-age classes,” Reimchen recalled at a telephone press conference held on Wednesday.”