Certainly it was great news to read in the April 1, 2015 edition of the Times Colonist of the birth of another orca to the Southern Resident killer whale population. (TC April 1, 2015.) Lets not be mislead however into thinking that new births will counter the current and impending problems this species is facing in the Salish Sea which will probably lead to their extinction. 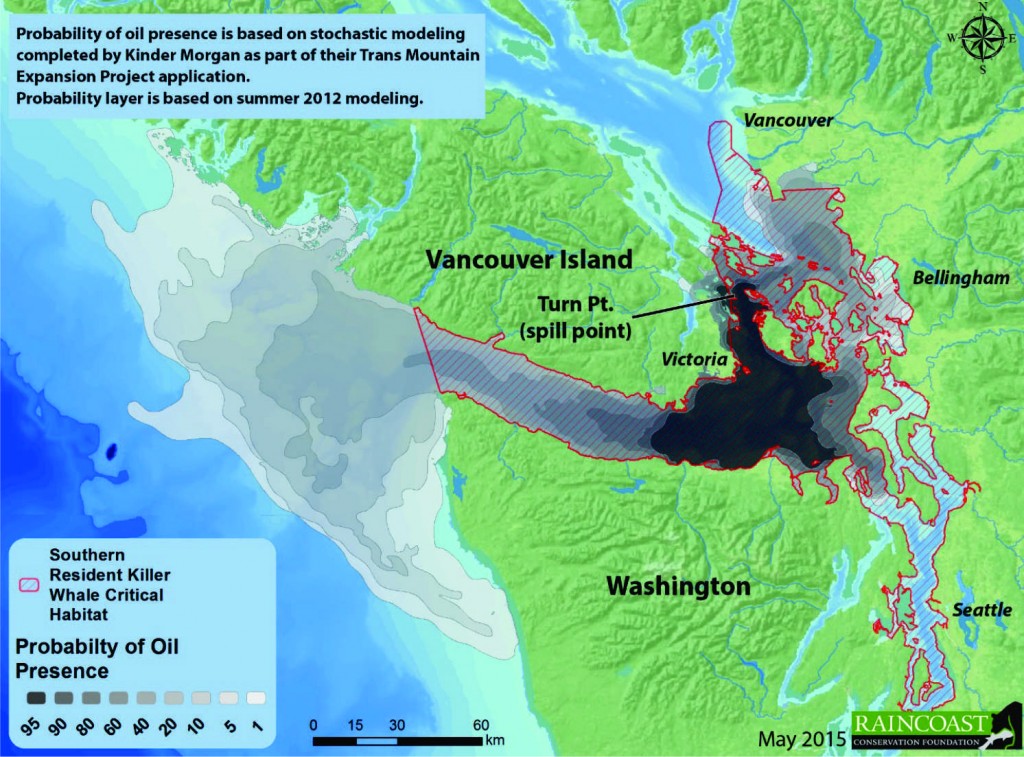 The figure shows the probability of oil presence and dispersion within the Salish Sea following an oil spill during the fall. The overlap with critical habitat of Southern Resident killer whales is significant

Contamination of their habitat, ongoing interference in whale behaviour by the boating public, overfishing of herring and salmon and now the serious risk from increased tanker traffic resulting from the Kinder Morgan/Trans Mountain Pipeline Expansion Project, (KM/TMX) have much more to do with whether or not this population of the species will survive.

The background noise from all marine vessels and the risk of ships striking whales is perhaps currently the most serious problem for survival of the whale populations. The research of BEAM Reach in Washington State has provided a stark picture of the threshold levels of acoustic noise from ships beyond which Killer whales are not able to obtain food and communicate by Echolocation.

They found that: “At least one ship is present about 40 per cent of the time and when that ship is going through the area, it reduces the range that whales can communicate by 68 per cent,” That means the whales miss about 37 per cent of calls and, if traffic doubles – as it could with increases in oil tankers from twinning the Kinder Morgan pipeline from Alberta to Burnaby and with 21 per cent more carriers and barges from proposed coal terminal expansions in B.C. and Washington – it is estimated the whales will miss 44 per cent of the calls. 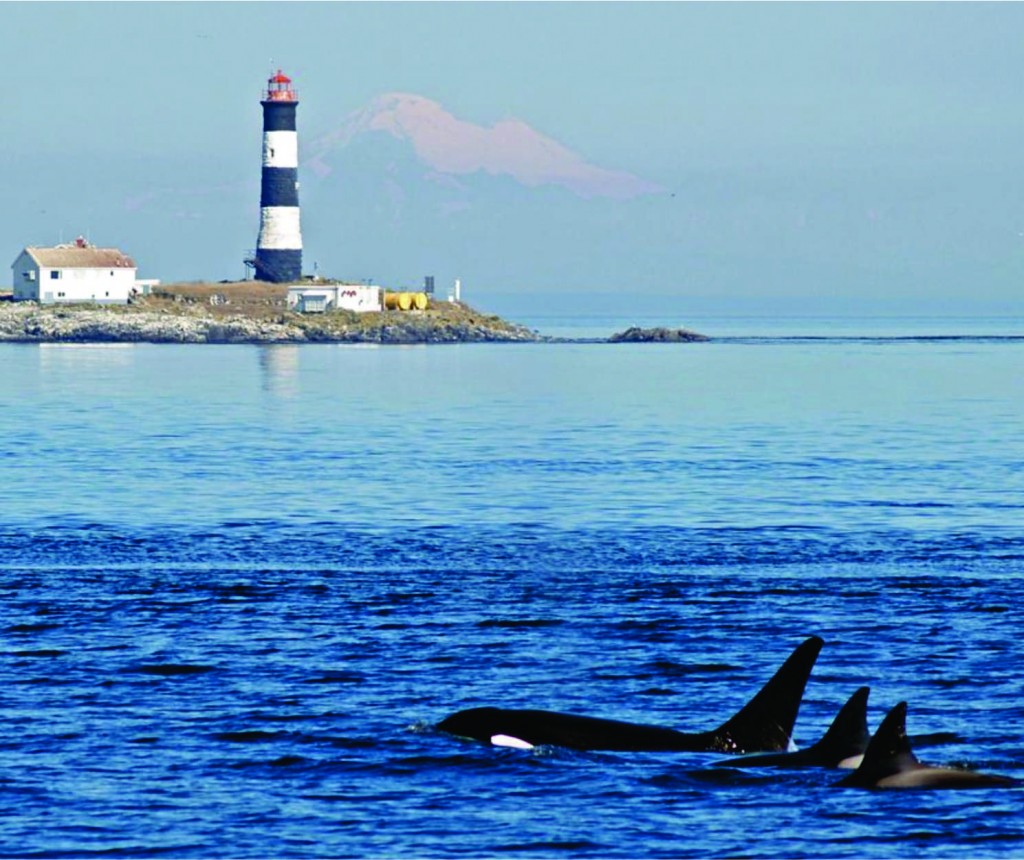 Current noise levels mean whales are already finding almost 50 per cent less fish than they would otherwise and a doubling of traffic would increase that to 58 per cent. The noise is having a significant impact as is the scarcity of chinook salmon. Canadian and U.S. government studies have pinpointed lack of salmon – and particularly the whales’ preferred diet of chinook – noise and pollution as the major threats faced by the resident killer whales.

In January of this year the Department of Fisheries Canadian Science Advisory Secretariat, Pacific Region issued a report which dealt with the inadequate aspects of the environmental assessment process that KM/TMX has done in its Application for the Project.

In the report entitled “Sufficiency Review of the Information on Effects of Underwater Noise and the Potential for Ship Strikes from Marine Shipping on Marine mammals in the Facilities Application for the Trans Mountain Expansion Project,” the conclusions are clear:

“There are deficiencies in both the assessment of potential effects resulting from ships strikes and exposure to underwater noise in the Trans Mountain Expansion Project Application documents.

There is insufficient information and analysis provided with which to assess ship strike risk in the Marine RSA from either existing or Project-related traffic. Ship strike is a threat of conservation concern, particularly for baleen whales such as Fin Whales, Humpback Whales and other baleen whales (Gregr et al. 2006). If shipping intensity increases as projected in Section 4.4 in the Marine RSA and the Strait of Georgia and Juan de Fuca Strait as a whole, the significance of this threat to cetacean populations that occupy the region will increase.

Incidence of recovered whale carcasses is not considered to be an adequate measure of the frequency of ship strikes. No information is provided about the speed and maneuverability of Project-related ships or the distribution of whales in relation to the shipping lanes. Analyses that

consider the statistical probability of ship-whale encounters and the risk of collisions are considered appropriate methodologies to assess this potential effect.

The JASCO MONM model, as it has been applied by the Proponent, is not adequate to assess the overall impact of noise from increased Project-related traffic. Although state-of-the-art acoustic modelling has been used to model the noise propagation associated with a single Project-related tanker in the Marine Regional Study Area (RSA) used to set the boundary of the KM/TMX environmental Assessment), only four locations were chosen to represent acoustic marine noise from with the Marine RSA; therefore, the assessment does not adequately represent the noise exposure for the entire time a marine mammal would be in the RSA. The assessment represents only Project-related tanker traffic and not the current noise environment or the potential increase due to Project-related traffic.

Finally, the method used to assess the significance of impacts from the modeled noise level contours resulting from a single Project-related tanker and tug on indicator cetacean and pinniped species is qualitative and the lack of an appropriate assessment framework reduces DFO’s ability to evaluate the assessment.”

Whales are just one ecological component that is at risk with this project. In the Strait of Georgia and the Strait of Juan de Fuca, within just a few kilometres of the tanker traffic lanes, harbour seal and elephant seal birthing and haulout sites, sea lion colonies, sea-bird nesting, migrating and overwintering habitat are all being part of the sensitive ecosystem which supports numerous fish, invertebrates and algal communities. All are at extreme risk from increase in chronic oil contamination, (from bilge and exhaust from marine vessels) and a catastrophic oil spill which is predictable given the level traffic which will be going through Boundary passage, Haro Strait and the Strait of Juan de Fuca if this project were allowed to go ahead as proposed.