Please visit: https://ecoreserves.bc.ca/2015/05/28/final-evidence-report-tmx/ to view the report in its entirety.

Executive Summary from the Report

This evidence report from Board of the Friends of Ecological Reserves (Board of FER) is for the National Energy Board (NEB) to inform their decision on the Kinder Morgan Trans Mountain Permit (KM-TMX) Application. We have reprinted only the Executive Summary due to the length of the whole report. 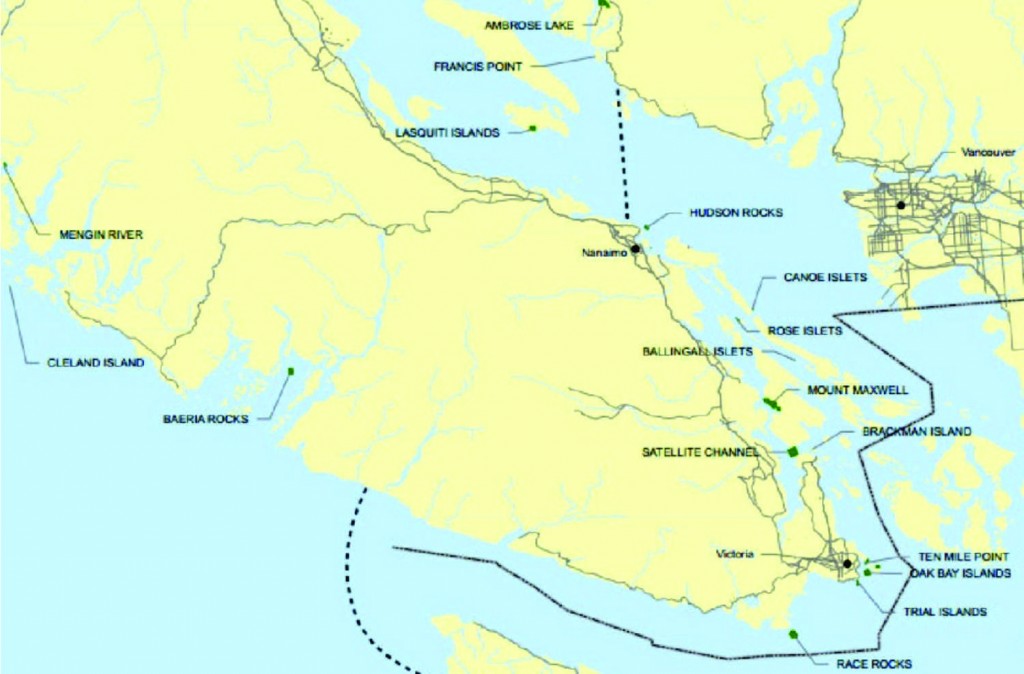 FER is a small non-government organization (NGO) that through volunteer efforts supports Ecological Reserves (ERs) and BC Parks staff who have the legal responsibility to manage ERs. FER was formed 32 years ago with goals to maintain and enhance ERs so that they meet their intended legislated purposes as defined under the Ecological Reserves Act of BC. Those purposes are to serve as natural area benchmarks for research, education and monitoring for the benefit of British Columbians, government agencies, scientists and First Nations. We outline why monitoring and research in the 19 marine ERs along the tanker route is important to improve ecosystem understanding over the life of the KM-TMX project (30+years). Research and monitoring information (baseline and ongoing) is critical in the event of an oil spill and restoration. This report recommends to the NEB a number of permit conditions patterned after the permit conditions applied to the Enbridge Northern Gateway project. If this project is approved, the recommended conditions are intended to ensure that collection and maintenance of information about the natural environment will occur over the life of the KM-TMX project so that knowledge-based incremental improvements can be made.

the oil tanker route. We present a case for pre- and post-spill monitoring in ERs as fundamental to understanding marine ecosystems under natural conditions and to learn of their resilience and/or restoration capability in the event of an oil spill. The Board of FER focused on three of the 11 issues identified by the NEB. These are:

Issue 4: cumulative environmental effects that are likely to result from the project;

Issue 5: potential environmental and socio-economic effects of marine shipping activities including the potential effects of accidents or malfunctions that may occur;

Issue 11: contingency planning for spills, accidents or malfunctions during operation of the project.

We conclude that the environmental reports submitted by KM-TMX have failed to address these issues and that the KM-TMX project as submitted should not be approved. If the project is approved, our recommended conditions are intended to ensure that information to address Issues 4, 5 and 11 will be obtained during the life of project and inform emergency spill planning, habitat compensation, and species and ecosystem resilience susceptibility to the toxic effects of Dilbit.

Chapter Two outlines how the Board of FER gathered evidence and participated in the NEB KM-TMX process. This was and continues to be a time-consuming process and our participation would not have been possible without support from the NEB Participant Funding Program. We learned that the NEB process is flawed, as it does not include the opportunity for intervenors to cross-examine the proponent nor pose questions of Canadian government agencies with legal responsibility for environmental monitoring and oil response. We trust that in the future there will be a national energy strategy with clear policies to meet carbon emissions targets within time limits in order to mitigate climate change, so that projects such as KM-TMX can be assessed in a broader context along with alternate energy investments and subsidies. We are unclear from information brought to the process, the extent to which KM-TMX contributes taxes in Canada and the extent to which Canadians subsidize oil energy in general and KM-TMX specifically.

Chapter Three lists the 19 marine ERs potentially impacted by the KM-TMX project. For each reserve there is a summary description of the values, a list of the threatened and endangered species, estimated shoreline lengths, and summary of current monitoring and research gaps. The Board of FER is concerned about the inadequacy of baseline monitoring in ERs as well as research and monitoring gaps in the broader marine ecosystem. 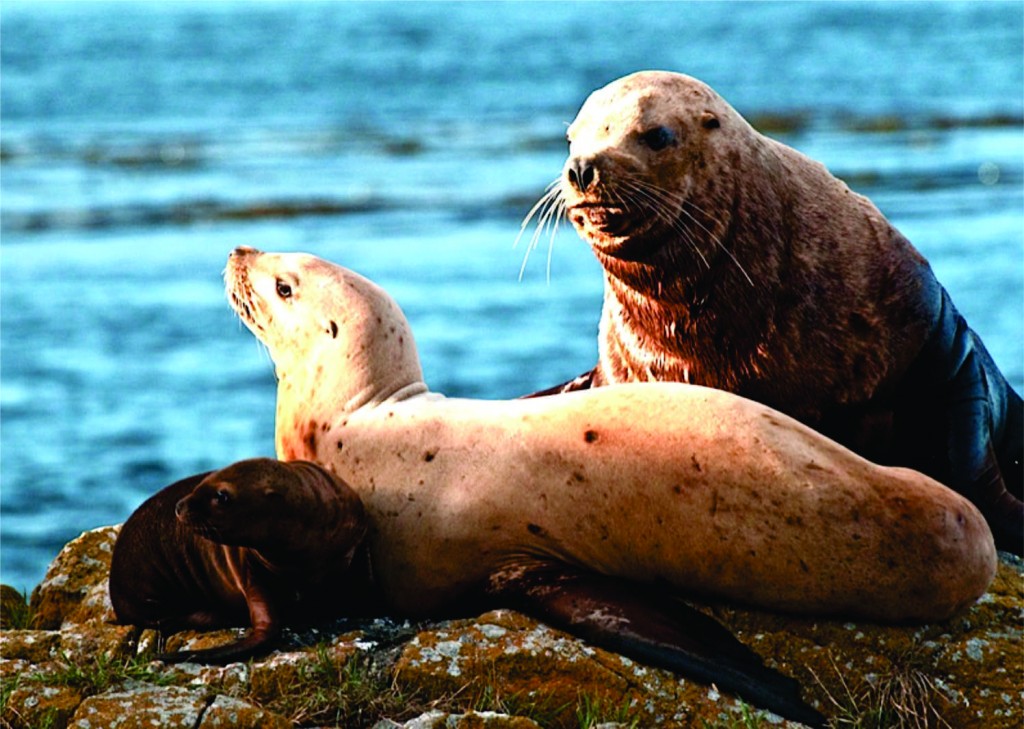 Also in Chapter Three, we review monitoring for species (some listed) such as: killer whale, elephant seal, California sea lion, northern (Stellers) sea lion, river and sea otter, marine birds, over-wintering birds, salmon, rockfish, forage fish and invertebrates associated with ERs. These sections highlight several intervenors’ calls for better assessment of the potential damage to fish resources and others too identify huge gaps in what has been presented by KM-TMX. The proximity of a number of rockfish conservation areas along the tanker route has not been given the concern that it deserves. The diverse habitats of forage fish, invertebrates, sea grasses and marine algae appear to have been entirely discounted in assessments done by KM-TMX. Essential marine food webs have been ignored from the assessment. Lack of knowledge of the abundance and importance of the highly diverse community of invertebrates is a gap. A failure to consider any indicator species shows a lack of scientific rigour in the KM-TMX assessment reporting. On some of the island reserves, the rare terrestrial plant associations were not mentioned in KM-TMX impact reporting, even though air-borne dispersal of pollution from sea spray in the event of an oil spill would very likely lead to local extirpations. Even the Committee on the Status of Endangered Wildlife in Canada (COSEWIC)-listed “species at risk” in several ERs have not been addressed, so we include what species were absent from KM-TMX reports along with our concerns and we have provided references and excerpts from more recent studies to KM-TMX.

Chapter Four reviews lessons learned by the Board of FER through our review of the KM-TMX documents and Information Requests (IRs) #1 and #2. The text of communications between the Board of FER and KM-TMX is provided in table summaries in Appendices B (IR#1) and C (IR#2). We outline our experience through these two rounds of IRs and read the KM-TMX responses to other intervenors’ requests too. We filed motions to compel KM-TMX to provide full and adequate responses. We got little additional information as a result. We see a lack of leadership and commitment by KM-TMX to address our questions and to address NEB Issues 4, 5 and 11. We now understand KM-TMX is diligently working to limit their role in marine systems to solely support the Western Canada Marine Response Corporation (WCMRC) and are content to have agencies such as the Canadian Coast Guard (CCG), the BC Government, Department of Fisheries and Oceans (DFO) and volunteer groups such as FER, monitor and improve knowledge on how to manage the increased risk to marine ecosystems from the KM-TMX project. KM-TMX will be content if no multi-stakeholder forum is put in place to review and provide information that would in future compel changes in practices based advances in learning on how to best reduce risk. We concluded that KM-TMX has not accepted any level of responsibility or accountability for marine systems despite the NEB direction to address the marine environment and impacts. 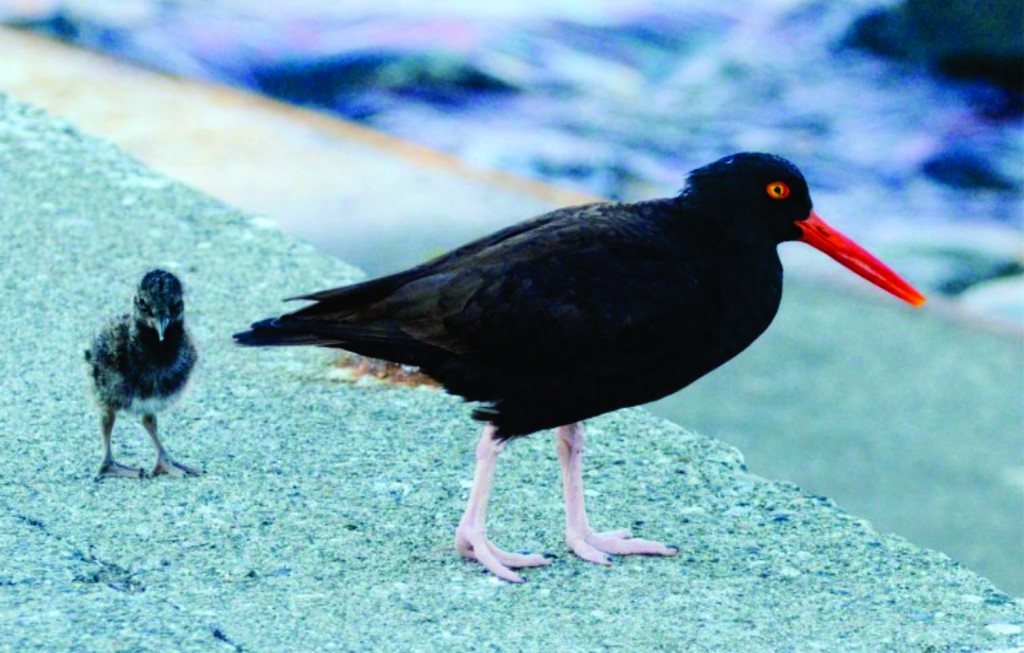 Black Oystercatcher adult and chick. These birds nest in the upper intertidal zone of rocky islands of the Race Rocks Ecological Reserve (Photo by Raisa Mirza 20 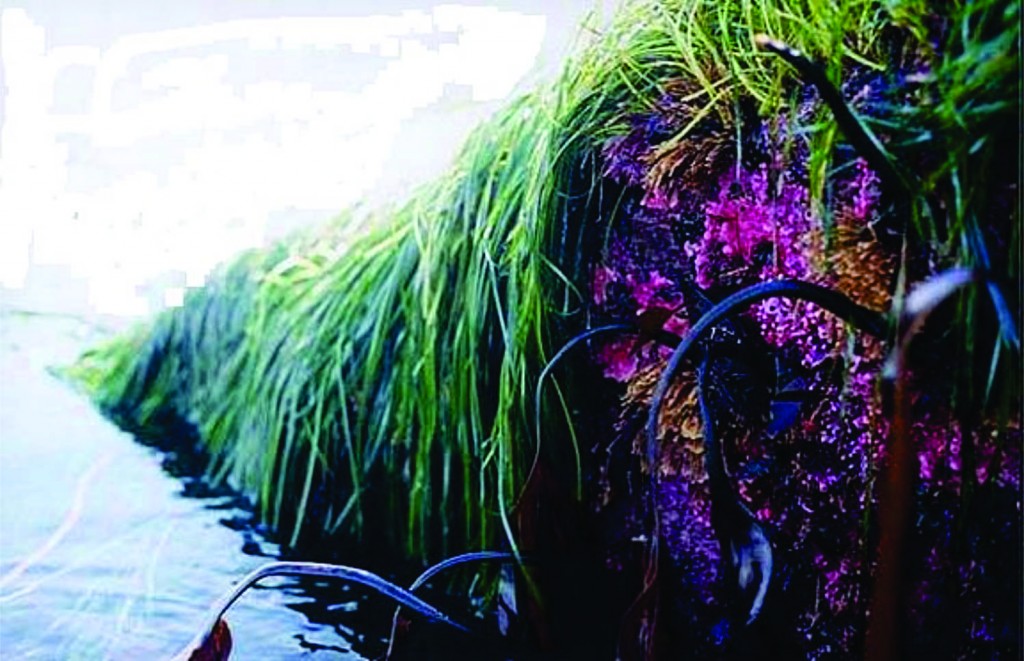 During Information Requests #1 and #2, KM-TMX showed no interest in commitments and weak collaboration with a variety of stakeholders. No voluntary commitments were made by KM-TMX similar to those made by Enbridge. We have learned that KM-TMX is not interested in participating in acquiring knowledge in the marine environment, nor being involved in developing incremental improvements to tanker traffic and risk reduction strategies, nor having a structured forum in which to periodically review newer information, practices and plans. KM-TMX responses to many of our questions, has been to provide assurances that agencies such as WCMRC (a subsidiary of KM-TMX), CCG, Environment Canada and the BC Government have responsibilities for spilled oil clean-up and that tankers carry insurance. KM-TMX has convinced itself that it has no responsibility beyond the Westridge Terminal and none for oil in the marine environment. The Board of FER disagrees and sees KM-TMX as abdicating responsibility for marine transport while adding huge risk. We conclude that only through permit conditions can KM-TMX be brought to account for, and contribute to learning how to manage and mitigate the risk to marine ecosystem. KM-TMX expects to get a free ride for oil transport in the marine portion of their export business. Unless the NEB requires sufficiently stringent permit conditions, the Board of FER fears that this will come to pass.

Chapter Five recommends to the NEB 12 Permit Conditions for the KM-TMX project. We argue these conditions (based on Enbridge conditions) need to be longer-lasting and at arms-length from KM-TMX. This is because the Salish Sea and Strait of Juan de Fuca have much higher population density, greater concentration of shipping (risk of accidents) and the higher concentration of environmental values linked to the Fraser River Estuary, Strait of Georgia and Strait of Juan de Fuca. These conditions need to be at arms-length from KM-TMX but involve KM-TMX. KM-TMX’s lack of interest requires an arms-length arrangement to allow others interested and knowledgeable in marine ecosystems a collective role towards an uncertain possibly environmentally devastating future. An overview of the recommended conditions follows:

Chapter Six is a tabular summary of the Conditions recommended by Board of FER to the NEB.

Appendices: Appendix A is a letter of support to the BC Government for disclosure of spill preparedness plans and is included with this report.

Appendix B is a summary Information Request #1 and the KM-TMX response and a separate document.

Appendix C is a summary of Information Request #2 and a separate document.

Please visit: https://ecoreserves.bc.ca/2015/05/28/final-evidence-report-tmx/ to view the report in its entirety. 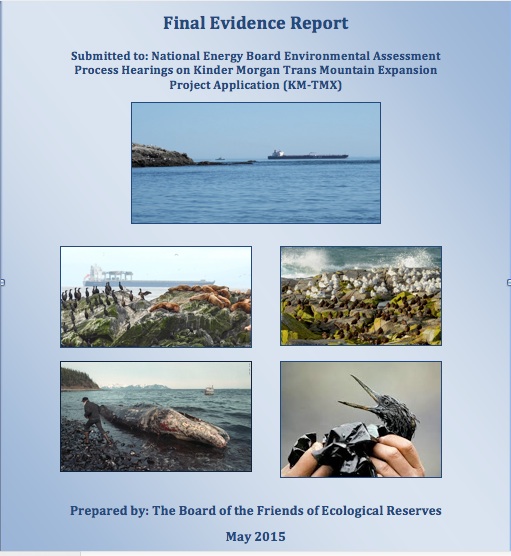