In the 2014 Spring/Summer LOG, our editor Louise Beinhauer provided an excellent summary of the Information Requests that Friends of Ecological Reserves provided to Kinder Morgan (KM). This summary is located at: http://wp.me/p4y4il-57h . 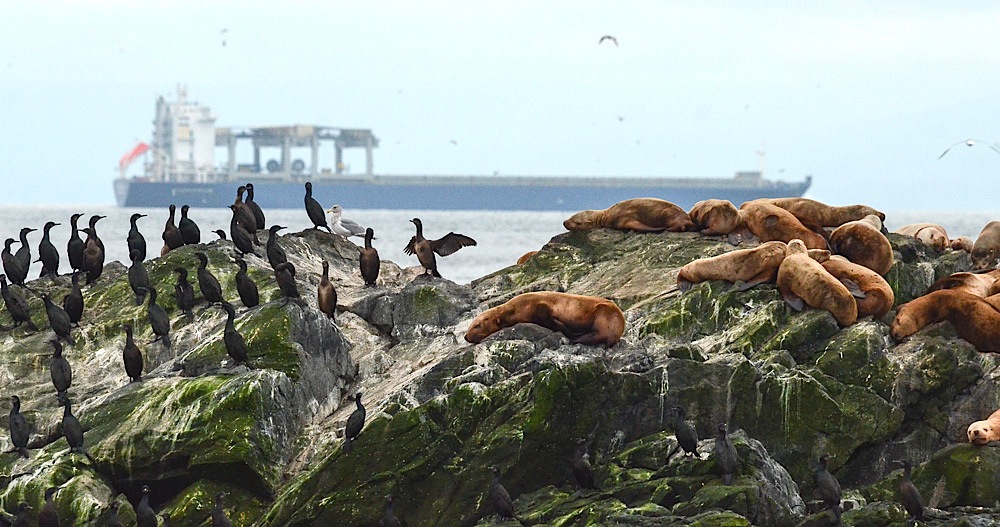 On July 3rd the Board of the Friends of Ecological Reserves (FER) filed a ‘Notice of Motion’ to compel full and adequate response from KM. Kinder Morgan did reply to our specific request but in our review, we concluded that of the 26 information requests made, KM was unable to provide a single adequate response. To justify such a conclusion we provided a rationale to KM on why we interpreted their responses as non-answers and in turn KM responded that they believed they had indeed answered our questions.

An example of their standard response was; “The requested information has been provided and Trans Mountain’s response is full and adequate. The response provides the Board with all necessary information pertaining to this matter. There is no further response required and supplementing the original response will not serve any purpose. Trans Mountain notes that if the Intervenor disagrees with the information contained in the response, it may contest the information through evidence or final argument.”

Our Information Requests and responses and counter responses have been formatted into a 50-page Table with rationales and can be viewed on the FER web site along with other Important National Energy Board (NEB) – Kinder Morgan information (http://wp.me/p4y4il-59A). 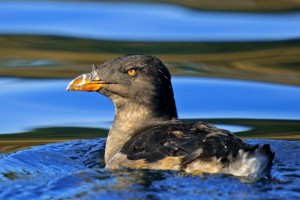 There are a staggering number of intervenor submissions, KM filings and NEB responses that are filed daily. These can all be viewed at the NEB site: https://docs.neb-one.gc.ca/ll-eng/llisapi.dll?func=ll&objId=2484704&objAction=browse&viewType=1.

In general terms, through this process FER was seeking a level of commitment from KM who largely responded through their consultants. We have been asking the proponent to recognize a robust set of marine indicators, a study area that includes all areas that would be impacted by an oil spill, and a commitment to engage at some level, environmental monitoring over the life of their project so we can develop or contribute knowledge to specific spill contingencies and recovery plans for ERs. We believe these are reasonable requests in light of the 400 percent increase in tanker traffic their project would bring and the risk and uncertainty of recovery of sensitive ER marine systems.

Given that the National Energy Board approved the Northern Gateway Pipeline with 209 permit conditions, the possibility exists that KM may be approved with a similar set of conditions.

FER did a brief review of the conditions set out in the NEB Northern Gateway Panel report appendix 1. See: http://gatewaypanel.review-examen.gc.ca/clf-nsi/dcmnt/rcmndtnsrprt/rcmndtnsrprtvlm2-eng.pdf. These conditions appear cursory and non-binding and insufficient for safeguarding and restoring sensitive areas such as ERs along both the pipeline and the tanker route.

FER believes that there are real benefits to the NEB to understand environmental monitoring and the importance of baseline data to build a spill recovery plan and measure post spill recovery. This information is needed to assess impacts and liabilities.

FER, through the proponent funding program, submitted a budget in April of 2014 with an aim to have a report prepared for NEB on the role of ecological monitoring. There have been expectations raised that these large projects would need to be done to “world class” environmental and oil spill response standards.

The words “world class environmental standards” have been used by both the Provincial and Federal governments to describe oil tanker safety. The focus has been on tanker hulls. FER believes that pre-project and life-of-project environmental monitoring are reasonable elements of “world class oil spill response standards” and shipping oil through productive and sensitive marine ecosystems needs to go beyond tanker design to actual spill management and recovery provisions.

What does all this mean? Reading the NEB terms of reference, FER understands that marine shipping and oil spill response are part of the scope for these hearings, and Kinder Morgan has an obligation to address these issues. “The potential environmental and socio-economic effects of marine shipping activities that would result from the proposed project, including the potential effects of accidents or malfunctions that may occur”. (Appendix 1 hearing order, http://wp.me/p4y4il-59O. But we are uncertain that KM and the NEB has acknowledged this responsibility for the marine environment and the need for providing monitoring over and above what is being done by Fed-eral and Provincial governments. 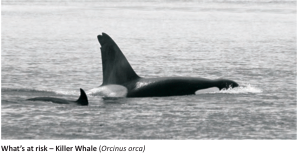 FER has little confidence in the ability of Canadian Wildlife Service, Department of Fisheries and Oceans, Canadian Coast Guard and BC Environment with regard to additional work and incremental improvements to monitor environmental indicators. There is a need to develop a strategic plan on how to respond directly in the event of an oil spill, how to contribute significantly to the infra-structure and how to maintain this for trained spill responders over the life of the project. It is not clear how liability is being determined and divided proportional to risk and recovery post spill. Our government agencies continue to be downsized and so a change in priorities to respond to a major new work load seems unlikely.

This leaves the decision to the NEB on whether a potentially serious polluter should pay for some of the infra-structure needed to financially support a strategic oil spill plan. Prior to project implementation, there needs to be sufficient clarity and transparency on how to manage and mitigate anticipated impacts. NEB can include a great deal, in terms of permit conditions, to shift some of the burden onto the proponent. In a review of 209 conditions for the Northern Gateway, we did not find a shift towards increased pre-project planning provisions.

After reading the Diluted Bitumen (DILBIT) material safety sheet, we are concerned about who can safely handle spilled DILBIT. This safety sheet is posted on the FER website at: http://wp.me/p4y4il-59Q. 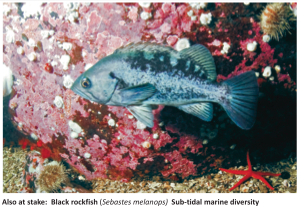 FER believes our proposed project is fundamental to providing insight on current baselines, spill responses, clean-up, mitigation and understanding of environ-mental risk and liability. Our interpretation of the KM response to our Information Requests is that Kinder Morgan does not feel that they need to be involved in the marine environment, either for monitoring or oil spill clean up and mitigation. The concerns raised are between the provincial government departments, KM and tanker operators involved through insurance and fees that support the Western Canada Marine Response Corporation http://www.bcshippingnews.com/magazine/focus/oil-spill-response.

The BC government too has been frustrated by KM and filed a motion to have NEB compel KM to file the spill response plan of this company. This is still pending .

FER met with BC Parks senior management in November and discussed briefly preparedness of the BC government and BC Parks in particular in the event of an oil spill. We learned that the BC government response is being coordinated by the BC Ministry of Energy and Mines and that the government of BC will speak with one voice. It was unclear if Energy and Mines had BC Parks’ input on their role in spill response. The Environmental Protection Division has developed a marine oil spill reporting system.( http://wp.me/p4y4il-59R)

FER remains focussed on 17 marine ERs and seeks environmental baselines to build a spill response plan. FER is unclear what other governments (municipal and regional) along the tanker route are planning for spill responses or their communications with Energy and Mines who are leading the BC government involvement.

In November, Mark Eliesen withdrew from the NEB process as he determined it is too flawed. He was a president of BC Hydro, and he sat on the board of Suncor Energy. He was also former CEO of Manitoba Energy Authority and Ontario Hydro. In total, he has worked for seven governments and nine ministers of the Crown. He was a high profile intervenor. His concerns were with the sincerity and transparency of Kinder Morgan’s responses. Some are repeated here.

Mark Elisen was not only critical of KM but identified NEB as managing a flawed process, “NEB, in an unprecedented fashion, has rejected the previously established practice in Section 52 public hearings on oil pipelines to provide for oral cross examination on the evidence submitted at the hearing. The Board maintains that two rounds of written information requests is sufficient to test the evidence. Even the Government of Canada’s Department of Justice (DOJ) has informed the Board that evidence given without cross-examination should be rejected. The DOJ stated “Canada’s position is that cross-­examination is necessary to ensure a proper evidentiary record…” Furthermore, “cross -­examination serves a vital role in testing the value of testimonial evidence. It assists in the determination of credibility, assigning weight and overall assessment of the evidentiary record. It has been termed ‘the greatest legal invention ever invented for the discovery of truth’…without cross-examination the Board will be reviewing only untested evidence.”

A podcast providing Mark Elisen’s reasons for withdrawing and how the public interest is not being addressed can be found at: http://podcast.cbc.ca/mp3/podcasts/bcalmanac_20141104_41617.mp3.

Eliesen’s withdrawal gave many intervenors pause to consider their own involvement with a seriously flawed process and FER was no exception. We are grateful to Mark for his frank assessment of Kinder Morgan and the NEB and making public the flaws of the process. FER has no public profile equivalent to that of Eliesen and doing so would have cut ourselves off from receiving information and from participation. There was also no mass exodus of other intervenors. 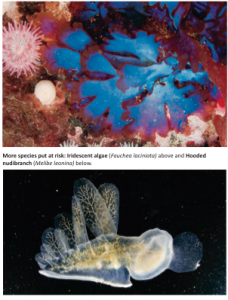 There have been some calls for the BC Government to do their own review through its authority under the BC Environmental Assessment Act. This is being discussed at senior levels in the BC government. BC opted out of its provincial process because the Federal process was purported to be equivalent.

Robyn Allen, another high profile intervenor and former CEO of the Insurance Corporation of BC, filed a motion to stop the KM – NEB hearings because the company made corporate transfers to reduce corporate liability of the parent company and she argues that under Section 74 of the NEB Act such transfers need approval by the NEB and whether this corporate shift of liabilities is in Canadian public interest. Basically the same company that filed for project approval needs to be the same company at the end of the process. KM has denied it contravened the NEB Act. http://www.vancouversun.com/business/fp/resources/Intervener+argues+Kinder+Morgan+needs+approval/10413834/story.html. It is not clear at this time how the NEB will respond.

FER remains concerned with the risk to the environment in general and specifically to ERs along the tanker route. We are also concerned about the corporate risk being shifted to the province and more explicitly to local residents who will have to accept a higher risk. Whether a smaller pipeline-only subsidiary is permitted to continue within the NEB process is unclear.

Next steps for FER will be filing a second Information Request (IR) to Kinder Morgan due early in the New Year. We are contemplating the IR at the presenttime. By remaining in the process, FER can apply to make a presentation to the KM panel as intervenors sometime before next September.

The website URLs referred to in this article may all be accessed through the Friends of Ecological Reserves website at this link: https://ecoreserves.bc.ca/category/issues/oil-spill-threat/.