Are ERs Fulfilling Their Mandate for Research and Education?

When Ecological Reserves (ERs) were first being set up from 1971 on, some universities and colleges in British Columbia went to great lengths to involve their faculty and students in baseline research and ecological documentation. In this presentation, the following areas will be highlighted:

From the LOG, The Friends of Ecological Reserves Newsletter, Autumn /Winter, 2013

Currently, with the onset of changing environmental conditions, and advances in remote sensing technology, there is a strong case to be made for getting back into the field to revisit the reserves to follow up and add new benchmarks to previous baseline monitoring.

The potential for Research in the Race Rocks Ecological Reserve will also be presented to demonstrate the accessibility for research in a marine ecological reserve where the unique situation of on-sight housing is available. 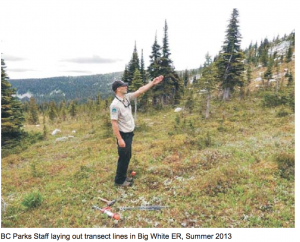 Recent Information from BC Parks Permit Office indicates that there are currently 27 active research/education permits and that doesn’t include the research being conducted by BC Parks staff, which, although not done under permit, should be added to the list.

Long term Ecological Monitoring by BC Parks Staff began in 2011, and by 2013 there were 50 sites established.

The 2005 “State of British Columbia’s Ecological Reserves” emphasized the need for developing and implementing a baseline inventory and monitoring program for Ecological Reserves. It recommended a five-year research strategy to address key knowledge gaps related to: 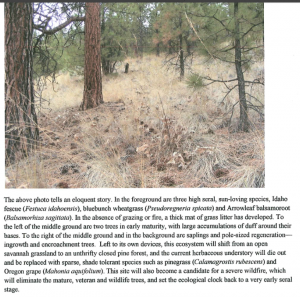 Some examples of research reports on the FER website (available from the “Research” item in the index of the individual Ecoreserves at https://ecoreserves.bc.ca  include: 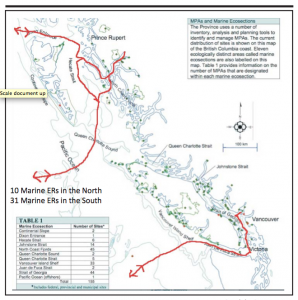 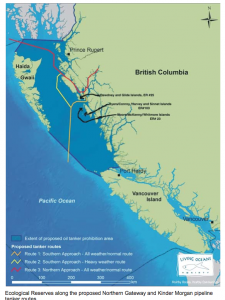 A minimum requirement for Environmental Impact research would be adequate baseline research on the Ecological Reserves along the proposed Northern Gateway and Kinder Morgan Pipeline tanker routes. So far very little, if any has been done.

I recently found out that Fisheries and Oceans Canada has an Active Permit for monitoring in Rose Spit, Dewdney and Glide Islands and Vladimir Krajina Ecological Reserves.

There is rich research potential at Race Rocks ER # 97. Over the years research work has ranged from a Post-Doctorate study of Filter feeding sponges undertaken by an Israeli researcher at UVic to an introductory research paper entitled “The Ecological Niche of Anthopleura elegantissima at Race Rocks” by a Pearson College student. Links to this research is available at: https://ecoreserves.bc.ca/category/97+research/research

Several papers have been done by Dr. Anita Brinckmann-Voss on hydroids using samples collected under her permit since the 1980s. Anita has been able to identify species of hydroids, now numbering over 70. This type of taxonomic work is getting harder to accomplish as taxonomic skills are no longer a priority of many younger researchers. 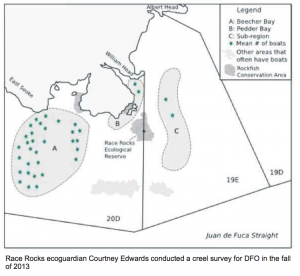 This fall, Race Rocks Ecoguardian Courtney Edwards did observations from the top of the tower as part of a DFO contract for a creel survey. Over the course of the two and a half months of single-time-point sampling, the Ecoguardians counted a total of 2,172 boats fishing within the two areas. The most boats seen fishing on a single day was 129, and with an average of 17 plus or minus 2. The most boats running on a single day was 10, with an average of 1.5, plus or minus 0.2.

There are, however, gaps in research at Race Rocks ER: 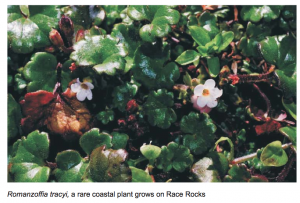 Many more research ideas could be entertained. There is easy access to many opportunities for research on macroalgae and plankton communities. Romanzoffia tracyi, a rare coastal plant grows in several patches on the island.

There are potential marine mammal studies that could be done as there are resident harbor seals (birth colony), elephant seals (birth colony), California sea lion, Northern sea lion and river otters present. There are also occasional sightings of porpoise species, Orcas, humpback whales, gray whales and the first sea otters have shown up in the last two years.

Fish species could be included in studies. Many sculpin species, wolf eels, rockfish species, salmon, ling cod, kelp greenling, cabezon, gunnel and three cartilaginous species have been photographed in the waters off Race Rocks. At least eight species of Tunicates have been recorded and photographed.

In 2000 as a member of DFO’s Marine Protected Areas (MPA) Advisory Board, I proposed buffer zones for the MPA. They were not accepted partly because of objections from the Sport’s Fishing community. Benefits however for fish enhancement, could be considerable. Adequate research was not available to show that possibility.

What is Involved in Doing Research at Race Rocks?

Lester Pearson College maintains the facilities at Race Rocks under a long-term lease arrangement with BC Parks. It is one of the few ERs with housing available to researchers.

The Marine Science Centre residence is the building that formerly housed the assistant light-keeper at Race Rocks. It is equipped with a kitchen, including fridge, stove and basic eating and cooking utensils, as well as internet access, and can accommodate six researchers. Visitors supply their own linens and food. Requests for use of the facilities must be accompanied by a proposal to Pearson College outlining the purpose of the visit. For researchers, there is a $30 fee per person per night. 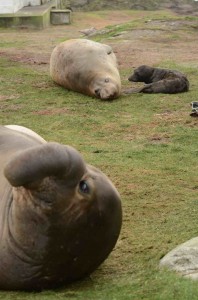 Male elephant seal in foreground, with female and pup in the background. The pup was born at race Rocks, January 14, 2014. (Photo by Alex Fletcher)

If SCUBA diving is needed for research, arrangements may be made with the Director of Operations for Race Rocks. Special safety precautions will be required as it is a high current area. A boat tender must be available for emergency pick up. More information about Permits and arrangements for transportation and housing can be obtained by contacting Chris Blondeau at Lester Pearson College, 250-391-2411.

As the Ministry of Environment benefits from the free science information that researchers bring, FER feels that the current permitting process needs to be reviewed and significantly improved in order to provide better service to the research community. There is no application fee or any other permit fees charged for ecological research in parks and protected areas as research is deemed to be a public good. However, there is a 60 day turn around period expected on Education and Research Permit applications, but that is flexible and according to the permitting office. The onus is on Parks Area Supervisors to get them approved. By comparison, the Ministry of Forests, Lands and Resource Operations staff must process small scale salvage permits and approve or deny a permit request within two days of receiving it.

If MOE and FER are to attract researchers and their funding, the current process is too protracted in our opinion.

The proposed activities are assessed by regional staff to ensure that they are consistent with the purpose for which the ER was established. Then BC Parks staff conducts an impact assessment using the established process (see http://www.env.gov.bc.ca/bcparks/conserve/impact/impact.html to determine if there are any social, cultural or ecological impacts associated with the proposed research activities.

If the activities are deemed suitable, BC Parks staff then consults with First Nations and/or other stakeholders. In some cases, this may involve coordinating with other jurisdictions or with other regions, particularly when the proposed research activities take place over a larger geographic scale. Once a complete application is received, BC Parks strives to process, adjudicate, and issue an Ecological Reserve permit in 60 business days.

To view the complete presentation see: