The Friends of Ecological Reserves Board is submitting an application to Participate as an Intervenor  in the National Energy Board Public Hearings for Trans Mountain Pipeline ULC Trans- Mountain Expansion Project.

The project would expand the existing Trans Mountain pipeline system located between Edmonton AB, and Burnaby, BC, resulting in 987 km of new pipeline, and an increase in Tanker traffic through the Salish Sea from the present 5 tankers per month to 34.

* “Under the proposal, up to 34 tankers a month would be loaded with oil at a terminal outside Vancouver, then generally travel through Haro Strait and the Strait of Juan de Fuca for export to markets in Asia and the U.S.  That’s up from about five tankers a month now.The $5.4 billion expansion project would nearly triple pipeline capacity from about 300,000 to 890,000 barrels of crude oil a day to meet customer demand. Much of that future cargo will likely be diluted bitumen from Canada’s oil sands.If approved, the expansion is expected to be operational in late 2017. The pipeline is operated by Kinder Morgan Canada and owned by Houston-based Kinder Morgan Energy Partners LP.

About 6,000 large commercial vessels transit Canadian and U.S. waters toward Vancouver or Washington ports each year. Two other proposed projects also are expected to increase cargo vessel traffic in the Salish Sea region. They include the Gateway Pacific coal-export terminal proposed at Cherry Point, which could add up to 487 cargo ships a year, and the proposed expansion at Deltaport at Roberts Bank in Delta, B.C.”

The deadline for applications to submit as an intervenor is by noon of February 12, 2013.

The following is the brief summary of the concerns of  the Board which  has been included with the application: 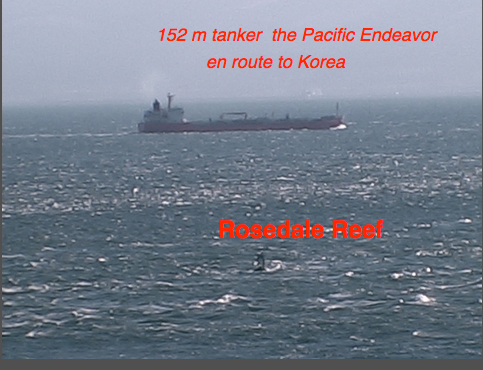 Tanker within 2 km of Race Rocks from Camera 1 on the top of the Race Rocks Lighthouse.

Tankers in the Strait of Juan de Fuca: http://metchosinmarine.ca/gf/?p=2761

Also see This file showing other ships in the same area the day this photo was taken, and a link to the Government Commissioned Risk-Analysis Report.