This report is available only by request from the Tanker Safety Secretariat in Ottawa.

But it is also included here as a PDF : transport_canada_tanker_report_accessible_eng

The figure which should be of  most concern for Ecological reserves in BC is the following: 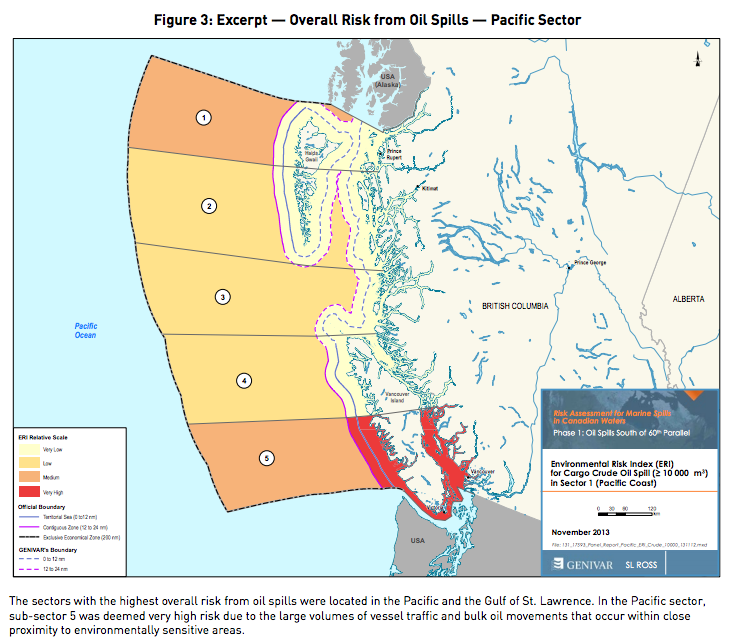 In this recent government-commissioned risk-analysis report on tanker traffic safety in Canada, figure 3 shows in vivid red  the “very high risk zone on Southern Vancouver Island. Within that area lie 17 of the province’s 33 Ecological Reserves which have a marine component within their boundaries. The report indicates that the Kinder Morgan proposal would essentially double the volume of oil passing through  an already vulnerable marine environment, the area south of Vancouver Island where Washington-bound oil tankers are common. The Trans-Mountain project website indicates there will be up to 34 tanker visits per month in this already crowded marine vessel area by 2017.

The Board of the Non-governmental Organization Friends of  Ecological Reserves, is very concerned for the ecological integrity of the reserves within this zone. Our provincial ecological reserves rely on Science-based research and serve as valuable baselines for environmental health on our coast. .  With the increase in tanker traffic resulting form this proposal, these reserves, already at risk for contamination are particularly vulnerable to irreversible ecosystem damage and extirpation of rare species as the result of the effects of ship accidents, collisions, groundings or accidents at terminals resulting in the release of toxic substances into the marine environment.

Some of the Ecological Reserves include adjacent sea floor within the reserve while others end at the high tide line, and most  of the marine reserves are islands that are home to colonies of nesting or overwintering sea birds, marine mammals and sub-tidal fish and invertebrates. Several shorefront reserves protect colonies of rare plants.  Mitigation of accidents in these ecosystems is essentially impossible.

Four marine Ecological Reserves in particular at the Southern tip of Vancouver Island would be directly exposed to contamination in the event of a marine accident in  the Strait of Juan de Fuca. The most northerly and only colony of breeding and pupping elephant seals in Canada is in the Race Rocks  Ecological Reserve in the Strait of Juan de Fuca. Also it is a winter haulout site for two species of sea lions, and a birthing colony of harbour seals. . Three seabird species  have nesting colonies on the island and the subtidal marine life in the Rockfish Conservation zone has extremely high biodiversity values. The risk for these rare colonies and populations from increased tanker traffic within a few kilometres is very high. Containment of an oil spill in adverse weather conditions and with tidal currents running daily up to 7 knots make clean up in this reserve impossible. Moreover, the population of marine birds and mammals is highest in the winter months.

We believe that the value to the citizens of British Columbia and Canada of the Natural Capital and the resulting Ecosystem Services provided by these marine reserves as well as their contiguous marine habitats far outweighs the dollar value of any profit for Canadian citizens from increased transport of bitumen offshore.