I had asked ER Warden Kathryn McCourt for an update on the Lake since I was there last year and whether there had been any  recent permits for research for the Ecological reserve  as I wanted to use it as an example of a reserve with great potential for research where there had been significant research in the past when doing my presentation at the BCPARF conference in Kamloops,  Dec 3-5,2013.

TShe writes: To my knowledge, there has been no research done on Mahoney Lake since I’ve been a warden there.On the other hand, we did count Castelleja minor minor and Centaurea exultata three times (parks staff and volunteers) over the bloom period; research, I suppose, but nothing to do with the water. “

She also sent the following pictures for comparison with pictures we took a year ago see….. 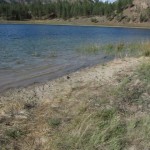 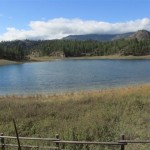 View from the south east side along the road. 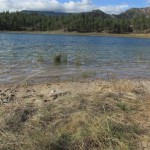 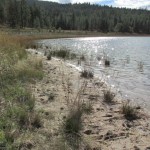 View from the south side to the western edge

These pictures were taken September 29, just a week before we were there last year. As well as I could remember, I tried to take them from the same places you did (the east and south sides). You can see the difference: the water is still much higher than in 2012, and the purple bacteria is barely visible, if at all.
Given the fact that we still have almost no snow here, it will be interesting to see what the water level is in 2014.— Kathryn McCourt , Ecological Reserve #130  Warden