Garry Fletcher went to Race Rocks to provide a tour and discussion for 6 students from Pearson College who were staying out there for their project week .  See the Race Rocks ecoguardian’s log for images of some of their work.

I was surprised to find another new location of Romanzoffia tracyi growing over by the engine room.  There are now three locations where this rare plant , (red listed ) grows on the island of  Great Race Rock. Other reference to the species in the ER can be found here: http://www.racerocks.com/racerock/eco/taxalab/genevievea.htm

Typically it anchors in cracks of bedrock with very limited soil pockets. It is a concern that the natural exposed rock outcropping, typically the habitat of  coastal species like this has over the last few years become increasingly colonized by an  introduced stonecrop species. I believe the spread of that species could be assisted  by selective grazing of more palatable species by Canada Geese, thus leaving this ecological niche available for the invasive stonecrop. This  white- flowered  low growing stonecrop (Sedum album ?) was introduced by gardening efforts of an assistant keeper back in the late 1980’s. It has rapidly colonized many of the rock outcrops. since that time.  This is one situation where it s hard to judge it to be a negative impact , since it has also colonized the large concrete surface of a reservoir , thus adding a “green-roof ” benefit.

Another observation is that the native Broadleaf stonecrop (Sedum spathulifolium) does not grow at all on this island, but grows profusely down the Strait, within 2 kilometres, on the islands of Beecher Bay.  On one of those islands, Church Island, there is also a large colony of Romanazoffia tracyi.

These images show the location of this newly observed Romanazoffia tracyi colony near the energy building on Race Rocks. 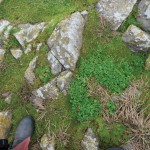 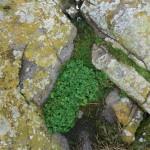 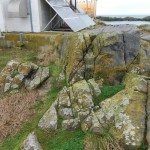 Location of the 2 parts of new colony, 2013, near the Energy building, (southwest corner)