Laurie Rockwell sent this report to his BC Parks Area Supervisor:
I toured the TCER with Garry Fletcher from The Friends of Ecological Reserves and a photographer traveling with him, Niran Lella, as they visit reserves in the Okanagan. 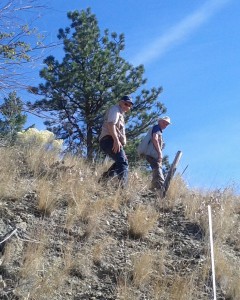 Laurie Rockwell and Garry Fletcher examining the fence line on the north side steep incline.