From the Shuswap Tourism Newsletter September 2002 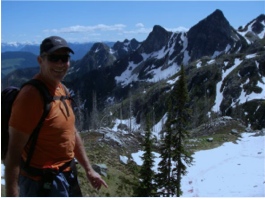 Long time champion of trails and the natural world in the Shuswap, John Coffey, died peacefully in his sleep Saturday night after a short, brave battle with cancer. John was a co-founder of the Shuswap Trail Alliance, lead trail steward, route finder, naturalist, and guide. He was an active member of the Shuswap Naturalists, Shuswap Outdoors, the Kamloops Outdoors Club, and the Larch Hills Nordic Society. The Shuswap has lost a great friend, mentor, and advocate in the wilderness who taught so many to breathe deeply and open their hearts to the natural world.

Perhaps John’s most beloved project is the Anstey Highland Traverse – a seven-stage ridgeline mountaineering route along the eastern spine of the Shuswap. Over a six year period John carefully explored, documented, and connected the proposed route in its entirety, including potential hut sites and environmental assessments. It is a body of work that will continue to be carried forward by the Shuswap Trail Alliance.

John’s family invite those who knew him to a celebration of his life this coming Friday afternoon, September 7th, from 2 – 4 pm at the family home in Salmon Arm. They ask that donations in lieu of flowers be made to the Shuswap Trail Alliance, the Canadian Cancer Society, or a charity of your choice.