Images of Amoebobacter and Copepods in Mahoney Lake ER #130

The images of Mahoney lake Ecological Reserve which appear on several Flickr sites suggest that it is a very unique ecosystem with unusual physical and biological characteristics. It is a meromictic lake, meaning a lake in which some water remains partly or wholly unmixed with the main water mass at the seasonal circulation periods, probably due to chemical density gradients, or geological formation. 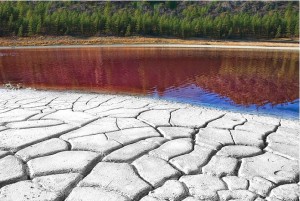 Lori Burgoyne has provided this image which we have also used on our index page as it demonstrates so well the extremes of this ecological reserve. It was taken on November 24 2009.
She comments: ” Mahoney Lake hosts one of the most dense populations of Purple Sulphur bacteria found in the world. The bacteria thrive at a depth of ~25′ where the temperature, salinity and amount of light create the photosynthetic conditions they enjoy. The ‘bloom’ was not on a few weeks ago when Mandy and I visited.” 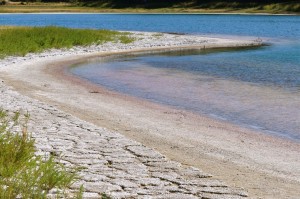 In this image from the Flickr site of Audio Surf, taken on August 16, 2011, the pink gradations of the purple bacteria, Amoebobacter  purpureus,show up. This lake is purported to have the highest concentration of this bacteria in the world.

See other references on this website  under research on Grazing of the Copepod Diaptomus connexus on purple sulphur bacteria in a meromictic salt lake. 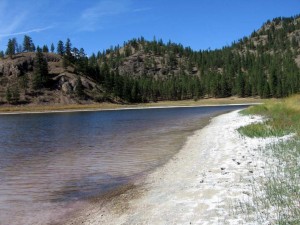 Darren Inouye  on his Flickr site has also  provided the following  images on this page of the purple bacteria, Amoebobacter  purpureus taken on September 5, 2005 in Mahoney lake. 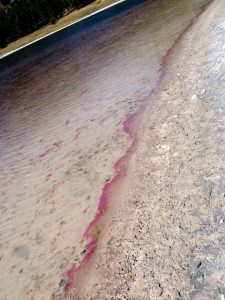 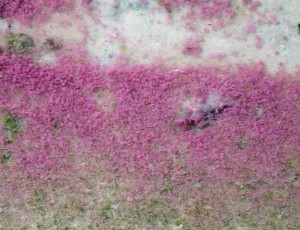 Along the lake edge, a solid line of Amoebobacter forms. 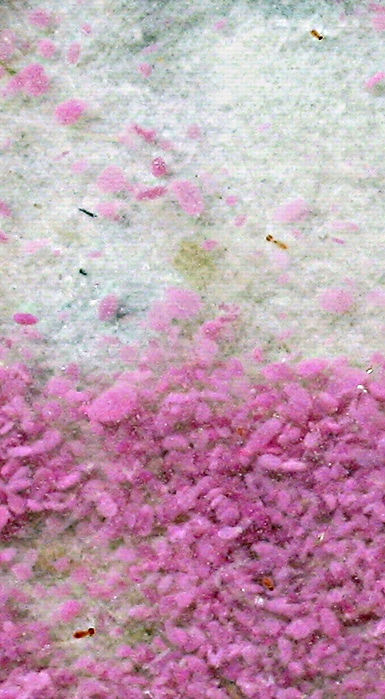 When I examined the image above right  close up, I was surprized to discover that Darren’s macro photo had also picked up the copepod Diaptomus connexus. There are at least three such copepods in the blown up version of the picture shown on the left.  Two darker red egg sacs trail a yellowish body.

These would be  visible to the naked eye, but not obvious unless you are looking for them  as they are probably less than 1 mm in length.

Thanks Darren for this serendipitous discovery.