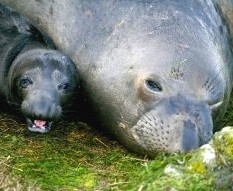 The continuing unusual incidence of Elephant Seal birthing in one of the most northerly haulouts for Elephant Seals has again happened for the fourth year at Race Rocks, The first pup born survived but was badly beaten by one of the resident males. In the last two years, both pups were eventually killed by the male. So far, this years pup seems to be faring well, and can be seen actively nursing on the Camera 1 webcam . The Ecoguardian Mike Robinson has been keeping an updated account of the new pup with images on the Ecoreserve’s Daily Log  and start at January 14, 2012.  http://www.racerocks.ca/wp/

The pup was named Squall because he was born in one!

The mother weaned the pup by leaving the island on February 9. As of February 21 , the pup is still on the island, losing the fat and growing longer. It should start venturing forth to sea in a week or two . 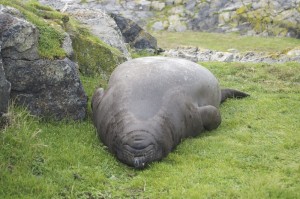 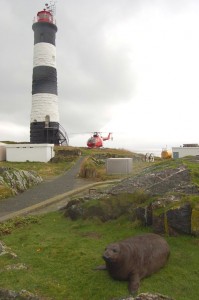 See the daily log for more pictures : http://www.racerocks.ca/wp/
Reference:
The book Elephant Seals : population ecology,behavior, and physiology By Burney J. Le Boeuf, Richard M. Laws gives an idea of what behaviour may be expected during this post weaning period:
Newly weaned pups began entering the water at 2 weeks  post weaning and 1 and a half months of age.  Time spent in water per day was less than 2% at first and was concentrated at dawn and dusk.  It increased to 52% per day by 10 weeks post-weaning. Being concentrated at night and remained this way until  departure on the first foraging trip at sea.

Duration of dives range from 1.9 minutes at initial entry to 6.1 minutes at the end of the post-weaning fast. During that time they did not venture far from the rookery and remained in water  up to 12 m deep

Further reference:
From the BC Parks point of view,  marine mammals are to be protected from human disturbance as  required under DFO law.  Since there is no precedence for a rookery of this species in BC, they do not have any species-specific policy, just that which applies to regular marine mammal rookeries.

The Canadian regulations do not specify elephant seals, just seals : “Always maintain a minimum distance of 100 m (300 feet) from any marine mammal in the water or on the shore to prevent a disturbance. Since that distance is impossible on Race Rocks, we just have  to ensure no contact.

The National Marine Fisheries Service, the Federal agency responsible for enforcing the Marine Mammal Protection Act in the US  recommends a safe viewing distance of 50 to 100 feet. If seals are looking at you, you may be too close! (http://www.bigsurcalifornia.org/elephant-seals.html)