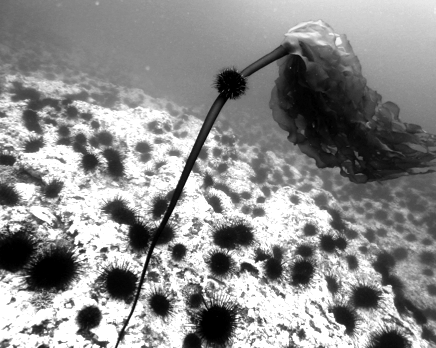 We used the extirpation, reintroduction, and spread of sea otters (Enhydra lutris) along the west coast of Vancouver Island, Canada, to evaluate how the otter–urchin– algae trophic cascade creates variation in rocky reef community structure over space and time. By repeatedly sampling both randomly selected and permanently marked sites in areas where sea otters were continuously present, continuously absent, or became reestablished during a 23-year study period, we found a highly predictable association between community phase states (algae abundant or urchins abundant) and the population status of sea otters. In areas where sea otters were continuously present, urchins were rare and algae dominated, whereas in areas where otters were continuously absent, urchins were abundant and algae were rare. Despite this predictability, the species composition and abundance of algae within otter- dominated sites and the abundance of urchins in otter-free sites were spatially and temporally variable. The transition from the urchin-dominated to algal-dominated phase state, brought about by sea otters preying on sea urchins, was documented; at some sites the transition occurred rapidly, whereas at other sites a short-lived transitional state composed of algal– urchin mosaics occurred. We experimentally demonstrate that this mosaic forms when living urchins flee from the damaged tests of conspecifics that are discarded by foraging sea otters, and kelp recruits into the urchin-free patches. Thus, although the phase state dynamics appeared to be stable and predictable based upon the presence or absence of sea otters, we found that spatial and asynchronous temporal variation in recruitment, mortality demography, succession, and prey behavior led to differences in the abundance and/or composition of species within the two phase states.