On September 27, 2011, Ryan Murphy, the Ecoguardian at Race Rocks observed a new event, a baby sea lion with its mother hauled out at Race Rocks. Traditionally this has only been a haul out for mature bulls and a smaller number of immature sea lions.

The photos in the gallery below were taken by Ryan  Murphy 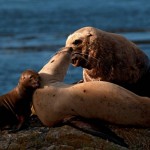 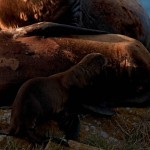 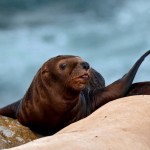 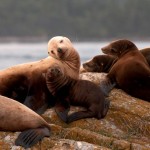 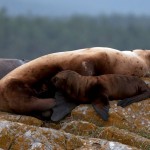 The following account is of what happened during the next few days:

“We have a nursing Steller sea lion pup on Great Race.  You’ll see in the photos that the mother is definitely lactating and the pup is nursing on the rock above the jetty (West side).  Since Eumetopias jubatus is listed under SARA as Special Concern, I believe this is very significant.  DND’s activity at Bentinck Island has not included intervals between blasts to reduce sea lion stampedes, and this pup is definitely at risk of trampling if DND continues their activities as they have for the past 2 days. “

“No need to worry about DND blasting, the landing of LGL personnel and subsequent standing around at the jetty caused a mass stampede with about 50 animals taking to the water including the pup.”

September 28, 2011 9:26:18 AM PDT
Just so you know, the larger blasts are still coming back to back.  I don’t know if LGL communicated the need for increased intervals, but regardless there is no change.  The sea lions continued to be disturbed and take to the water with the rapid succession blasts.

The pup has been back since at least 14:30.  I have not seen its mother and it is sporting a fresh 2″ cut on its shoulder.  Otherwise looks to be ok, it has been sitting upright trying to stay awake and nodding off as babies will.

The pup is still here this morning, the mother is not with it.

As per the log at 9:21 this morning: Two absolutely massive explosions that shook the house occurred only 10 seconds apart.  The glass panes in the windows rattled against their metallic frames.  At least 70 sea lions stampeded into the water, completely clearing out entire haul out areas.  About 20 sea lions stampeded through the area where the Steller pup was resting.

I  forwarded  the images and comments above  to BC Parks and DFO and DND with an expression of  my concern for the continued blasting with this event occurring. No response was heard from any of those contacted.