From: THE LOG   FRIENDS OF ECOLOGICAL RESERVES NEWSLETTER      AUTUMN/WINTER 2011

It has been several years since any gathering between Ecological Reserve wardens and Parks staff has occurred in the Lower Mainland, but on October 7, 2011, just such an event was organized by Bev Ramey (Co-Warden of ER#76, Fraser River Ecological Reserve) and Joanna Hirner (BC Parks Conservation Specialist). 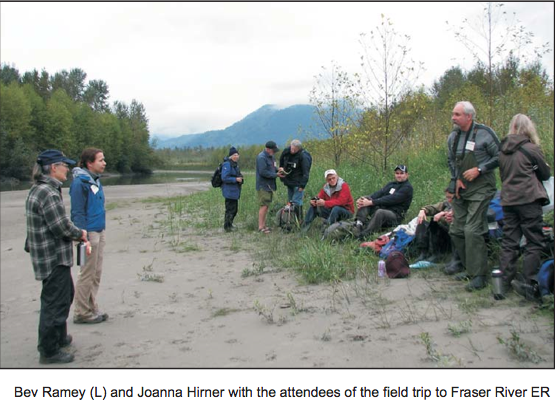 Very often wardens work in isolation from each other, and from BC Environment Parks staff in their area, so an opportunity to get to know one another was the order of the day. The trip to the Fraser River Islands Ecological Reserve gave wardens a chance to meet their fellow volunteers and communicate face to face with Parks staff. It was also an opportunity to visit an Ecological Reserve only known to a few, and a chance to discuss issues on a one-to-one basis. A grant from BC 100 Conservation Partners in order to provide boat access, made this field trip possible.

On the morning of October 7, 2011, participants gathered either at the Mission public dock, or Island 22 boat launch in Chilliwack, to board boats which then took them out to Ecological Reserve #76, a complex of mid-channel islands in the Fraser River between Mission and Chilliwack.

In addition to the wardens and BC Environment Parks staff, a number of other visitors were invited, including local stewardship representatives and technical and academic experts.

Shifting Gravel and the Boundary for ER#76

Once the folks from the two boats were assembled on the most downstream of the Ecological Reserve islands, geomorphologist Dr. Michael Church, Professor Emeritus, UBC Geography Department, used a series of aerial photos to show the islands’ evolution over the past 90 years. He indicated how the Reserve has been shaped by the river, with flood flows eroding in some places, and depositing sand and gravel elsewhere. Those parts of the islands that have been relatively stable for some time now support large stands of cottonwood trees and other well-established vegetation. 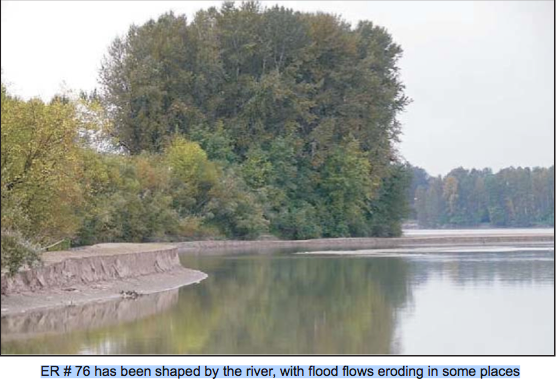 Dr. Church also talked about the gravelly fraction of the sediment load in this part of the reach. His recent work suggests that much of the gravel depos- ited between Laidlaw and Mission may have been mobi- lized by placer mining of gold upstream from Hope more than 100 years ago.    Dr. Church also commented on other aspects of the river behaviour in the area, and noted that the rates of river deposition and erosion are being altered as a result of the Fraser being artificially constrained

between rip-rapped banks. Ecological Reserve #76 was established for “the conservation of the only remaining unaltered and uncommitted lower Fraser River floodplain islands”. Located in the gravel reach of the Fraser, the islands are formed, shift and disappear through erosion and accretion. As a result, the current boundary does not include some of the islands.

In the discussion on historical changes to the islands, Dr. Church noted that rather than drawing a line around the existing islands, a better approach for the long term to best encompass the shifting islands would be one of the following three delineations:

a) include the gravel platform which is the base for the existing islands, although this does gradually change,

b) extend to the deep water channels of the Fraser River flowing past the gravel platform, or

c) extend to the high water mark (up to the dykes) on either side of the Fraser. This would be the best delinea- tion, but would likely be the most complex to establish. 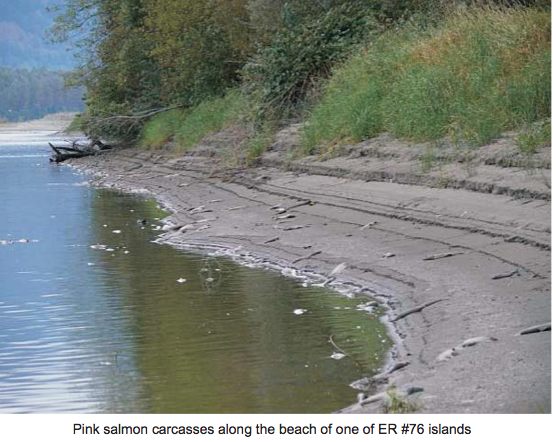 Pink salmon return to the Fraser River to spawn in odd numbered years, and there were many dead and spawned out adult fish along the river banks. It appears that this is also a year of high die-off before spawning, which is a regular and normal occurrence. To take advantage of this food source, several bald eagles were seen overhead on our arrival at the island. It was also noticeable how many fish carcasses were lying around as yet uneaten by scavengers or predators. Still, nature wastes nothing and some of the fish carcasses had been completely taken over by maggots. Needless to say, the smell in these areas was pungent!

Bear, deer and coyotes are among the larger animals living in the Reserve, evidence of which was seen as tracks or scat; unfortunately for us, these magnificent creatures, them- selves, remained out of sight.

One of the members of the trip, Dr. Marvin Rosenau who is an instructor at BCIT and scien- tist for the Rivers Institute at BCIT, provided some insights into our observations during the day. Walking over wide pebble and gravel areas where pink salmon had been in abundance, Dr. Rosenau and Dr. Laura Rempel from Federal Fisheries and Oceans, pointed out both false and functioning salmon redds and how a redd with eggs can be distinguished from other erosion spots in the river by the way small gravel has been

displaced out of the spawning depression and onto a mound on the downstream side.

Trees fallen along the eroding side of the islands enhance fish habitat by providing this large woody debris and reducing erosion of the islands.

Dr. Rosenau also discussed some of the issues relating to the catch-and-release sturgeon fishery in the lower Fraser River, a sport which is very popular in this portion of the river. Of note, almost every sturgeon in the lower Fraser River is, on average, caught at least once a year, and evidence of this level of effort can be seen by the number of hook-marks found in sturgeon mouths. These fish may live to be well over a hundred years of age and the current intense fishery, albeit catch and release, may have some negative impacts on this stock. It should be noted that the catch-and-release by- catch of the First Nations and commercial fisheries of white sturgeon also occur and there are impacts via these fisheries as well. In order to relieve this problem, the agencies and stewardship groups are now discussing seasonal closure and sanctuary areas for these sturgeon fisheries.

One of our bird experts, June Ryder, compiled a bird list of what we saw and heard during the day’s island visit, with input from all who had observations to add to the count. This resulted in 18 confirmed species plus two possible species for a total of 20 species. Many of the birds were gulls, ducks, or those found on or near water, together with Bald Eagles, ravens, crows, and birds of shrub and woodland habitats. The ongoing bird list for this ER, compiled since 1985, lists 63 species.

Botanist Terry Taylor compiled a plant list which included a few unusual specimens colonizing the newly accreting silt- rich bars of the islands. A high- light was the liverwort, Riccia frostii. Terry noted this was probably the most rare plant species we saw on the walk, but that it is not listed on the BC Species Explorer because, although mosses are listed, liverworts are not. 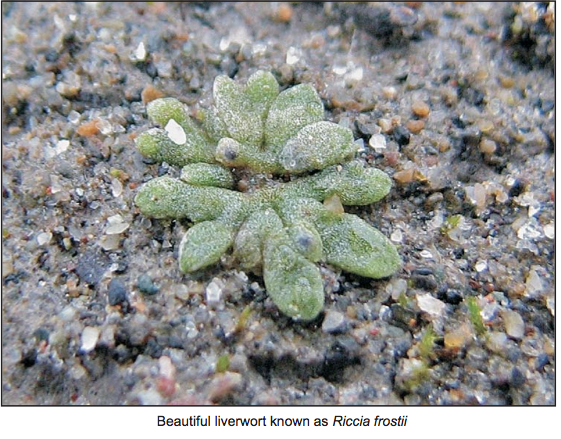 Wardens and BC Parks Discussion

While on the islands, Bev and Bill Ramey, co-wardens of ER #76, suggested areas of interest to walk, and people wandered off in groups, chatting as they went, which gave them a chance to interact with those they knew already, and others they had not met previously. Lunch contin- ued this opportunity as the group collected together in one place, creating a forum for wardens to share experiences both with each other and with Parks staff in an informal ques- tion-and-answer session. The seven wardens present had provided BC Parks staff with a list of issues for their reserves, prior to the field day.

Brandin Schultz, Regional Manager of BC Parks, intro- duced himself and expressed his pleasure that such an event had been organized, and thanked those who made it happen. He

mentioned that it should now be possible to make better connec- tions with Lower Mainland Park staff, located in offices at Cultus Lake, Alice Lake, Mt. Seymour, and on the Sunshine Coast.

During their turn, wardens were able to bring to light some of their concerns, such as encouraging Parks staff to visit the Reserves.

Joanna Hirner suggested an annual meeting with wardens and those on the tour thought this would be helpful, with suggested best times of November, January or February. It was also suggested that BC Parks staff would visit reserves with wardens. Interested war- dens should extend the invita- tion to their Area Supervisor and to Joanna, allowing as much advance notice as possible.

More gatherings and meetings such as this, it was noted, would be a valuable experience for all concerned. Although the lunch break was comparatively short, it opened the door for conversa- tions, which then continued as people wound their way to the boat pick-up spot on a gravel bar further afield.

It is hoped that the trip to ER #76 will be the start of re- opening channels of communication between ER wardens and BC Parks staff, and an example of how outings such as this can be beneficial to all concerned in learning more about each other’s Reserves. These trips facilitate getting to know those involved in protecting these important BC features, at all levels, and sharing expertise and knowledge among so many who have so much to contribute.

Historical photos (1928- 1999) as presented by Dr. Michael Church www.geog.ubc.ca/fraserriver Once on this site of the Fraser River Gravel Reach Studies, click on “Reports and Publications” and then under Atlas of the alluvial gravel-bed reach, click on “Full Atlas (80Mbyte)”. ER#76 is located in Reach 6 of this report, so look for the photo set for Reaches 5-7.