Reproduced with permission from: GoCampbellRiver.com

Twin Islands immediately adjacent to the mainland coast; It has been said that these two small islands that have souring peaks extending straight out of the water to heights of almost 1600 meters also have the 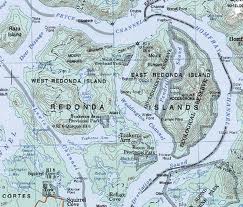 deepest waters of the inside passage.

It is no wonder the early explorers were frustrated with the bottom fishing as it is very likely they were no where near the bottom in their fishing attempts.

In 1835 there were two Salish Indian Villages with populations of about 100 inhabitants on both East and West Redonda and a summer village near Deceit Bay.  Remains of a stone circle, a type of weir used for trapping fish, can be seen between tides at the mouth of Lillian Russell Creek.  Other traces of the Salish a tribe long gone from the area, are ancient petroglyphs on the east side of Ellis Lake. 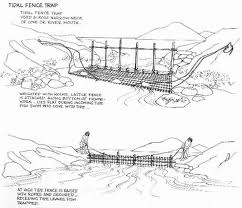 Both islands have remained to this day, sparsely inhabited and at their peak in history they laid host to a maximum of 100 people, however in 1922 the islands directory listed the area as having a shingle mill, cannery, general store and a post office.  Hand loggers arrived on the islands during the last quarter of the nineteenth century, where traces of their work showing old log chutes and remains of oxen skid roads.  The steep cliffs that ran down to the sea made it easy to get logs from forest to water and the many surrounding islands sheltered the log booms to be towed away. 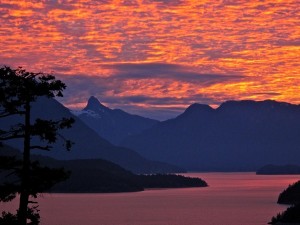 The most exotic event recorded to have happened in the history of the Settlement that was Redonda Island was the former ferry SS Transfer, a vessel which was decommissioned that had been used on a run from New Westminster to Chilliwack; now that she was no longer fit for public service she had been sent to Redonda to serve as a boiler plant for the cannery.  For a number of years the old paddle-wheeler lay on the beach, supplying steam for the Redonda Canning Company’s machinery and occasionally providing shelter from some of the workers.