An undercurrent of excitement filled the air inside the Brackendale Art Gallery (BAG) in the early morning hours on Sunday (Jan. 2). This was the silver anniversary of the annual Brackendale Winter Bald Eagle Count — the 25th year of counting eagles to contribute to a window of data on the raptors to ensure their ongoing protection.

Groups huddled together, sipping hot drinks. Calls of “Happy New Year” rang out, so apart from being a scientific expedition, it was a reunion of old friends.

The highly organized project ran as smoothly as a well-oiled machine. Fifty-one volunteers efficiently gathered their counting sheets and then dispersed on foot, by raft or kayak, binoculars in hand, with team leaders and small clusters of counters in tow. The teams covered an area totalling 40 kilometres, divided into 22 designated counting areas along the Squamish, Cheakamus and Mamquam rivers and their tributaries.

Our group was assigned to Baynes Island Ecological Reserve, located in the Squamish River, 10 kilometres north of Squamish. Established in 1975, the 71-hectare reserve protects important wildlife habitat. After donning rubber boots, life jackets and being 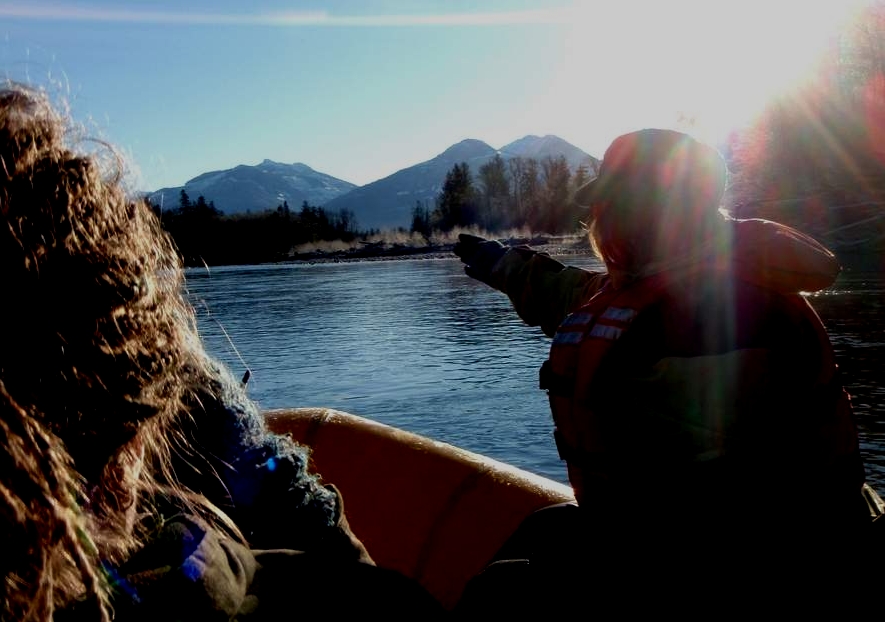 warned it was going to be “bony” on the river, meaning bumpy from rocks, our enthusiastic raft guide, Jessamy Freese from Sunwolf Outdoor Centre, and our team set off down the Cheakamus River under clear skies.

“It’s been like paddling through a slushy,” Wellnhofer said of rafting in icy situations in the past.

He also spoke of years where it snowed so heavily that it was difficult to see the white heads of the bald eagles because of the snow flakes.

The sunshine was welcomed by the counters this year, but it can, in fact, negatively affect the eagle count.

“On a day like today they’ll go up in the sky really quickly and look for food,” said count co-ordinator Patricia Heintzman, explaining that on rainy days eagles tend to roost in the trees, making it easier for them to be counted

Forging our way down the river, our progress hampered by rapids and rocks — overcome with some tricky manoeuvring and a great deal of teamwork — we eventually landed on Baynes Island and set off on foot to count eagles, following game trails and turning up with a scant total of 12 eagles, compared to nearly 500 in other years. The end of our day’s efforts culminated in our return to BAG to hand in our count results.

As the groups returned throughout the afternoon, the results were updated by Nina Rytter, one of the tireless eagle count co-ordinators who, along with Heintzman and Thor Froslev, bring the event together each year. Rytter mans the counting station at BAG, updating the Excel spreadsheet which is projected on the wall and fielding questions from a steady stream of curious tourists.

The last counters, from Area 5 — Pilchuk to Cheakamus — marched in at 2:55 p.m., marking the official end to the 2011 Eagle Count. The final number was 627, the third-lowest tally in the history of the count.

Heintzman blamed the low numbers of chum salmon returning to spawn in the Squamish River.

Heintzman noted that the sighting of a seal indicated that “…they’re cruising for food and there’s not a lot out there because you don’t normally see seals that far up,” adding that this one was more than 25 miles from the ocean.

On a positive note, nearly one-third of the eagles counted this year were juveniles, which is a healthy sign, she said.

But overall, more must be done to ensure healthy returns of all five West Coast salmon species, Heintzman said.

“I think the bigger picture is we have to evaluate how the salmon are doing,” she said.

“Are the fish farms on the coast diminishing our returns of chum?”

“Without education and awareness, without the scientific data to understand the influences on the ecosystem, catastrophic and incremental, without the dedication of so many volunteers and advocates, we would likely not have these special birds in our area and with that loss, there would likely be no salmon and other wildlife… it’s all connected,” said Froslev.

The Brackendale Winter Eagle Festival continues this month with a series of lectures, concerts, art displays and more at BAG. Visit www.brackendaleartgallery.com for more information.