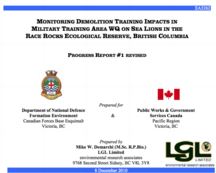 OVERVIEW
LGL Limited successfully completed 5 days of monitoring (28–30 November and 1–2 December 2010) of demolition training (Officer’s Course) in Exercise and Training area WQ. Monitoring comprised a day of pre-blasting, 3 days with blasting, and a day of post-blasting. We have not yet reviewed information on the sizes of the projects that were detonated, but expect that all were ␣ 4 slabs of C4 as per past courses. Projects within a run were spaced at a minimum interval of 5 min. Time between runs varied considerably (~0.4–3.2 hrs). All other ranges in WQ were inactive during monitoring. Weather was modestly overcast and unsettled. Although a gale warning was in effect for local waters during the first few days of the session, winds only reached 20 knots on one day (30 November); they were mostly below 10 knots for the session. Light rain fell at times, and swell height was moderate and high for most of the session. Seas were Beaufort 1–3. Air temperature ranged from 5–8 °C.

See the Complete PDF: lgl2010progreport
As per the table below, numbers of sea lions fluctuated considerably within and between days in response to natural and human-caused disturbances. There were no California sea lions in the Reserve and only 1 northern elephant seal. Significant displacement of sea lions from a haulout was observed in response to a single ecotour boat on the pre-blasting day and in response to blasting on days when the range was active. Only one ecotour boat was observed during the 5- day session, but that boat caused a disturbance that saw all sea lions become active (heads up) and most (~100) animals scramble off the haulout. Steller sea lion response to blasting ranged from modest increases in activity to complete haulout abandonment. The number of sea lions hauled out in the Reserve at the end of the session (i.e., at the end of the post-blast monitoring day) was practically identical to the number at the beginning of the session (i.e., 130 cf. 131). The total at the end of the session was off by a modest 20 animals from the peak count during activity samples (i.e., 150) – a difference that could be accounted for by animals not in view from the tower at their new location atop Area 2–5 at the end of the session and animals swimming near the haulouts. Although nearly all animals were on haulout Area 2–5 at the beginning and end of the session, they had shifted their position to the highest part of the haulout in response to large swells that inundated the lower reaches of the haulout. As of 7 December, the upper reaches of Area 2–5 continued to be used by most of the sea lions in the Reserve (as evident from the LBPC web cam).
No further monitoring is anticipated until summer/fall 2011.