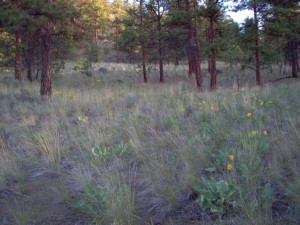 I was in the actual park for 1.5 hours this morning. It was cool for the
most part, but the increasing appearance of the sun warmed things up. The
only wind was a little near the top. I saw or heard 9 species of
birds, but none that were not expected. Unfortunately I missed the
Cassin`s Finch, but I did hear a lot of Red Crossbills. I recorded 5 plant
species in leaf, but missed the Mariposa Lily and the Sagebrush
Buttercup. The Bitterroot crop is plentiful this year. I removed 4- 5
invasive Sulphur Cinqufoil plants. Deer have damaged several small pines
by rubbing their antler velvet off on them. There were no rosettes of
knapweed, yah! I saw only the tracks and scat of a coyote.
I replaced about 8 fence staples and secured the rest by tapping on them
as many were working themselves loose. I saw no sign of human activity
other than the foot prints that I reported last month.
The reserve is in good shape and only the fencing that we looked at on
the 11th needs to be done. The reserve is at a perfect stage now for a
controlled burn to improve its productivity.

I spent a pleasant total of 1.3 hours of my birthday  in the ER yesterday. It was cool (6 degrees at 8am) and overcast for the most part,but the sun was out for a while and the breeze was minimal.. I saw or heard 10 bird species;the best being a hooting DUSKY GROUSE and a pair of MOUNTAIN BLUEBIRDS . This species nested on the ER for several years when I started my duties,but I seldom see a pair there now,despite a previous nest tree still standing where I see this species every year. Maybe this is the year they wil nest!

Needless to say, a lot of vegetation is in leaf,bud or flower.I found no knapweed in it’s expected location on the old road . I dug up only 3 of the invasive /Sulphur Cinqefoil/ plants,so my digging last year was successful. I sent Orville a separate note to tell him that I located the site of a 1974 UBC recording of the red-listed/ Dalles Milk-Vetch/ with the UTM he gave me. I also described the site and named the vegetation within 30m.Since it can be expected to bloom in May and June I will look for it then. I am also wanting to find another site for the red-listed /Narrow-leaved Brikellia/ that Malcolm Martin found in 2007,based on the information he gave to the CDC,but I recorded the UTM incorrectly this time and ended up at a known site. I will wait until May or June to follow up.

I saw no mammals and only a few deer tracks. Usually I find a small number of Mule Deer on west side of the east ridge.

The fences have not been damaged or vandalized.

I was accompanied for most of my 2 hours in the ER by Don Gayton. I appreciated him sharing his knowledge of the grasses we found, as grasses are not my forte! He says the ER is in pristine condition and that a prescribed burn is necessary to keep the pine trees from taking over as they are rapidly doing. I saw or heard 14 species of birds; unfortunately no Gray Flycatchers. We did see, however,3 Osprey flying over! I have previously recorded this species flying over the ER, but very seldom.

Many flowers were in bloom. The Columbia Bladderpod was especially noticeable. There were few toadflax beetles; Don figured that this was due to the cool weather. On the other hand, I pagan found no knapweed rosettes, so the root beetle has been very effective. We checked the 1974 site where the red-listed DALLES MILK-VETCH was reported, but found none. Tevor Goward found a few plants on the east side of Skaha Lake on May the 8th in 1922, so I thought that I would try the ER site today. The site is semi-shaded, so that may be problematic if it is even there. It may never have been numerous.
There was no sign of human activity. Some of the fence (rock)cribbing has rotted out along the N-S fence, but there is less pressure on the fence at that point and only one post has rotted at the base, so it is not a yet a problem .

I saw or heard 16 species of birds. I was pleased to see all 3 species on nuthatches, particularly good numbers of White and Red-breasted. I saw only a few Vesper Sparrows, one carrying food, but it would not reveal the nest location. I flushed a Common Nighthawk off the ground as it was no doubt sleeping after a long night on the wing. I did not expect to find eggs or young this late in the year and did not. I heard 2 and saw one blue-listed Gray Flycatchers. The latter was as close as any I have seen in 20 years; I could almost count the feathers!

Only a couple of plant species were in flower as one would expect at this time in a hot summer. Best of all, there was no Sulphur Cinquefoil where I had pulled out all the plants I could find in June. Again, there were no knapweed rossettes, so none at all this year. I thought that the wet spring may have brought them out as in the past, but not so. The toadflax is withering fast, between the effects of the heat and the /mecinus/ beetle. I saw few flowers and quite a few seed heads, but most were closed. So, since I found 2 larva in 2 seed heads, at widely separate locations, I hope that they are in most of the seed heads!

I saw no insects or reptiles and only a couple of small bear scat with Saskatoon seeds in them. I suspect that the Saskatoon berries dried up early and left few for foraging bears.

Finally, there was no sign of human activity in the ER and the fence at the talus slope still needs fixing; if and when you get the time and money to effect the repairs.

Here are the news.

Before I got into the ER I saw a dark Merlin on a snag where I have seen one a couple of times before.

I was in the ER for 2 enjoyable hours today,not including the hour to get there and back. After a few early rain drops, that morning was mild, with no or minimal wind.
I saw or heard 19 bird species and was delighted with this. Many birds are hanging out together as they prepare to fatten up and or store food for migration and winter.
Mixed flocks of nuthatches, juncos, siskins (there were a lot of them today), chickadees  and even a few Western Bluebirds livened up the otherwise calm morning.
I was ecstatic to hear and then see my first flocks (19 and 7) of SANDHILL CRANES! I heard 2 unexpected RUBY-CROWNED KINGLETS and saw a WESTERN TANAGER
and immature CHIPPING SPARROW. The last 2 species are not uncommon on the ER but I had not seen one for some time.

A few plant species had some flowers and one species was in bud (/Artemesia dranunculus / or Tarragon). The toadflax appears to have taken a beating from the bio-control
and the dry summer. There were few seed heads and those that I checked crumbled in my fingers . Again, I found no knapweed, so the bio-control has been significant.
I was surprised to find that the summer silver-gray Steppe-Mouse Moss was green! I assume that the wetter weather has got the photo receptors working again,but I don`t know.

The best part of the tour was watching a young BLACK BEAR,about 4-5 years old, foraging below a Saskatoon shrub on a slope from 20-25m! I turned back to avoid disturbing it
but it ran up the slope, fat jiggling, as I moved.

The old stile at the 12th green of the golf course has a broken leg and needs to be replaced as it is dangerous.
About 25m north of the stile, a short piece of fence need to be re-attached to a post or anchored to T-bar. As you know, the fence at the talus slope needs to be repaired.
There was no sign of human activity.

I was in the ER for 2.15 hours,not including about 40 minutes to walk in and out. It was a great day: sun, little wind, clear skies and 3 degrees at 8.30 am. I saw or heard 10 bird species, none of them unexpected. I was, however pleased to see a mound of droppings left by a Dusky (formerly Blue) Grouse as I usually see or hear the grouse, like the one I flushed just outside the N-S fence. I saw or heard no mammals.
There were no plants in bloom which was unusual I thought as I usually see one or two Scarlet Gilia and even a daisy at this time of the year. It appeared to my uneducated eye that there were fewer toadflax seed heads,probably due to the bio-control. The cactus is thriving in the reserve!  I found another patch of 15 Sulphur Cinquefoil plants where  found them 1n 2007; I pulled them all out.
The new style is well made and effective, it needs only some stain to be applied, which I will do next spring if I can get the stain and a brush from you. Just north of the new style a portion of the fence needs to be repaired with T-bar. Needless to say, the fence at the talus slope still needs replacing.
I was pleased to note that there was no sign of human activity except by that of Don Gayton doing his fire dendrology study. At this time of the year I was also very pleased to see no fence damage by deer hunters.

I was in the ER for about 2 hours plus travel to and from. It was very quiet with minimal wind, cloud, some sun and 4 degrees C at 8.15. There were trace patches of snow above 600m.
I saw or heard 7 bird species, about right for this time of year; all but one were expected forest birds. A lone magpie was a welcome surprise as I seldom see one in the ER as they are more grassland and human habituated.
No flowers were found, but I pulled out 3 Sulphur Cinquefoil plants that I missed among the 15 I pulled out last month. I also saw 3 small knapweed rosettes,  the first ones this year.
A fence post is rotted out at the top of the East ridge where Sara and Erin replaced fallen comrades last year with `T-bar. There are 9 posts along the fence at the talus slope that need fixing. Someone stole the ER sign from the fallen fence. There is also a minor repair job that needs doing on the fence at the 12th green of the golf course. Also, the new stile needs to be stained.
Speaking of the 12th green, I found 2 Ponderosa Pines, about 30cm. dbh. I estimate, cut down on the ER near the old stile and another of the same size cut down on the golf course side adjacent to the fence. The trees were live as evidenced by a few green branches left on the ground near the cuttings, The most egregious aspect of this is that the rest of the branches and bucked up trees were thrown into the Trout Creek canyon on the ER side and it appears that all but one log sled to the bottom, maybe into Trout Creek! All this was only about 2m from the site where 2-3 bug-killed trees were cut down on the ER, with Parks knowledge and approval, last year. I wonder if you or your colleagues are aware of this latest incident. No other sign of human activity on the ER, thank goodness!