In an e-mail I received in 2004, Pam Birley told me she was a grandmother living in Leicestershire England, and that she used the remote cameras on the www.racerocks.com website to help her grandchildren learn about the environment. She included screen captures of an eagle capturing a seabird at Race Rocks which she had stored on her computer in England. Indeed she was in tune with webcams in various parts of the world and still sends comments on how the loons are doing at a nesting site in the US or how various eagle cams are reporting. 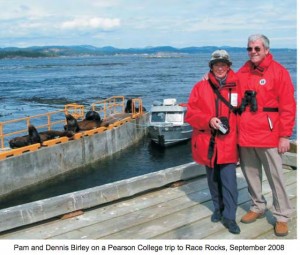 She did, however take a fancy to the remote camera at Race Rocks and started doing almost daily observa- tions and regular screen captures, putting them in monthly albums on her Flickr website. I realized that they provided the best monthly photo summary of what was happening at Race Rocks, so I included her photo albums as a regular feature on the Daily Log link on racerocks.com.
Pam was interviewed for an article about webcams around the world in The Province newspaper in 2006, where she was quoted as saying

“Racerocks is I think my most favourite site, mostly because I can get to control that wonderful camera and look at what I want to …It’s live and that’s the thing, so you never know what is going to happen next.”

One time I asked her if she ever got pictures of a nictitating membrane in the eyes of eagles. By the next day she had sent me
Pam and Dennis Birley on a Pearson College trip to Race Rocks, September 2008
several images to include on a page devoted to that: https://www.racerocks.ca/the-nictitating-membrane-of-eagles/
It’s now been a full six years since her first captures of the eagles and peregrine falcons from the remote cam at Race Rocks. The photo galleries from November 2004 to October 2007 are archived at http://tinyurl.com/ 2adrsp and the monthly albums from 2008 to 2010 are archived in the main diary file on racerocks.com.
We have relied on Pam to supply all kinds of useful information about the Ecological Reserve at Race Rocks, especially in the summer time as she is surveying the islands with the remote
camera well before most of us are up on this side of the world. Her sunrises are beautiful, and her storm images capture the spirit of the island so well. She also made the effort to remind us when a camera needed cleaning, and partly because of her we installed a daily automatic cleaning system for camera 5.
After one storm, she pointed out the missing shingles on the winch house, another time it was the first breeding of the elephant seals on Middle rock.
Two years ago, we heard from her about the first birth of an elephant seal at Race Rocks. Every year she is the first to point out the arrival and departure of the peregrine falcons and recently “Citizen Science…” continued from page 10
has captured them taking prey. In our taxonomy gallery we have added many of Pam’s pictures to the species pages. She has been able to alert us of migrant species, and rare bird occurrences, such as a snowy owl on the
island . With the multiple pictures she often sends, we have also been able to make time lapse movies.
In 2005 Pam made inquiries about the branded sea lions she was seeing at Race Rocks and came up with a contact a the National Oceanic and Atmospheric Administration (NOAA) who was responsible for the research tagging program in the U.S. She has established a good dialogue with the researchers there, and has assisted us in identifying the dates and sources of tagging of the individuals which have been photographed by her in the reserve:
The raw material provided by her monthly albums could now form the basis for an in depth analysis of a six-year record of the monthly bird and mammal occurrences in the Ecological Reserve.
We have been fortunate to have Pam and her husband Dennis visit us and we have been pleased to be able to provide them with a tour of Race Rocks several times in the last few years.
Pam has indicated she will be ending her service to us as monthly photo image diary keeper at the end of this year, but I know she will still continue to send us those exceptional shots when she gets them.
On reflection, I don’t know of any other Ecological Reserve in the province which has had such a regular and long-term image record of events made available by a volunteer, especially one from another continent! We owe a great deal of thanks to Pam for making her pictures available to us at her own cost. This is one example of “citizen science” which transcends borders but which is invaluable for the documentation of events and creatures on our ecological reserves here in BC. Our hats off to Pam Birley for a volunteer’s job done so well.
Following is a list of some of the birds and mammals which Pam has photographed with the remote cameras at Race Rocks, many being first records for Race Rocks. You may see her images in the Race Rocks taxonomy files or by using the search button on the home page