From: THE LOG    FRIENDS OF ECOLOGICAL RESERVES NEWSLETTER    AUTUMN/WINTER 2010 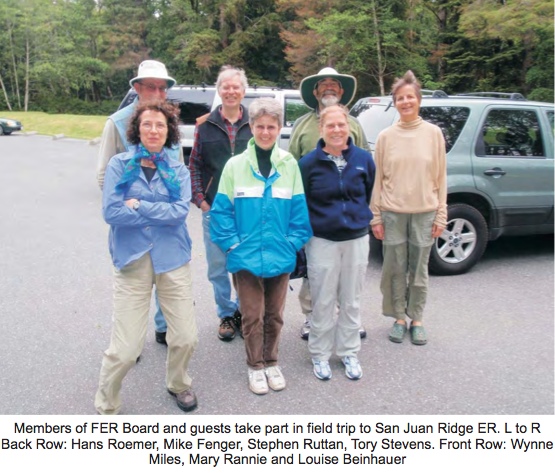 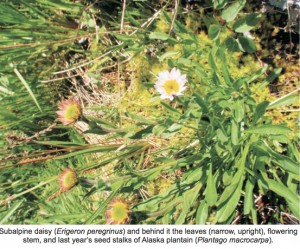 On a balmy day in June, Friends of Ecological Reserves Board members Mike Fenger, Stephen Ruttan (trip organizer), Mary Rannie and Wynne Miles along with guests; our guide, biologist Hans Roemer, MOE’s Tory Stevens, Fred Beinhauer and I car pooled along Highway 14 on our way to the San Juan Ridge Ecological Reserve.

About three kilometers west of Jordan River, our two-vehicle convoy turned off the highway and began an 18-kilometer upward trek on the Jordan River Mainline, an active logging road. 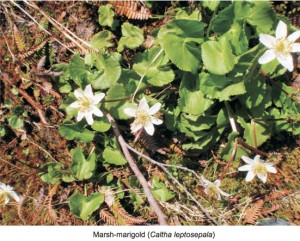 We stopped briefly on the way at a beautiful marshy area. After a short walk over boggy ground, Hans stopped to point out clusters of marsh-marigold (Caltha leptosepala) as well as subalpine daisy (Erigeron peregrinus), Western bog-laurel (Kalmia microphylla) and a plant that I found most fascinating, Round-leaved sundew (Drosera rotundibolia) that
exudes drops of sticky fluid which ensnares insects that not only pollinate the plant but feed it as well!
Then it was back into the vehicles to climb the rest of the way up the dirt road to an informal parking area. We hiked our way up the narrow road for another 400 metres or so and then turned north onto a small trail that took us to the Kludahk Trail. We were at an elevation of approximately 825 meters – subalpine! 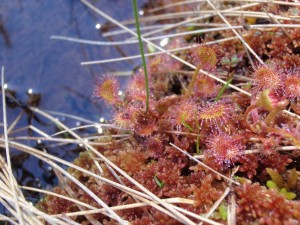 The Kludahk trail runs east to west for approximately 48 kilometers along the spine of the San Juan Ridge and passes close by the Ecological Reserve. The trail is managed by the Kludahk Outdoors Club who were instrumental in its cre- ation. Please see their website for more information (www.kludahk.com). This trail is snow-bound for almost seven months of the year, November to June and we hiked over many places with some snow still on the ground.
We travelled east along the trail for a few kilometers so that we could view the ER and admire another picturesque wetland area where tree frogs were chorusing. Hans knew every plant along the way – both their common and botanical names. 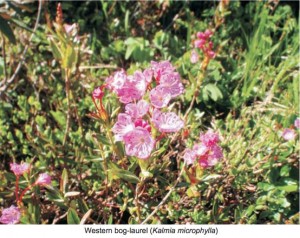 We decided to turn around and head west so that we could stop at one of the various huts along the trail. We were aiming for the Tea Hut, an interpretive centre with a wonderful view of the San Juan Valley far below. 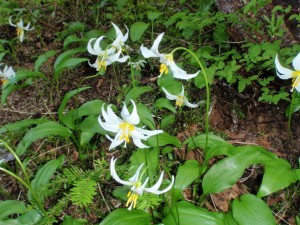 Along the way to the hut, we saw hundreds of beautiful blue-listed avalanche lilies (Erythronium montanum). They were the reason for our trip as they are most spectacular in mid-June. They bloom as the snow is retreating.
We also stopped at several tranquil alpine lakes along the way. Every lake and most meadows were named; there was even one called the Hans Roemer Meadow.
At one small lake, I made a half-hearted attempt to catch a Rough-skinned Newt in order to see the orange belly that Tory said they had which serves as a warning to would-be predators. Much to my surprise, I actually caught him and his belly was indeed bright orange. I carefully put him back into the water and we continued on our way.
We arrived at the Tea Hut and sat and ate our lunches, admir- ing the spectacular view and reading the information panels adorning the wall. All too soon it was time to return to our cars for the drive back to town.
The FER Board would like to thank Hans Roemer for being our guide for the day. Also thank you to Fred Beinhauer for providing the trip pictures that appear scattered throughout this newsletter.