Physical: This reserve is mostly noteworthy for its symmetrical, vertical columns of basalt, reputed to be the finest examples in the province. These are exposed on the northwest side of Cardiff Mountain, which is situated in the center of the reserve. Though rising only about 50 m above the gently rounded hilltop, the loaf-like profile of this crescent-shaped, flat-topped, volcanic remnant is recognizable from some distance. On the slightly concave western side of the mountain, vertical cliffs rise for about 35 m above talus slopes formed by disintegration of the lava columns. Slopes on the eastern convex side are inclined at about 45o. 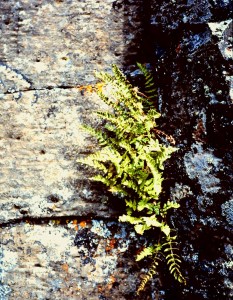 The lava columns, packed tightly together in the lower part of a vertical cliff and capped with masses of fractured basalt, are so striking that only a picture could do them justice. Each column consists of 20 or more blocks 30 to 40 cm in depth, each block having five to eight straight sides. Crustose lichens give the columns an orange tinge.
This small but varied reserve also contains several bodies of standing water. A teardrop shaped lake, about 300 m long, occupies the southeast corner of the reserve, while a large permanent pond is perched incongruously on the gently rolling upper surface of the mountain.

Biological: Most of the reserve has been burned fairly recently. Forest cover is dominated by seral trees like lodgepole pine and aspen, although Douglas-fir veterans are scattered along the basalt ridges and some Engelmann spruce and the occasional subalpine fir occur in a moist hollow. Dominant understory plants in lodgepole pine burns are pinegrass, kinnikinnick and rosy pussytoes. Kinnikinnick and pinegrass also characterize the scattered Douglas-fir stands, while aspen groves have an understory in which soopolallie, wheatgrasses, needlegrasses,
kinnikinnick and rosy pussytoes are abundant.
A unique biogeoclimatic relationship involves a small fern found in rocky crevices which has adapted from the cool, moist, shady environment to an open, dry, windy and hostile environment.

Research Opportunities: Fern population may be of interest to botanists.

Threats: Climate Change: Considering the early seral stages of much of the vegetative communities in this reserve, the most notable risk posed as a result of climate change may be the proliferation of non-native invasive species. The successional progression of the forest communities may also result in forest systems more typical of southern BC rather than those characterized by the Northern Spruce Sub-boreal Pine Spruce zone.Woodsia photo by Anna Roberts.