Note: At the time this was proposed, complete adherence to the process was not possible, so that intermittent informal monitoring only took place. From the original at:
http://www.racerocks.com/racerock/seabirds/nestsurvey/monitor.htm 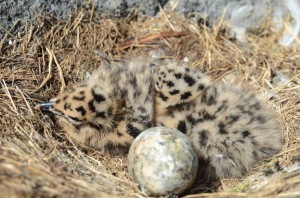 Long-term monitoring is a widely recognized method to examine population trends. Monitoring is a particularly useful tool for examining trends in marine bird populations because it encompasses long-term environmental and biological variation. Essentially, monitoring is repeated observations over time to determine the state of a system. It is important that protocols are designed in such a way that variables are easily measured and address the specific project objectives.

In this document, the term marine birds refers generally to those birds that forage in or near the ocean and breed in close proximity to it (e.g. gulls, cormorants, oystercatchers and guillemots). Marine birds are generally long-lived, have low reproductive output and are characterised with delayed maturity such that many species do not begin to breed until they are between 5 and 6 years of age.

A long-term monitoring program for nesting marine birds on Race Rocks Ecological Reserve has been established for Lester B. Pearson College of the Pacific and the Department of Fisheries and Oceans by the Canadian Wildlife Service. The objectives of this program are to collect reliable scientific data that can be used to 1) assess trends in marine bird abundance and recruitment at Race Rocks Ecological Reserve; 2) provide information for province-wide analyses of birds trends, particularly species of concern and 3) provide educational opportunities to students of Pearson College.

Further information regarding the inventory and monitoring of seabird colonies can be found in An Inventory Manual for seabirds at sea and at colonies in British Columbia (Resource Inventory Committee, 1995, by Alan Burger and Andrea Lawrence). This manual is a draft but can be downloaded from http://www.elp.gov.bc.ca/rib/wis/spi/ric_manuals.htm.

Seabird colonies are usually difficult to access and in British Columbia, are often protected as Ecological Reserves, Provincial and National Parks or Reserves. Surface nesting birds are very sensitive to disturbance and will leave their nest when humans approach, leaving eggs and chicks vulnerable to predation from gulls, crows, eagles and other predators.

It is important to minimise visits and disturbances to colonies because the breeding success of a species can be greatly affected by the presence of people. The following suggestions will reduce the impact the investigator and visitors will have on the breeding success birds at Race Rocks:

To record the presence of birds on or near Race Rocks Ecological Reserve.

Abundant, widespread breeders in all coastal habitats (Campbell et al. 1990a). Over the last 50 years, the population of Glaucous-winged Gulls in British Columbia has increased in numbers by about 3.5 times, and is expanding into new habitats, often near urban environments. However, recent surveys have found that some colonies are experiencing local declines. Within the Strait of Georgia, the number of nesting GWGU has declined by almost 16% (Sullivan and Hazlitt, pers. comm).

Initial visit in May, 1-2 day colony survey in June and July.

During the third week of May, note if laying is underway. Visit all GWGU nests beginning 15-21 June (earlier or later depending upon the year).

See this file on the Black oystercatchers food requirements

GPS unit to assist in accurate positioning of nests on map

Spotting scope to look for bands

Each year, survey all Black Oystercatcher nests on Race Rocks and surrounding islets. Conduct surveys during high tide and calm weather. Look for all known and any new nest sites. Your presence near a nest may increase the chance of predation so only visit nest areas to survey contents, thereby minimising disturbance.

To estimate the number of breeding Pigeon Guillemots on Race Rocks Ecological Reserve.

Initial count in May, 3-4 days of colony survey in July and August

GPS unit to assist in accurate positioning of nests on map

Pigeon Guillemots nests are widely dispersed and difficult to locate. It is generally not possible to determine the number of nests and breeding pairs by direct counts. No nest checks will be made in this monitoring program.