Physical:
Biological:
Most of the reserve consists of steep east to southeast-facing slopes formed by downcutting of Big Creek into the lava plateau. Small areas of more level topography include the Big Creek fan and terraces above the Chilcotin River. Surficial materials are primarily glacial till and fluvial deposits. Soils of grasslands and open woodland are mostly Chernozems. Some rocky outcrops and eroded slopes are present. 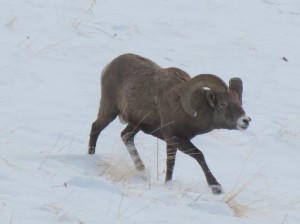 Natural climax grasslands which have not been subjected to livestock grazing are the main feature of this reserve. These comprise about 55% of the reserve area, occur largely on steep slopes, and are mostly dominated by bluebunch wheatgrass. A few Douglas-fir trees are scattered over the grassland. Douglas-fir forest, largely restricted to alluvial flats, basins and the plateau edge, covers 35% of the reserve. The remaining 10% consists of rock outcrops and eroded lands.
Six non-forested communities have been described: (1) bluebunch wheatgrass, (2) rabbitbrush-trailing fleabane, (3) Oregon woodsia, (4) needle and thread grass-Sandberg’s bluegrass, (5)spreading needlegrass, and (6) bluebunch wheatgrass-pinegrass. Three forested communities are present: (7) Douglas-fir-Rocky Mountain juniper-bluebunch wheatgrass, (8) Douglas-fir- pinegrass/kinnikinnick-moss, and (9) Douglas-fir-prickly rose with occasional paper birch and Douglas maple.
Several plants of the dry interior (giant wildrye; rabbitbrush; sagebrush; mariposa lily) are at the northwestern limits of their range in this reserve. The reserve is good winter range for Mule Deer and has capability for Bighorns. Black bears and Coyotes have been observed.

Research opportunities in plant ecology, vegetation-wildlife interactions and effects of climate change on community reorganization. It can be used as a permanent range reference area for ecosystem classification.
As a climax grassland community without domestic grazing, it would make a good place to study the relationship of disturbance to invasive weed ingress (or lack thereof).