Physical: Woodley Range is a prominent NW-SE-oriented ridge with a steep escarpment to the southwest, facing the head of Ladysmith Harbour, and more gentle, smooth slopes towards the northeast. The reserve is located on the moderate NE-facing slopes, except for the extreme southwestern corner which overhangs the escarpment. Soils are generally shallow and are derived from underlying sandstone bedrock and conglomerates of the De Courcy Formation.

Biological: The vegetative cover of the reserve is divided between forest, open and dry meadows, and wetlands. The open meadows are of particular interest as they provide most of the plant species richness. Glacier-polished, smooth sandstones with very shallow soils and localized springtime seepage support colourful spring flora and rare plant occurrences. Drought and fire have very important functions in maintaining the present vegetation pattern in both the meadows and the forested portions. Forests on Woodley Range are mostly second- growth dry Douglas-fir and arbutus forests developed after logging and/or fire. On sites where water drainage is relatively slow, soils are nutrient rich and stands are dominated in their earlier stages by deciduous trees, including bigleaf maple and red alder. In later successional stages or where residual trees were left during logging, western redcedar, grand fir, western hemlock, and Douglas- fir predominate. The understory is dominated by herbs and include sword fern and vanilla-leaf. Small-forested wetlands occur in a few areas of the reserve, with salmonberry and herb layers of ferns, skunk cabbage, and slough sedge.
A larger, open wetland is located in the flat area in the western part of the reserve. This is the only portion of the reserve that drains to the southwest, down the steep escarpment. It supports stands of hardhack, crab apple and willows. Bog bird’s –foot trefoil (Lotus pinnatus) occurs in the stream exiting the wetland.

Naturally tree-less upland areas are rare on Vancouver Island and this is an area where open glades and meadows on very shallow soils provide habitat for many plant species and several plant communities that are uncommon in the surrounding landscape. The reserve protects a diversity of 187 vascular plant species; 27 of these species are considered at least regionally rare. Rare plant species include: dune bentgrass, slim-leaf onion, white-top aster, green-sheathed sedge, Nuttall’s quillwort, Howell’s violet, and bog bird’s-foot trefoil.

Cultural: No known cultural sites are present in the reserve. However, many of the plant species present were used by First Nations and it is likely that they gathered plant material in both the meadow and the forest.

Bull frogs have invaded the wetlands and are dominating the species: ecosystem.

Scotch broom is located in some of the meadows that are habitat for listed species such as Bog bird’s-foot trefoil and white-top aster. The ER Warden has been trying to keep it under control.

There is potential for the invasion of carpet burweed which could change the character of native ecosystems. This species is introduced by human vectors when seeds are carried in on boots. It 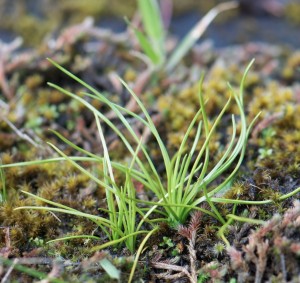