Physical:The reserve consists of two blocks, the lowermost on the gently sloping fan of St. Alice Creek on the floor of the Skagit Valley, the upper block on northeast oriented mountain slopes between St. Alice and McNaught creeks. Surficial materials between bedrock outcrops on the steep slopes are colluvium and till; those on the old creek fan are of glacio-fluvial origin.

Biological: The most significant feature is a large population of the showy, pink-flowered, Pacific rhododendron, a rare plant which in British Columbia is restricted to the Skagit River watershed, possibly the Chilliwack River valley, and two small sites on Vancouver Island. Its characteristic habitat is shaded evergreen forest on dry gravelly terraces.

Rhododendrons in the reserve are growing in two quite different habitats. The lower block contains typical habitat, predominantly Douglas-fir and lodgepole pine forest on strongly-drained alluvial and floodplain deposits. Western hemlock and western redcedar occur as sub-dominant trees; Pacific rhododendron, falsebox and Oregon-grape are abundant shrubs; the mosses Rhytidiadelphus loreus and Hylocomium splendens provide extensive ground cover. In the upper, steeper block, the forest is dominated by western hemlock and western redcedar, and Douglas-fir is less common. Dominant understory shrubs are red huckleberry, falsebox, Oregon-grape and Pacific rhododendron, although the latter is restricted to open forest stands near rock outcrops. Seedlings and older specimens of rhododendron are present in both blocks of the reserve. Rhododendrons in this area appear to be associated with sites having a history of forest fire.

The Historical Whatcom Trail traverses the reserve. It was used by First Nations as a trade route and also provided Americans a route to gold discoveries in British Columbia during the 1800s. 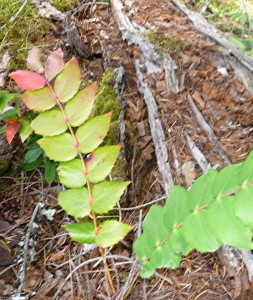