Physical: The reserve lies in the Skagit River valley, bounded in the west by the Skagit Range and east by the Hozameen Range. Local peaks rise to the 2150 m elevation. It is primarily on the alluvial fan of Shawatum Creek, which slopes gently to the southwest. The surficial deposits are generally coarse and well- drained. Annual precipitation, about 110 cm, is intermediate between the coast and dry interior due to a partial rain-shadow caused by the Skagit Range. 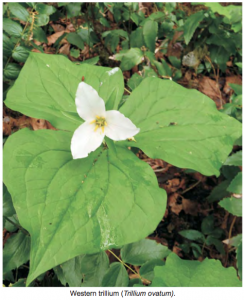 Biological: Several coastal plants such as vine maple and devil’s club are at their eastern limits of dis
bution in this valley, and several interior plants are found no further west. Douglas-fir stands here are spatially well separated from and at considerably higher elevation than most Coastal Douglas-fir forests fringing the Gulf of Georgia, suggesting that assignment to the Interior Douglas-fir Zone is appropriate even though many coastal plants occur in the valley.

Douglas-fir is the dominant tree over most of the reserve, although shrubby alluvial areas with few trees occur in the eastern half. Typical Douglas-fir woods contain some western redcedar and western white pine, have a tall shrub layer dominated by vine maple and considerable vanilla leaf in the herb layer. Other common plants are Oregon-grape, trillium, queen’s cup, sweet- scented bedstraw, wild ginger, one-leaved foamflower, Hooker’s fairybells and the moss Rhytidiadelphus loreus. In more moist sites there is a Douglas-fir- western redcedar association in which black cottonwood may occur and devil’s club, lady fern and mosses of the genus Mnium are characteristic in the understory. Other plants in this type include spiny wood fern, oak fern, yellow violet and star-flowered false Solomon’s-seal. Well drained gravelly outwash fans support kinnikinnick and falsebox.

Cultural: Transecting the reserve is the Whatcom Trail, an historic trail founded in 1858 and used by First Nations and settlers as a trade route.