To protect a highly diverse mosaic of ecosystem types from aquatic, peat bog and forest to dry-site ecosystems.

Physical: The reserve comprises gently undulating lowlands formed by glacially scoured rocks of the cretaceous Nanaimo Formation. For the most part the cover of surficial deposits and soils on the NW-SE trending, rounded ridges is very thin and some portions show open rock outcrops. Small lakes, ponds and wetlands occupy the depressions. A stream originating in Long Lake diagonally traverses the rectangular reserve from NW to SE. It forms a steep gully in its mid-section.

Biological: Sloughs, marshes and ponds, many of which have been dammed by the resident beaver population, cover about 10% of the property. Except for small, open meadows and rock outcrops, the remainder is forested.
Major documented plant communities include open Douglas-fir Arbutus forests, Douglas-fir Salal, western redcedar swordfern, and red alder slough sedge forests. Sweet gale peatmoss, Labrador tea peatmoss, pond lily watershield and a variety of other, smaller-scale fen and marsh communities are associated with wet areas and open water. These sensitive ecosystems provide a habitat to rare and endangered bog plants, notably the humped bladderwort (Utricularia gibba), slender-spike mannagrass (Glyceria leptostachya) and the BC endemic Vancouver Island beggarticks (Bidens amplissima). Elsewhere in the reserve, shallow, dry soils are occupied by moss/grass meadows and several Garry oak trees. These meadows are home to a wide variety of mosses, spring wildflowers, and grasses.

Most of the forests were logged about 80 years ago. However, impressive pockets of mature cedar and grand fir remain east of Long Lake.

This area provides habitat for waterfowl and aquatic mammals such as beavers and otters. Small-mouth Bass, Pumpkin-seed Sunfish and Cutthrout Trout are likely residents in the lakes. Black-tailed Deer are resident.

Cultural:Unconfirmed report of an early logging camp used by Chinese workers that were also employed on railroad construction in the area during the late 1890s.

Climate Change: Wetlands are one of the most at-risk ecosystems in a warmer climate due to increased evaporation and changing precipitation patterns. Maintenance of the Beaver population will help keep the area a wetland.

Non-native Species: Bull Frogs have invaded the wetlands and are dominating the ecosystem and preying on blue-listed, CF Priority 1, Red-legged Frogs.

Pumpkinseed and Smallmouth Bass are likely residents in the lakes. They will change the ecosystem by eating eggs of native amphibians.

Recreation: There is potential for the invasion of carpet burweed (Soliva sessilis) which could change the character of native ecosystems. This species is introduced by human vectors when seeds are carried in on boots. It generally colonizes disturbed areas.

Illegal recreational activities such as ATV and motorbike use of trails and equestrian use are negatively impacting ecosystems through degradation of vegetation, trail erosion and noise pollution. The reserve is adjacent to a regional park with connecting trails and is a popular area with the local population. 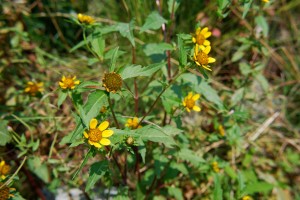 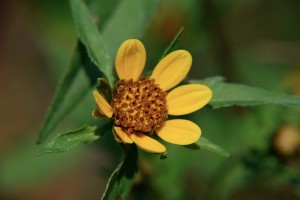