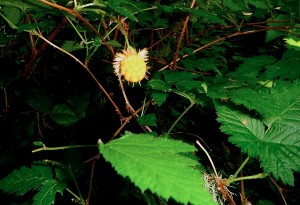 Baynes Island, except for narrow gravel bars at its perimeter, is completely forested. One community of shrubs and four forest communities have been described. Shrub stands, of limited extent, are dominated by the tall shrubs Pacific willow and Pacific ninebark. Black cottonwood-red alder woods, with an understory of salmonberry and red-osier dogwood, cover much of the island. On drier sites the cottonwood stands contain bigleaf and vine maples, and hazelnut is a common understory shrub. Lastly, wet depressions support red alder trees in association with red-osier dogwood, skunk cabbage, and water-parsley. Additional trees recorded on the island are grand fir, Sitka spruce, and western

redcedar. Four species of ferns and seven of mosses have been noted.

A variety of birds, including warblers, thrushes, wrens, woodpeckers, chickadees, juncos, and kinglets has been observed in the reserve.

See the PDF from BC Parks: baynes pdf

The reserve is an island on the Squamish River floodplain, surrounded by mountains of the Coast Range which rise to over 2000 m. Baynes Island is located where the active, high-gradient Cheakamus River enters the lower gradient Squamish (1.25 m/km) and deposits much of its coarse-grained bedload. The Squamish River is subjected to extreme variations in flow, the lowest recorded daily flow (11 m3/s) being 200 times less than the maximum daily flow (2240 m3/s). Rainfall and snowmelt events result in frequent flooding of valley bottom lands, and in erosion and deposition of material. The highest mean monthly flows are normally in June, the lowest in March. Baynes Island soils are largely poorly developed Regosols on alluvial deposits. Local climatic events include fall and winter storms funneled up Howe Sound between high mountains, strong outflow winds (“Squamish winds”) in winter, and summertime convective showers.

Changes in stream flow and timing related to extent of glaciers in watershed as this changes with climate change.

Glaciers in British Columbia are projected to continue to melt as the temperatures continue to climb in future years. The Squamish River is fed by glacial meltwater, and as such may be subject to increased flooding and subsequent erosion of its banks, including the banks surrounding this reserve. Habitat loss and changed hydrology may result.

Storms are also projected to increase in frequency and intensity. The storms that funnel up from Howe Sound and the strong “Squamish winds” could increase, possibly resulting in increased levels of disturbance on the island.

Private property that border the reserve was logged which may effect the hydrology and associated salmon habitat as well as disturb the wintering Bald Eagles.

Habitat loss is resulting from increased flooding of the Squamish River.

An independent power project is planned for the south of the reserve making the reserve a potential corridor which poses a direct threat to the integrity of the ecosystem.

Habitat loss will result if BC Hydro requires trimming of vegetation beneath and around power lines.