(This statement is intended for use in conjunction with the descriptive text and map pages supplied in the “Guide to Ecological Reserves in British Columbia”). 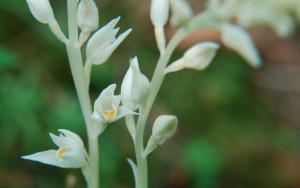 A small population of the rare and endangered . The orchids are not consistently flowering every year. As many as 100 specimens were observed by the donor and former owner of the land about 20 years ago and as few as four have appeared in some recent years. The presence of the orchid is not possible to ascertain without flowering parts because vegetative shoots are not produced by the plant due to its saprophytic nature. Several specimens were reported to grow just outside the boundaries in 1988. The life history of the species and decisive factors for its well-being are largely unknown.

The reserve land was in part donated and in part sold by Mrs. Katherine Tye to the Nature Trust of British Columbia and is now leased to the crown on a 99-year term to preserve and/or develop it “as a site of ecological interest for the use, enjoyment and benefit of the people of British Columbia” (compare attached lease). If in the opinion of the Nature Trust the use is not in agreement with the intent of the lease, the lease may be cancelled.

Management Actions Required and their Priority:

2. No insect and disease control desired.
(LEASE NOT ATTACHED)