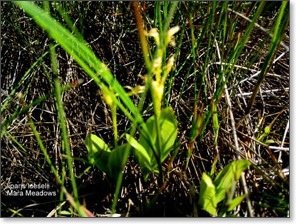 John Coffey is now the warden at Monica Meadows. Not more than 10 people can ever invade the meadows at one time, in order to preserve what is there. At one point I had 14 people who had indicated they would like to go, and I thought I would have the difficult task of telling some who had phoned later. We had to go on Friday July 9th, because John had another obligation on Thursday. This meant everyone who had phoned and was still able could go. Six of us drove out from Vernon to meet John and Tom at the junction of Grandview Bench and Edgar roads. Judy arrived a bit later and invited us back to her place below Enderby cliffs to eat our lunch.

John led us towards the Larch Hills ski area parking lot. We took a right turn just before the parking area and drove on various gravel roads until we reached a road closed to traffic and now with a ground cover. We parked and followed this road almost to the end, but took a more overgrown track which led down to the meadows .passing a track into the woods, which we used later to access the marshes. First John went down to the end of the road to the meadows near the beaver dam which creates this wet, area in order to take a water level measurement. He did this at several places on our adventure. 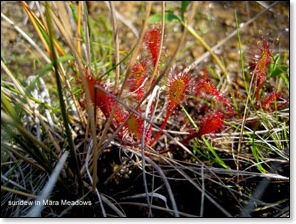 We returned to the- almost a trail- through the woods. I got quite scratched wearing shorts. Then we entered the wet area, which was quite uneven and we needed to step carefully. Lots of cotton grass was blowing below some willows. There was one deeper patch to wade through. One of my feet got sucked under and I almost fell. I did get an uncomfortable wet seat. Three people had to pull me out after I was able to back my leg out of the blockage. After that although still wet the route was easier. On the route in, we had seen lots of lovely wild flowers including a pink pyrola, and once in the marshes we saw Kalm’s lobelia of which I was unable to get a clear picture. We also spotted a twayblade or liparis loeselii our club emblem. In 1965, Jim Grant together with Joan Heriot and Kay Bartholomew had noticed this plant, not usually found this far West.

Further into the meadows near a very wet area, which John described as quicksand, we found more sundew plants.  The earlier sundew plants had been difficult to see or photograph, but these were magnificent and I got some good pictures. 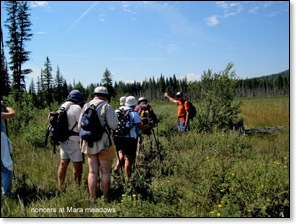 Years ago, before this area was protected, someone had created a drainage channel across the marsh.  Luckily the beavers have maintained their dam, so the meadows are preserved.  We followed the drainage channel, but had to return to the route where we had entered the meadows recrossing that deep part safely.

Back at the cars some of us were hungry and wet, so we took our wet shoes off and ate our lunches on a log near the cars before driving back.

Later Tom sent me a list of some of the flowers seen, but was surprised to find he had copied the liparis loeselii incorrectly. Gail sent me a list of birds seen or heard. I had seen the killdeer, violet green swallows and other birds. Gail mentioned a sora, a Western wood pee wee, a Swainson Thrush, a Wilson snipe, and black capped chickadees, tree swallows and other more common birds I had also seen.